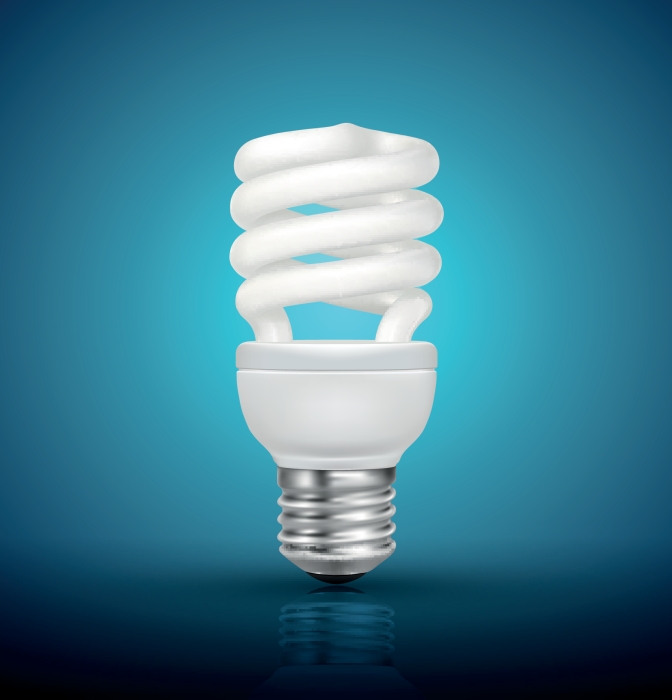 Fluorescent lightbulbs use less energy than traditional incandescent bulbs, but many contain mercury, a neurotoxin that can accumulate in food sources and ultimately in our own tissues. Removing and reusing mercury from bulbs helps keep the toxic element out of landfills, where it can enter the environment. Now, researchers have developed a technique for recycling mercury from spent compact fluorescent light bulbs that’s more energy efficient than current methods (ACS Sustainable Chem. Eng. 2016, DOI: 10.1021/acssuschemeng.5b01612).

Existing recovery methods often require high temperatures to evaporate the mercury, separating it from the other material inside the bulbs. Parisa A. Ariya of McGill University and her colleagues wanted to devise a technique that used natural, nontoxic compounds and minimal energy. Instead of heat, they used nanoparticles to trap the mercury.

Ariya’s group looked at two kinds of nanoparticles made of different forms of iron oxide, magnetite and maghemite, which they had found to be efficient at capturing various gases, including mercury. The particles’ magnetism makes them easy to transfer, and they exist in vast quantities in the environment as components of atmospheric dust particles. An initial test showed that in a flask, magnetite particles captured mercury vapor much more efficiently than maghemite, so the team focused further work on magnetite nanoparticles.

To test the particles’ performance with real bulbs, the team broke open spent fluorescent bulbs within a vessel that was connected to a chamber loaded with nanoparticles and to a gas circulating pump. Mercury vapor from the bulbs flowed into the chamber and stuck to the nanoparticles’ surface.

The team’s prototype required only 20 W of power, little enough that a small solar panel could power the setup. The power requirements for a real-world system to remove mercury quickly and completely might be higher, since the study focuses more on the capture of mercury vapor released when the bulb breaks, says Robert H. Hurt of Brown University, whose group has also investigated using nanoparticles to remove mercury. But mercury can remain in trapped in the white powder coating in the bulb’s glass tubing, which would require additional heat to extract.

Although few products use mercury anymore, mercury recovery is still crucial, Hurt notes. The World Health Organization counts mercury among the top 10 chemicals of major public health concern. Hurt cites the “easy separation” of mercury from the magnetite nanoparticles without heating as a major strength of the technique. Ariya’s team is currently talking to environmental and governmental agencies about launching pilot studies of the technique at places like light bulb factories and local waste disposal sites.

Comments
Robert Buntrock (April 22, 2016 3:08 PM)
As far as I know, all fluorescent lamps, including CFLs have at least some mercury in them. This is necessary to strike the initial arc to start the lamp. What also needs improvement is recycling collection centers. Just a few years ago there were over 100 spent CFL collection centers in the State of Maine alone but recycling bigger, tube fluorescent lamps is more difficult.
Reply »