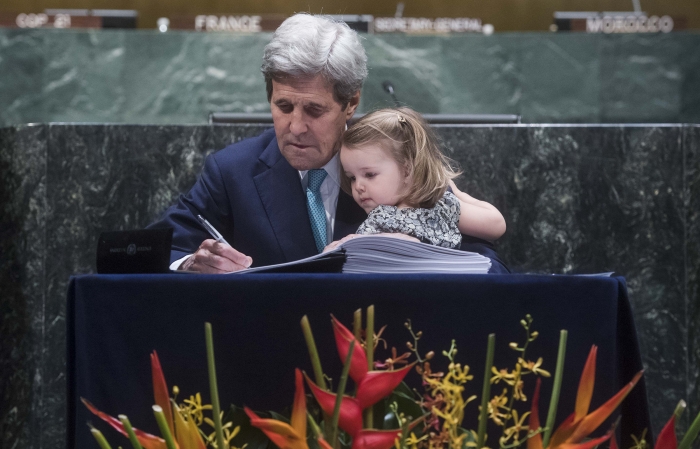 Last week’s signing by 175 countries of a new climate change agreement that requires every nation to control its greenhouse gas emissions marks the first step to turn that accord into action.

Officials inked the pact, which was completed last December in Paris after years of negotiations, at an April 22 signing ceremony at United Nations headquarters in New York City. They set a record for first-day signatures of an international agreement, according to the UN.

“You are signing a new covenant with the future,” Ban Ki-Moon, UN secretary-general, told the officials.

Now that most of the 185 countries that hammered out the Paris Agreement have signed it, the next step toward putting the deal into play involves domestic action by each country.

The accord will officially take effect when 55 countries that collectively account for at least 55% of world greenhouse gas emissions individually submit formal ratification documents to the UN Those papers will attest that a government has laws or regulations setting the country on course to meet its emission control pledge under the Paris Agreement.

During the signing ceremony, more than a dozen developing countries—mostly small island nations whose very existence is threatened by sea-level rise caused by climate change—submitted their ratification documents. These nations, however, contribute little to global greenhouse gas emissions.

China and the U.S., the world’s two largest emitters, announced they plan to ratify the deal later this year, as did Argentina, Australia, Canada, and Mexico, among a handful of other countries.

In addition to taking domestic actions, countries are involved in international talks related to the Paris Agreement. Starting in May, negotiators will work on fleshing out details of how countries will report publicly about their emission control efforts. Discussions will also focus on how to provide $100 billion per year by 2020 to help developing countries decarbonize their economies and adapt to climate change, a target set in 2009. Countries will gather for the next global climate change conference in Marrakesh, Morocco, on Nov. 7–18.

Under the Paris Agreement, 185 countries and the European Union pledged to rein back their greenhouse gas emissions. The stated goal of the accord is to keep global average temperatures to “well below” a 2 °C rise above preindustrial levels by 2100. But if all the emission-control pledges are fulfilled, temperatures are expected to increase 3 °C by the end of the century.

To restrain temperature hikes to 2 °C or below, the pact calls for countries to revisit their pledges every five years. Negotiators are hoping that governments will make stronger emission control promises in the future as technology for renewable energies and to capture and sequester carbon dioxide improves and gets cheaper.