Smart surfaces on a roll

By patterning sheets of plastic or metal with nanostructures, materials scientists can turn them into antibacterial, self-cleaning, or drag-resistant coatings. A nanoscale printing technology that uses precisely formulated resist materials can make these kinds of smart surfaces fast and at large volume (ACS Nano 2016, DOI: 10.1021/acsnano.5b07411). 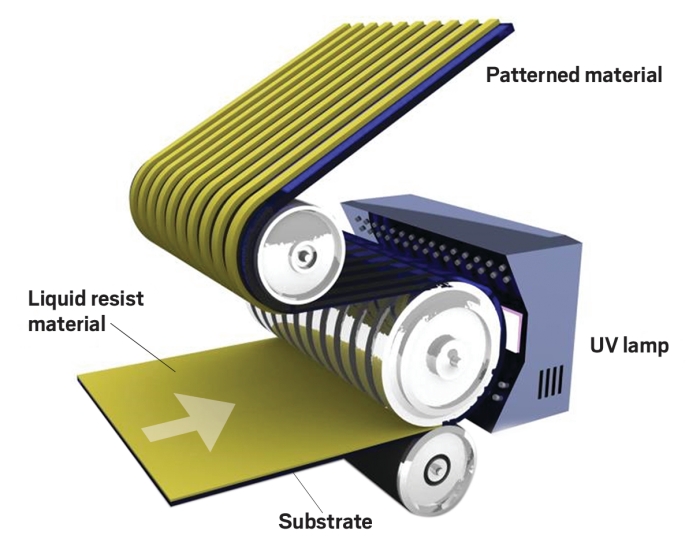 Barbara Stadlober, a materials scientist at Joanneum Research, a government research center in Austria, and colleagues have been working to scale up nanoprinting to industrial speeds over a large surface area without compromising on resolution. They’re building on a method called roll-to-roll UV-assisted nanoimprint lithography. This printing technique uses rotating cylindrical stamps to continuously and rapidly impress patterns onto moving sheets of material, from paper to polymers. The sheets are coated with a polymeric resist that hardens when exposed to ultraviolet light, curing the stamped pattern. The sheet material can then be used as-is, or coated with metal on the same roll-to-roll machine and pulled off, leaving the patterned metal behind.

The group has improved on previous systems by printing over larger areas, and tailoring the machinery and resist materials to improve the resolution. The system can continuously print features ranging from 100 nm to 25 μm on a substrate 250 mm wide, and at speeds over 10 meters per minute. Other teams have achieved these impressive size or speed benchmarks, Stadlober says. What’s new is bringing good speed, resolution, and area together in one printing system.

Careful tailoring of the resist materials is key, says Stadlober. The mixture of organic compounds in the resist control the material’s mechanical properties, viscosity, adhesion to the stamp, polymerization, and hardening. By playing with the recipe, Stadlober’s group tailored the materials to make them work better in this kind of printer. A good resist will cure rapidly so that the printer can go faster. But it can’t get too hard too fast or it’ll get stuck to the stamp. Also, the researchers can create resist materials with different elasticities, which allow the printer to create different types of three-dimensional structures, such as mushroom shapes with undercut features.

The Joanneum group used the technique to make superhydrophobic plastic coatings and transparent electrodes consisting of an invisible nanoscale grid of metal wires. These electrodes could potentially be less expensive than the indium tin oxide electrodes found in cellphone touchscreens and other electronics.

C. Grant Willson, a nanoimprint lithography specialist at the University of Texas, Austin, is impressed with the performance of the system. “It pleases me to see that the materials are being carefully investigated, and all attention is not focused on the hardware,” he says. He adds that there’s room to keep improving the process—for example, by speeding it up, and with further innovation in the materials design.

Stadlober says even greater resolution is possible. The group is also working on resist materials that can be cured with heat rather than UV light, which may be more compatible with industrial systems.