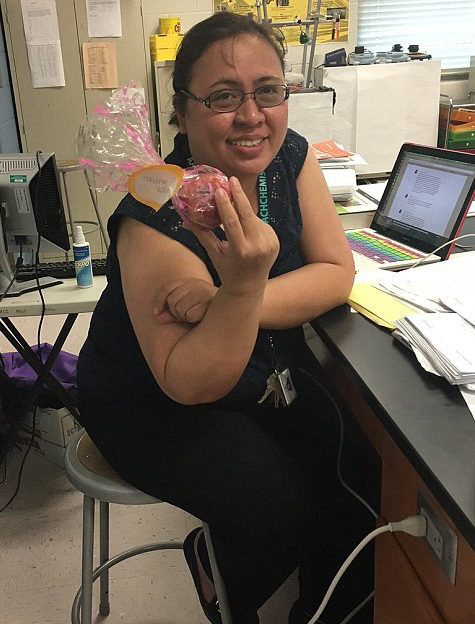 Gladys Tordil, a chemistry teacher at Parkdale High School, in Beltsville, Md., was shot and killed last Thursday while sitting in her car waiting to pick her daughters up from school. She died during a two-day shooting spree that left three dead and three more injured, according to multiple news reports.

The suspected gunman is Tordil’s estranged husband, Eulalio Tordil, who she had recently gotten a protective order against. He is now in police custody following a days-long manhunt.

While the events that led to Gladys Tordil’s murder are still being investigated, what’s clear is that Tordil was beloved by her students and fellow teachers. Over the weekend, sentiments poured in on social media through the #RIPMsTordil hashtag, and students paid tribute to her by creating banners and covering her classroom door with sticky notes.

“Gladys Tordil was a kind and loving educator who had a passion for teaching and learning,” says Neville Adams, an English teacher at Parkdale High School. “She truly believed that all children can be successful with hard work and dedication and expected no less than one hundred percent.”

Natalia Calix, who took Tordil’s honors chemistry class in 2014, tells C&EN that Tordil was a tough teacher who never gave up on her students. “Chemistry was a hard subject for me, and she tried her best to help me understand it,” Calix says. After school, Tordil would meet regularly with Calix to help her understand the material. In class, Tordil would make chemistry fun by, for example, singing songs about the periodic table and using flashcards.

“I remember my graduation day, I walked up to her and told her, ‘Thank you so much.’ She hugged me and told me, ‘I am proud of you, you passed my class, you are here graduating.’ I replied, ‘If it wasn’t for you being hard on me, I wouldn’t have made it.’ I will always be grateful for what she did for me.”

Calix will be attending Prince George’s Community College in the fall, and she plans on majoring in biology, a decision she made because of Tordil’s encouragement for her to study science.

“She was tough with school, but she was a genuine teacher, person, and mother,” Calix adds. “She was funny and cheerful. Who would have known that she was going through so much? She was my push and inspiration to pass her class, and now I love chemistry because of her.”

Tordil was a member of ACS’s American Association of Chemistry Teachers. Tordil leaves behind two high-school-age daughters. A Go Fund Me page has been set up to help with their college tuition costs.

People
Gerald A. Thomas
Careers
Thank You, Linda Wang
Education
‘Breaking Bad’: For The Excitement
Share X
To send an e-mail to multiple recipients, separate e-mail addresses with a comma, semicolon, or both.
Title: Maryland shooting victim was a beloved chemistry teacher
Author: Linda Wang
Chemical & Engineering News will not share your email address with any other person or company.