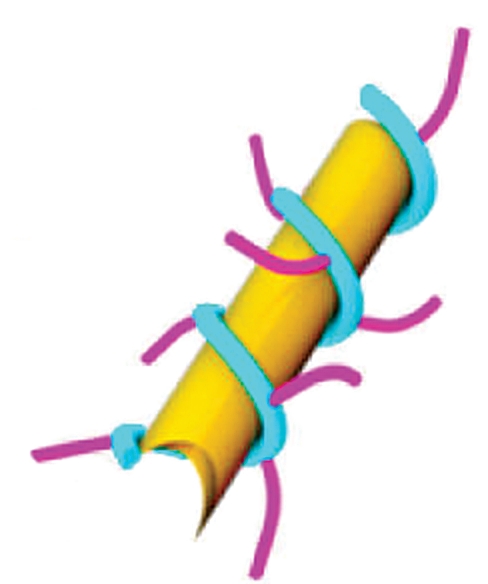 The promise of short interfering RNA (siRNA) is that it can be harnessed to turn off harmful genes in the cell. The difficulty is getting siRNA into the cell in the first place. In a new approach, nanoengineers have driven siRNA into the cell on acoustically-propelled nanomotors, silencing genes faster and more completely than with current methods (ACS Nano 2016, DOI: 10.1021/acsnano.6b01415).

To silence a gene, researchers tap the cell’s own gene suppression system, which quashes the RNA messengers that are produced when a DNA sequence is expressed. The messengers are knocked out by siRNA, complementary to a given messenger RNA, which binds the mRNA and prevents it from being translated into a protein. Scientists can mooch off the cell’s gene suppression infrastructure simply by inserting an engineered siRNA specific to a target into the cell.

But that’s easier said than done. The negatively charged siRNA has to cross a negatively-charged cell membrane, traverse the intracellular milieu, and bump into the cell’s silencing complex before degradation enzymes destroy it.

The delivery challenge has spawned a bounty of possible siRNA carriers: metal particles, lipid bubbles, hydrogels, and more. Most of these strategies rely on some form of chemical camouflage to enter the cell and on diffusion to do the rest. But Yi Chen and Joseph Wang of the University of California, San Diego, thought that ultrasound-propelled nanowires might produce an siRNA transporter with more oomph.

When bombarded with ultrasound, these tiny gold rods—about 4 μm long, 200 nm in diameter, and concave at one end—scurry into motion. They penetrate cells, bounce around like pinballs, and even spin.

To test the particles’ gene silencing ability, Wang and Chen loaded their nanorods with siRNA designed to silence green fluorescent protein. They linked the RNA sequences like branches onto a strand of DNA, and coiled the strands of DNA around gold nanorods, leaving the siRNA tendrils sticking out. Then they placed the loaded nanorods into a culture of embryonic kidney cells expressing the green fluorescent protein and exposed the mixture to ultrasound for five minutes. Within minutes the glowing green kidney cells began blinking out, and after three hours’ incubation, about 60% of the cells had gone dark. Another siRNA carrier, a lipid bubble, took at least three times longer to achieve the same results. With longer incubation times and more nanorods, the ultrasound-propelled nanomotors could silence almost all of the cells (94%). Without ultrasound, the sluggish siRNA-loaded nanorods silenced less than 20% of cells. Nanorod delivery and ultrasound treatment did not appear to affect cell survival.

Wang and Chen see potential for this siRNA delivery approach in cancer therapy and many other diseases. Nanomotors propelled by ultrasound can penetrate hard-to-reach tissue—like deep in the brain—that other carriers couldn’t, they say. They are working on controlling motor direction with magnets.

These are early experiments, and whether the nanomotors work inside animals and humans is still an open question, says Daniel G. Anderson at Massachusetts Institute of Technology. But Chen and Wang have done “a nice job of thinking about how to creatively deliver RNA using physical forces.” And medical applications may not be that far away, he adds, “where you might take cells out of a patient, treat them, and put them back in.”

Comments
Raul E. Soria.MD.FACS (May 15, 2016 3:08 PM)
dear fellows. Congratulations. Thes work will be aplicable in many patients exposed to long periods of ultrasound radiation and have passed away wih cancer of thyroid cancer. Iwish you all the best. Dr. Raul Soria. MD. FACS
Reply »