Toxic chemicals from fracking wastewater spills can persist for years

North Dakota fracking boom leaves residues of radium, selenium, lead, and other contaminants in the environment 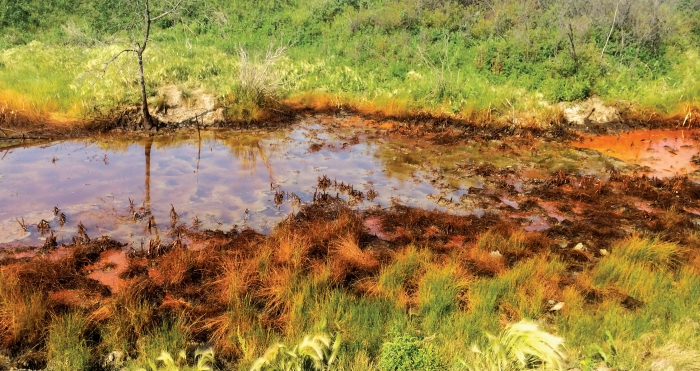 Credit: Avner Vengosh
Toxic chemicals from fracking wastewater spills can persist in the environment for years at sites such as this one near Bear Den Bay, North Dakota.

In North Dakota’s Bakken region, the fracking boom has generated nearly 10,000 wells for unconventional oil and gas production—and along with them, almost 4,000 reported wastewater spills resulting from the activity. A new study shows that these spills have left surface waters in the area carrying radium, selenium, thallium, lead, and other toxic chemicals that can persist for years at unsafe levels (Environ. Sci. Technol. 2016, DOI: 10.1021/acs.est.5b06349). Soils and sediments at spill sites also harbored long-lasting radium contamination, the study found.

In hydraulic fracturing, operators inject fluid into shale formations to release natural gas and oil. During production, the well brings up a brine that carries the fingerprint of the rock formation below, including naturally occurring toxic or radioactive elements like selenium and radium. This wastewater, called produced water, may be reused, injected underground for disposal, or processed—though not always successfully—in water treatment plants. But as fracking has increased in the Bakken region, so has the incidence of wastewater spills, often resulting from leaks in pipelines that transport the brine to injection wells.

To trace the impact of these spills on the environment, Avner Vengosh of Duke University and his colleagues analyzed four samples of produced water from shale gas wells in North Dakota, and chemical data on produced water from the U.S. Geological Survey. They also took water, sediment, and soil samples at sites of reported brine spills—including the two largest spills in the state’s history—which had occurred months to years earlier. In the largest of these, the Blacktail Creek spill of 2015, an underground pipeline leak introduced almost 11 million L of brine near the creek, which flows into a tributary of the Missouri River.

The team used several geochemical tracers, including strontium isotopes, to detect wastewater residue at the spill sites. The ratio of 87Sr to 86Sr in fracking wastewater carries a distinctive signature of the rock formation where it was produced. By measuring strontium isotopes in the produced water and in water samples taken from spill sites, the researchers could identify brine residue from a spill. Other tracers present in both types of samples confirmed the link.

In the water samples from spill sites, the team found that high concentrations of salts, trace metals, and other toxic contaminants persisted from the spills. Selenium, thallium, and radium exceeded maximum contaminant levels for drinking water in some samples. Additionally, ammonium and selenium concentrations were above recommended levels for aquatic life. In soil and sediment samples downstream from the Blacktail Creek spill site, radium concentrations were up to 100 times as great as in samples upstream.

Brian W. Stewart, a geochemist at the University of Pittsburgh who studies fracking wastewater, says this is the first time to his knowledge that systematic sampling has been done downstream of known brine spills to detect the impact of wastewater from fracking. “I was surprised that it persists that long,” he says; in two cases, the group found elevated levels of contaminants from a spill four years later.

In a separate study, Vengosh and colleagues showed that a radioactive tracer technique could accurately date recent spills, including the one at Blacktail Creek. The method relies on measuring the ratio of 228Th to 228Ra in the soil and sediment. 228Ra, which is soluble in water, comes to the surface with spills and is absorbed by soil, and then decays into insoluble 228Th with a half-life of about six years. The technique can date spills up to 10 years old (Environ. Sci. Technol. Lett. 2016, DOI: 10.1021/acs.estlett.6b00118). It could finger recent pollution from fracking wastewater in regions with a history of conventional oil and gas production, such as the Marcellus Shale region, potentially resolving issues in which producers claim that contamination resulted from earlier production, Vengosh says.

Comments
Herbert Skovronek, Ph. D. (May 25, 2016 6:46 PM)
I agree that spills and other forms of SIGNIFICANT discharge from fracking are inexcusable. But that doesn't mean fracking needs to be stopped. It needs to be managed and made safer. This reminds me of the old wildcat oil drilling approach. We don't do things that way anymore.

I asked myself if there are any natural situations that mimic those of fracking wastes. Natural sources might include geothermal wells, geysers, artesian wells. I'm sure there are others. My question is do we know if such sources also contain similar levels of contaminants and, if so, what are we doing to manage those?
Reply »

Paul Howard (June 2, 2016 1:59 PM)
I am very disappointed with the headline and lack of understanding of May 20th C&E news article “Toxic chemicals from fracking wastewater spills can persist for years”. The academic researchers at Duke University and the University of Pittsburgh working on the persistence of salts and chemical elements at spill sites are to be lauded for their efforts. This article creates a perception that these spill effects are specifically an outcome of hydraulic fracturing and neglects information to understand the reality of the issue.
All oil and gas wells produce water along with hydrocarbons. The oil and gas companies are commonly known to produce more water than oil or gas. The water that is produced has typically been in equilibrium with the geologic environment for long periods prior to the oil or gas well being drilled. This water contains minerals and salts from the reservoir rock, and the equilibrium will change with temperature and pressure change during production (reservoir conditions to ambient conditions). It is well known that some of the minerals in the water are normally occurring radioactive materials (NORM’s) with multiyear half lives. The article sensationalizes these naturally occurring chemical elements: “North Dakota fracking boom leaves residues of radium, selenium, lead, and other contaminants in the environment”.
The article confuses fracturing flowback water and long term produced water from oil and gas wells. After a hydraulically fractured well is completed, a fraction of the fracturing fluid water flows back out of the well for several days to a week. This is typically captured in tanks and transported away from the well site for state approved disposal or cleaning. The chemistry of this water is typically very similar to the chemistry of the fracturing fluid pumped into the well, and does not contain concentrations of the elements mentioned in the article. As the well is put on production at longer times, produced water is separated from the oil and gas and captured in tanks or piped away for disposal. This produced water contains the measurable quantities of the salts and elements discussed in the article. Flowback water from hydraulic fracturing and the long term produced water do not typically have the same chemical composition. When the article mentions a leak from a pipeline “Blacktail creek spill of 2015”, it is not clear whether any of the water spilled is related to hydraulic fracturing at all. Based on the elements present, I would expect not.
Surface spills of water from wells during drilling, completion, and production are an environmental problem. My understanding is that these spills have to be reported to the state authorities when they occur, and the liability to clean them up resides with the company responsible. In many cases this is the lease holding oil company (operator). I know that dams and protection barriers are used at the well site during drilling and completion operations to prevent spills occurring and to contain them. During the multiyear production of the well, spills of the produced water will contain elements from the reservoir rock. These spills are unintended and similar to any spill from an industrial process or plant.
Water production from producing oil and gas wells contains these types of elements everywhere in the world, whether there is hydraulic fracturing or not. The salts and chemical elements mentioned in the article are part of the naturally occurring environment, although less readily present on the surface. They were not introduced by the fracturing fluid chemicals or the process.
The article is in error by connecting this issue specifically to hydraulic fracturing in the title. The only correlation is that the studies were done on the spill sites in the North Dakota Bakken formation. Hydraulic fracturing is required to economically produce oil from the Bakken shale reservoir. Statements from the article like “Brian W. Stewart, a geochemist at the University of Pittsburgh who studies fracking wastewater, says this is the first time to his knowledge that systematic sampling has been done downstream of known brine spills to detect the impact of wastewater from fracking” indicate a causation from hydraulic fracturing. There is no information in the article that links these spills of produced oil well water to hydraulic fracturing. The article implies the term “fracking wastewater” with no actual information to show a connection.
I would suggest that the ACS sponsor a joint meeting or better an ongoing committee with the Society of Petroleum Engineers. The Research and Development section of the SPE would be a good point of contact. This would pool two distinct fields of information to lead an informed dialogue and solutions.
Paul R. Howard, PhD. Member ACS and SPE.
Reply »

Stan Hutchings (August 1, 2016 1:19 PM)
IMO, the resources used for fracking (manpower, money, equipment, etc.) would be better used to develop renewable, non-polluting sources of energy, such as solar, wind, hydro, etc. Fracking is a double whammy to the environment: damaging the ecosystem and producing fossil fuels to be combusted, with production of CO2. In addition, the health of our citizens may be adversely impacted by fracking byproducts. The readers of C&EN who perceive global warming caused by burning fossil fuels as a threat should be actively trying to keep fossil fuels in the ground while encouraging the development of non-polluting energy.
Reply »