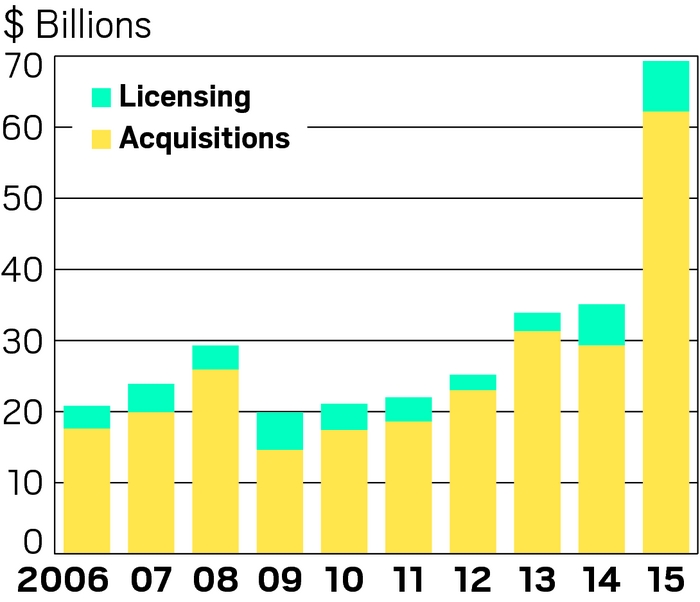 That small firms are too big to ignore is clear from a recent Biotechnology Innovation Organization (BIO) report. Emerging therapeutics companies make up more than 90% of the biopharmaceutical industry and their development programs account for more than two-thirds of the entire drug pipeline.

In order for these firms to advance their programs, however, access to capital through venture investors, stock offerings, alliances, and acquisitions is critical. To understand whether small companies are succeeding at this, BIO analyzed six major industry databases and found that the trend over the past decade has been largely positive.

Between 2006 and 2015, venture capital investment and stock offerings brought a total of $98 billion to small U.S. companies. But that amount is dwarfed by the $300 billion that came from global licensing deals and acquisitions during the same period. BIO looked only at the up-front licensing fees paid and did not include potential milestone payments that are part of 66% of the deals.

In 2015, acquisitions of emerging firms, two-thirds of which were in the U.S., reached a 10-year peak at $62.2 billion compared with the low point of $14.6 billion in post-recession 2009. Although the number of deals in 2015 remained near the decade-long average of 43, the average price paid was more than double what it had been in the previous three years.

At the same time, licensing agreements jumped by about 10% to number 144 in 2015. These alliances brought in just $7.1 billion, but nevertheless represented a 10-year high and exceeded the $6.9 billion from venture capitalists. All told, 38% of emerging company clinical programs were partnered.

Whereas recent acquisition activity targeted companies with Phase III and market-stage assets, licensing activities looked toward the upstream end of development. More than half of the emerging company pipeline is in Phase II trials and 38% of it is oncology drugs.

Not surprisingly then, at 29%, oncology took the bulk of all licensing and acquisitions dollars over the 10 years. But licensing was more popular, accounting for three times the money and 10 times the number of deals. This trend “may be pointing to a strategic move to partner rather than buy entire immuno-oncology pipelines, perhaps due to the sheer breadth of opportunities and possible combo trials, making it easier to diversify interests,” BIO concluded.

Mergers & Acquisitions
The return of the megamerger
Finance
Pharma start-ups got record funding in 2018
Business
Emerging drug firms reap investments
Share X
To send an e-mail to multiple recipients, separate e-mail addresses with a comma, semicolon, or both.
Title: Emerging drug firms reap investments
Author: Ann M. Thayer
Chemical & Engineering News will not share your email address with any other person or company.