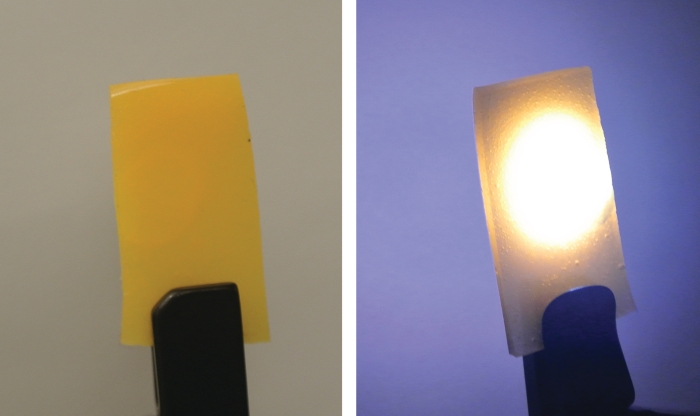 Light-emitting diodes (LEDs) are increasingly used to illuminate homes and offices; soon, the same lights could also transmit data to your computer or smartphone in photon pulses so fast the eye can’t see them. But this form of visible light communication faces two key challenges: The light must flicker fast enough to carry sizeable amounts of data; and at the same time it should provide the warm, balanced color tones needed for pleasant ambient lighting.

Nanocrystals of cesium lead bromide (CsPbBr3) could help to solve both problems, according to a team led by Boon S. Ooi and Osman M. Bakr at King Abdullah University of Science & Technology (KAUST). They have found that LEDs coated with the material can reach high data transmission rates of 2 gigabits per second, comparable to the fastest Wi-Fi, while producing a quality of light that matches commercial white-light LEDs (ACS Photonics 2016, DOI: 10.1021/acsphotonics.6b00187).

Visible light communication, sometimes called Li-Fi, is already finding real-world applications. Last year, for example, Dutch company Phillips installed a smart LED system in a French supermarket that uses Li-Fi to transmit discount offers to shoppers’ cellphones, based on their location in the store. If data rates could be increased significantly, Li-Fi might add much-needed capacity to congested Wi-Fi networks that rely on radio waves.

And since the smart LEDs are doing double duty, by providing both lighting and communication, they offer an economical solution, says Bakr. Ooi adds that these systems do not even need a direct line of sight between LED and computer: “As long as your device can see light, you can detect a signal,” he says.

White-light LEDs typically contain a blue LED coated with phosphors that turn some of the light into green and red. But most phosphors take too long to recover between excitation and emission, pulsing no more than a few million times per second. Last year, other researchers showed that polymer semiconductors could reach more than 200 MHz (ACS Photonics 2015, DOI: 10.1021/ph500451y).

The KAUST team instead turned to CsPbBr3, part of a family of materials known as perovskites that have become the darling of the photovoltaic research community. Perovskite solar cells have seen remarkable efficiency gains over the past seven years, and the materials are cheap and relatively easy to prepare in solution.

The team created nanocrystals of the perovskite, roughly 8 nm across, and found that their green emission faded in just seven nanoseconds. This allowed them to pulse reliably at almost 500 MHz, setting what the researchers believe is a new record for LED phosphors. “It is an extremely impressive and important achievement,” says Ted Sargent of the University of Toronto, who works on optoelectronic materials and has collaborated with the KAUST group in the past.

The rapid response is partly due to the size of the crystals, Bakr explains. When blue light excites an electron in the material, it forms an electron-hole pair called an exciton. The confines of the tiny crystal change the exciton’s energy levels, making the electron more likely to recombine with its hole and emit a photon.

When the researchers teamed the perovskite phosphor with a commercial red-emitting phosphor and a blue gallium nitride LED, the device produced a warm white light with a color rendering index of 89, as good as white LEDs already on the market (natural sunlight itself is rated at 100). “This quality makes this material ideal for low-power indoor illumination,” Sargent says.

Jakoah Brgoch of the University of Houston, who develops novel phosphors for LED lighting, says that it is relatively easy to fine-tune the chemistry of perovskites by substituting different halides or metal ions. “That means there’s a lot of potential to improve these properties,” he says.