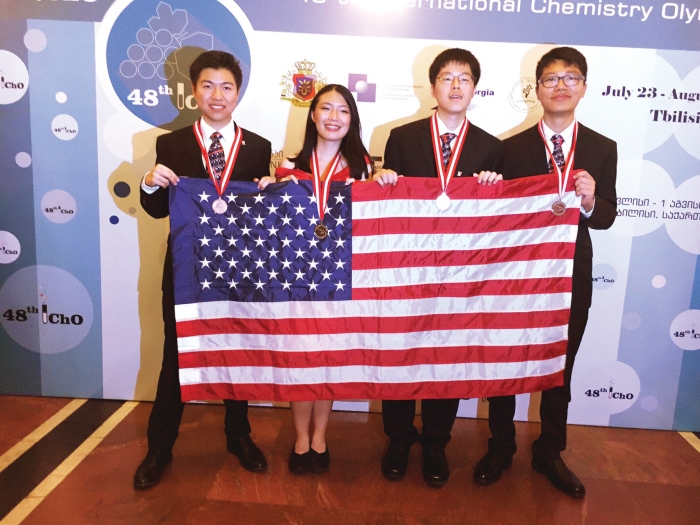 China emerged as the top performing team at the 48th International Chemistry Olympiad, with each of its four team members scoring a gold medal. The top scoring gold medal went to a high school student on the Romanian team, which earned a total of three golds and a silver.

In all, 30 gold, 57 silvers, and 83 bronze medals were awarded during the annual high school chemistry competition, which was held from July 23 to Aug. 1 in Tbilisi, Georgia. Sixty-seven countries participated this year, with each country sending up to four students.

The U.S. team, which is sponsored by the American Chemical Society, earned one gold, two silvers, and a bronze medal. “I’m very proud of the overall performance of the team, and we enjoyed the experience of being here in Georgia,” says head mentor Kelli Slunt, a chemistry professor at the University of Mary Washington. “The students were excellent ambassadors for the United States.”

“I was really nervous throughout the closing ceremony,” says Alex Liu, a rising junior at the Village School, in Houston, who won the team’s gold medal. “When I heard my name being called, it was a combination of excitement and relief at the same time.”

The competition consisted of a five-hour theoretical exam plus a five-hour practical laboratory exam. Some of the questions related to chemistry in Georgia, for example analyzing samples of the country’s famous mineral water.

“We actually tasted the mineral water after the exam,” says bronze medalist Zilu Pan, who just graduated from Canyon Crest Academy, in San Diego, and is attending Massachusetts Institute of Technology in the fall. “It had a very interesting taste to it. I could taste the sulfur and the salts.” He and his fellow students also took an excursion to the region in Georgia where the mineral water is produced.

Joyce Tian, a rising senior at Thomas Jefferson High School for Science & Technology in Alexandria, Va., who won a silver medal, says she’s proud of how she was able to handle intense pressure and have fun at the same time.

The students agreed that the experience was more than about winning a medal. “Meeting all these students from other countries, sharing experiences, and talking about the future, it’s really a once-in-a-lifetime experience,” says Kevin Tang, a rising senior at Solon High School, in Ohio, who brought home a silver medal.

The 49th International Chemistry Olympiad will take place in Thailand on July 6–15, 2017.

Salami Lukman Abayomi (August 2, 2016 9:31 AM)
I really enjoyed reading latest happenings in chemistry .Thank you for this opportunity.
Reply »

Robert Buntrock (August 5, 2016 10:27 AM)
The headline in the C&EN Newsletter said the performance of the rest of the countries represented would be shown. Not so, just the US Olympians. Please provide.
Reply »