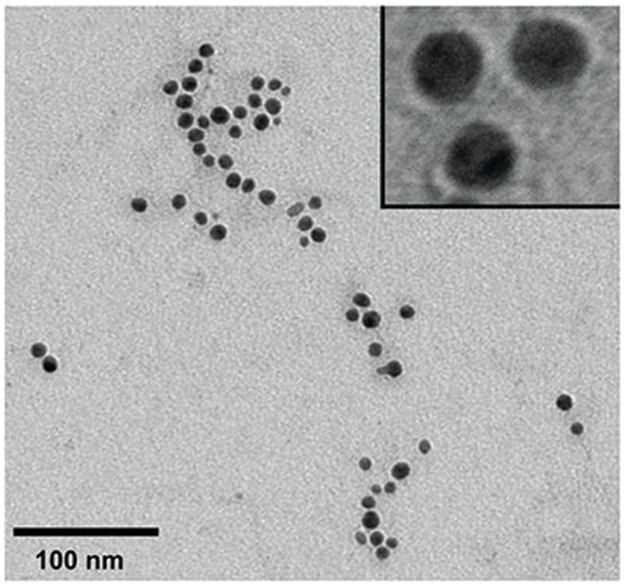 Iron is essential to microbial life, but it can be scarce in many environments. So bacteria gather this nutrient and stash it away within intracellular compartments they can draw from when external sources dry up. Now, scientists have repurposed a recently discovered iron-storing compartment in bacteria, engineering the microbes to store silver instead of iron in order to produce silver nanoparticles for industrial uses (ACS Synth. Biol. 2016, DOI: 10.1021/acssynbio.6b00117).

Silver nanoparticles—commonly used in antimicrobial coatings for bandages, clothing, and other products—are usually manufactured at industrial scales in processes that employ high temperatures or large amounts of chemical reagents. With engineered bacteria, these nanoparticles could be mass-produced by fermenting microbes in ways similar to those used to make vitamins, antibiotics, or beer.

To make these minuscule metal globs, Pamela A. Silver and Tobias W. Giessen of Harvard University turned to a 20-sided capsulelike structure in bacteria known as encapsulin, which holds iron-storing proteins that pack the capsule full of iron. The researchers removed the gene that encodes encapsulin’s iron-storing protein from Thermotoga maritima bacteria and replaced it with the sequence for a short protein that precipitates elemental silver instead. Then they transferred the entire genetic piece into an easy-to-grow laboratory strain of Escherichia coli. As a result, these structures in the engineered E. coli stuffed themselves with silver from their growth medium, forming symmetrical nanoparticles about 13 to 15 nm in diameter. The team broke open the cells to isolate and purify the nanoparticles.

When tested against five laboratory strains of bacteria, including common pathogens such as Salmonella typhimurium, the bacterial nanoparticles had twice the antimicrobial activity as commercially available silver nanoparticles or silver salts. This surprisingly strong antimicrobial activity could be because the microbe-made particles tend to be more uniformly sized than commercial mixes, says David F. Savage of the University of California, Berkeley, who was not involved with the study. The new study “is a really nice use of this new class of compartments,” he adds. “This is one of the first real applications of using them for something like this.”

In the past, researchers have made similar metallic nanostructures by engineering virus particles or another iron-storing protein known as ferritin, which result in particles about 21 to 50 nm or 5 to 8 nm in diameter, respectively. But it wasn’t previously possible to make silver nanoparticles in the 13 to 15 nm range formed by encapsulins, Geissen says, and this size range is essential for antimicrobial activity. In future work, encapsulins could be engineered to make other kinds of similarly sized metal particles with catalytic, magnetic, or other properties.

Scaling this process up could offer an alternative, greener route to making silver nanoparticles under mild conditions that results in less chemical waste to dispose. But the cells may need to be further engineered to produce more encapsulins per cell, increasing the nanoparticle yield, according to Martin J. Warren of the University of Kent.

Nonetheless, the advantages of turning to microbes for large-scale manufacture may have “less to do with efficiency and more to do with needing less toxic chemicals,” says Todd O. Yeates of the University of California, Los Angeles.

Comments
John (July 6, 2016 10:05 PM)
Didn't Michael Crichton write about this in one of his books? Please do not use E. coli for these experiments as it is an extremely dangerous germ.
Reply »

sheila king (July 7, 2016 7:45 AM)
This is a great article to share with my sophomores in high school as they start their Chemistry course, having just completed Biology last year. It illustrates the increasing importance of connections between the disciplines, including environmental science.
Reply »