An evolved enzyme builds β-branched tryptophan analogs in one step 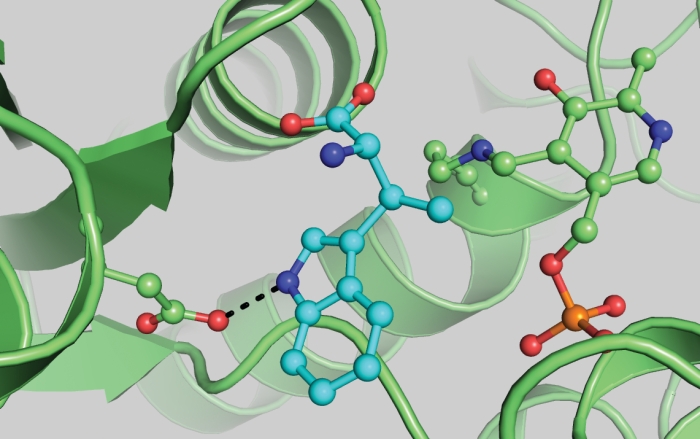 Dressing up common amino acids by adding chemical groups creates unusual amino acids that can have novel catalytic, medicinal, and other properties. But adding a methyl group to the amino acid tryptophan’s β carbon is so thorny that it’s rarely done. Now, bioengineers have used directed evolution to produce an enzyme that catalyzes the synthesis of β-methyltryptophan analogs in just one step (J. Am. Chem. Soc. 2016, DOI: 10.1021/jacs.6b04836).

[+]Enlarge
An engineered subunit of tryptophan synthase catalyzes the creation of β-methyltryptophan (right) from indole (left) and threonine (center) in one step.

An engineered subunit of tryptophan synthase catalyzes the creation of β-methyltryptophan (right) from indole (left) and threonine (center) in one step.

Many modified tryptophans can be purchased from a chemical supplier, says Andrew R. Buller of California Institute of Technology, “but you can’t get β-branched tryptophans.” β-Methyltryptophan is a precursor to antitumor agent streptonigrin and other natural products. And exploring other β-branched tryptophans could lead to new bioactive molecules. But synthesizing β-methyltryptophan is tricky. Tacking a methyl group onto tryptophan’s β carbon requires adding protecting groups to every reactive arm of the amino acid. That makes the process “steppy and inefficient,” Buller says. Added to that is a need to consider stereoselectivity.

Enzymes are generally better at such schemes. Yet nature’s regular route to β-methyltryptophans, discovered a few years ago, involves three enzymes and an expensive cofactor (Angew. Chem. Int. Ed. 2013, DOI: 10.1002/anie.201306255). So when Buller, Frances H. Arnold, and coworkers at Caltech discovered that a subunit of the enzyme tryptophan synthase could make β-methyltryptophan from indole and the amino acid threonine, they were very pleasantly surprised. Tryptophan synthase normally builds tryptophan from indole and the amino acid serine, so it was surprising that the enzyme would use threonine at all. Its activity was weak, but Arnold’s group specializes in improving enzymes through directed evolution.

The tryptophan synthase they used came from the archaea Pyrococcus furiosus, which grows in ocean hydrothermal vents. The organism thrives in boiling water, and mutated proteins from the organism tend to be stable. The researchers had previously used directed evolution to make the subunit catalyze tryptophan synthesis independent of its partner protein, so they performed another round of random mutations, looked for mutant proteins with increased production of β-methyltryptophan, and then recombined genes coding for the most active variants. They ended up with an enzyme that had eight mutations and was 1,000 times as active in choosing threonine to make β-methyltryptophan as the natural tryptophan synthase subunit.

“This is a major advance in the synthesis of β-methyltryptophans,” says Robert Phillips of the University of Georgia. It demonstrates “the power of mutagenesis and high-throughput screening in engineering of biocatalysts.”

Shuangjun Lin of Shanghai Jiao Tong University, who discovered the natural three-enzyme route for synthesis, notes that this reaction not only works in one step with inexpensive starting materials, it produces an enantiopure product, unlike nature’s route. He wonders if the enzyme would work with threonine analogs and yield an even greater variety of β-branched tryptophans.

The researchers haven’t published any work on threonine analogs yet, but they did substitute indole variants for indole. The enzyme accepted many of them, and built a whole family of β-branched tryptophan kinfolk, including ones with new carbon-sulfur and carbon-nitrogen bonds.

Comments
ana m. lobo (July 29, 2016 5:26 AM)
Well done! A very important discovery with plenty of applications showing the need to couple the practice of chemistry with that of biology... or the importance of diversity of backgrounds in human scientific teams.
Reply »