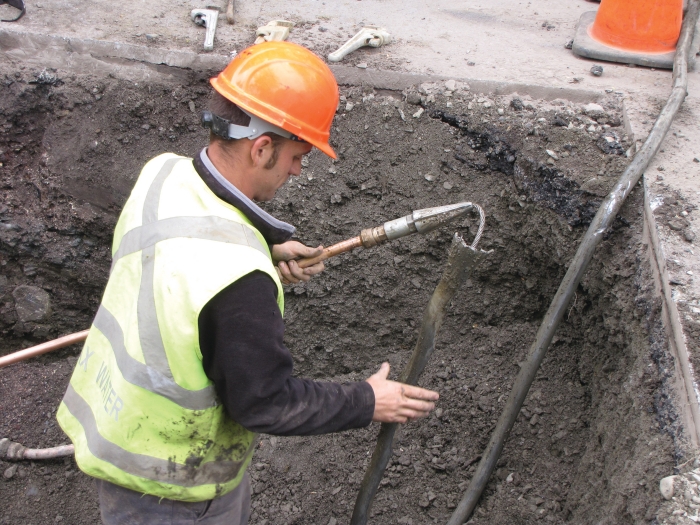 Getting rid of lead pipes in drinking water systems seems like a logical way to combat concerns over lead in household water. But in some cases doing something may be worse than doing nothing at all. A study including 61 Canadian homes where only portions of lead pipes were replaced found that lead levels in the water more than doubled immediately following this change (Environ. Sci. Technol. 2016, DOI: 10.1021/acs.est.6b01912). Lead levels remained elevated for six months, indicating that partial replacement does not reduce household lead exposure, the researchers say.

Once commonly used in North America, lead water pipes were banned in the United States and Canada in the mid-1970s and 1980s. Today, an estimated 7% of people in the U.S. have at least some lead pipe in the system that carries water from the main distribution line to where it enters the house. Water lead levels correlate with lead in residents’ blood and are linked to learning difficulties, slowed growth, and other health and behavioral problems in young children.

To reduce lead exposure, municipal water utilities replace the lead pipe with copper pipe, but in many places they are only allowed to carry out a partial replacement, removing the lead pipe between the main water line and a homeowner’s property boundary. After such a partial service line replacement, new copper pipe connects to lead pipe that crosses the property to where it enters the house.

Partial replacement may not be good for public health, says Graham A. Gagnon of Dalhousie University, because connecting copper pipes to lead ones can prompt electrochemical reactions that release lead ions into the water flowing through them. To study this question, he and colleagues partnered with the water utility in Halifax, Nova Scotia, as the utility replaced service line around the city between 2011 and 2015. The team measured lead levels coming out of the households’ taps before and after the replacement.

More than 100 homeowners undergoing a partial or full lead service line replacement in Halifax collected several 1 L samples of water in the days leading up to and following the replacement and at one, three, and six months after replacement. The researchers analyzed the samples for lead, copper, aluminum, and iron using inductively coupled plasma mass spectrometry.

In homes with partial line replacement, lead levels more than doubled in the first two water samples collected immediately after replacement. Six months after the partial replacements, water samples from 27% of these homes had lead levels that exceeded the U.S. Environmental Protection Agency’s action level (15 μg/L). Before replacement only 13% of those homes topped that threshold.

In homes with full service line replacement, lead levels in every liter of drinking water significantly decreased within a month after replacement. However, lead levels in these homes did not drop to zero, and a few samples still exceeded the threshold. This could be because lead tends to deposit in old galvanized iron plumbing and accumulate in faucet aerators, Gagnon says.

“This is probably the most extensive field data set yet collected that shows half-replacements are not beneficial, and are in fact harmful,” says Marc A. Edwards, at Virginia Tech, who was not involved in the current study. His research team investigated high lead levels in drinking water in Flint, Michigan in 2015. The results confirm field work done in the 1970s and recent laboratory experiments from his group under controlled conditions, Edwards adds.

When it comes to service line replacement, Edwards recommends doing nothing or replacing the entire pipe. If a utility is going to do a partial replacement, he encourages them to tell homeowners that lead levels in the water could potentially increase.

The U.S. Environmental Protection Agency is considering revising the rules governing lead in drinking water, and an advisory board recommended only doing full service line replacement. In Halifax, the water utility has stopped doing partial replacements and is only fully replacing lead service lines.

Sustainability
US Senate passes sustainable chemistry legislation
Environment
P2 and ADM pair up for renewable products
Recycling
Coca-Cola bottler invests in recycling
Share X
To send an e-mail to multiple recipients, separate e-mail addresses with a comma, semicolon, or both.
Title: All or nothing is a better strategy for keeping drinking water lead levels low
Author: Melissae Fellet
Chemical & Engineering News will not share your email address with any other person or company.