[+]Enlarge
Credit: Jim Bourg/Reuters/Newscom
Ammonium nitrate, a common agricultural chemical, was used in the 1995 bombing of the Murrah Federal Building in Oklahoma City. 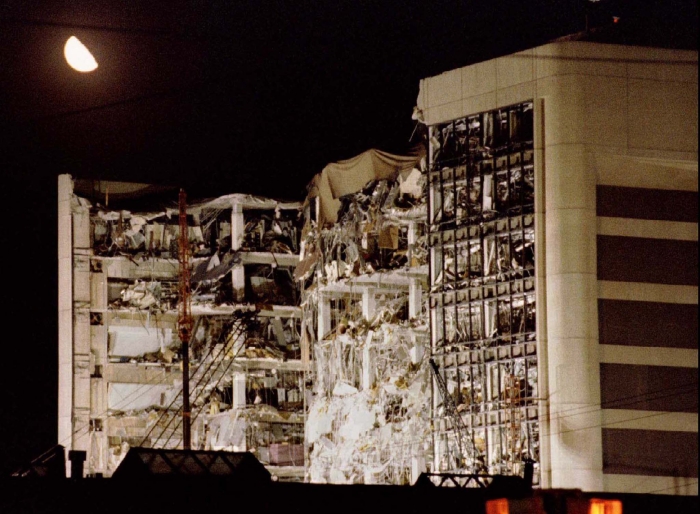 Credit: Jim Bourg/Reuters/Newscom
Ammonium nitrate, a common agricultural chemical, was used in the 1995 bombing of the Murrah Federal Building in Oklahoma City.

The Department of Homeland Security wants to keep explosive precursor chemicals, such as ammonium nitrate, out of the hands of would-be bombers without disrupting industries, such as agriculture, that rely on these substances. DHS is turning to the National Academies for help.

At the behest of DHS, a committee of the National Academies of Sciences, Engineering, & Medicine began studying this issue in late October. The panel includes chemists and engineers with expertise in explosives materials.

DHS already has a good handle on the level of threat posed in the U.S. from improvised explosive devices (IEDs), David Wulf, a Homeland Security division director, told the panel, which met in Washington, D.C. In addition, the department knows which “chemicals can be made to go boom.”

“We hope that you’ll take a critical look at the universe of IED precursor chemicals that have legitimate uses and provide recommendations so that we can have a common sense approach” for restricting access to the chemicals, Wulf said. He gave as example of this sort of approach the federal methamphetamine law. That statute led to restrictions on the sale of ephedrine, pseudoephedrine, and phenylpropanolamine, legal drugs that are used as raw materials by those cooking up the illicit drug methamphetamine.

Eight years ago, Congress required DHS to regulate the sale and transfer of ammonium nitrate, a fertilizer, “to prevent the misappropriation or use of ammonium nitrate in an act of terrorism.” The substance was used in the 1995 bombing of a federal building in Oklahoma City that killed 168 and injured hundreds of others. DHS proposed an ammonium nitrate rule in 2011, but it has yet to finalize restrictions on the chemical.

Wulf said the legislation’s narrow focus on ammonium nitrate has made it challenging for DHS to complete the rule. Such restrictions could shift would-be bombers to other explosive chemical precursors, he explained.

DHS is asking the National Academies committee to identify chemicals that have been used or are likely to be used in IEDs and analyze how these chemicals move through the supply chain. DHS wants the committee to prioritize the chemicals for control.

The committee expects to complete its report in 2017.

Comments
Larry Hutchinson (October 28, 2016 8:35 PM)
I suspect a 50:50 mix of Ammonium Nitrate and Sulphate would be a fine fertilizer but be non-explosive and difficult to separate.
Reply »

(6) “Properties of Ammonium Nitrate based fertilizers”, Ph.D. thesis by Harri Kiiski from Helsinki University, Faculty of science, Department of Chemistry, 2009

The thesis also breaks down the reaction schemes, see https://helda.helsinki.fi/bitstream/handle/10138/21085/properti.pdf?sequence=1

A figure therein, Figure 130, shows some of the energies of mixtures and quickly suggests that ammonium hydrogen sulphate would be much safer.
Reply »

Britain Bruner (November 3, 2016 7:20 AM)
There is a working paper in the Transportation of Dangerous Goods subcommittee at the UN session coming up in December. The experts there will be discussing hazard classification and percentage cutoffs for additives such as AS, and other inorganic materials.