But the discharge probably has not contaminated the marine food web 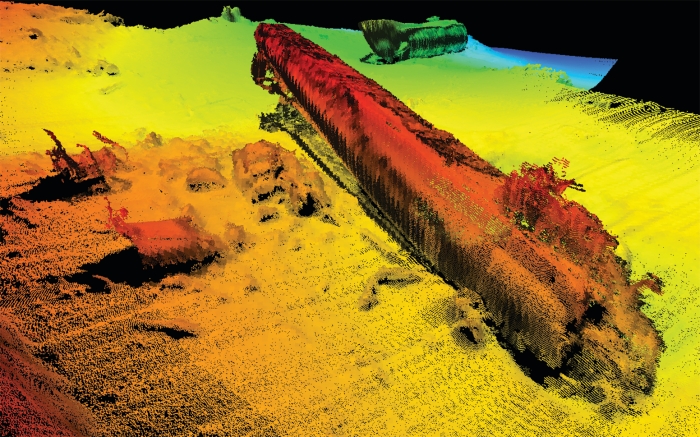 Credit: Environ. Sci. Technol.
Mercury leaking from a German submarine wrecked in WWII, shown here in a sonar image, polluted sediments off Norway but did not substantially contaminate crabs in the area. The length of the submarine is approximately 88 m.

The German submarine U-864 was sunk in World War II off the Norwegian island of Fedje, loaded with 67 tons of metallic mercury. When the wreck was discovered in 2003, some of the mercury was found leaking from broken containers. Now, researchers show that this material has contaminated sediments surrounding the wreck. But surprisingly, the scientists think the marine food web may not be substantially affected by the pollution, based on their analysis of crabs sampled near the sub (Environ. Sci. Technol. 2016, DOI: 10.1021/acs.est.6b02128).

Crabs and other seafood are often contaminated with neurotoxic mercury from industrial pollution and fossil fuel burning that is deposited from the air onto the ocean surface, making its way into the food chain. So when the mercury-laden vessel was discovered at a relatively shallow depth of 150 m, scientists, fishermen, and government officials were concerned. To determine the wreck’s impact, Norway’s Coastal Administration sampled sediments, and the National Institute of Nutrition & Seafood Research collected crabs near the site. Frank Vanhaecke of Ghent University and his colleagues then analyzed the samples with a variety of methods, including measuring mercury isotope ratios using multicollector inductively coupled plasma-mass spectrometry.

“In some sediment samples we could see small droplets of mercury,” Vanhaecke says. The wet sediments had 60 to 24,000 mg/kg of mercury—in comparison, background levels in ocean sediments are 0.02 to 0.1 mg/kg. The isotopic composition of mercury in the submarine was similar to that in the sediments. Notably, crabs collected within a four-nautical-mile radius of the wreck did not have significantly different mercury concentrations than those collected from other areas along the Norwegian coast. However, the isotopic results indicate that crabs in the immediate vicinity of the submarine did take on some mercury from the wreck in their brown meat.

The researchers hypothesize that mercury levels in crabs are not elevated because the sandy seafloor has relatively little organic matter; this may have limited methylation of mercury from the wreck by microbes. Methylmercury is the most bioavailable and toxic form of the element. Instead of methylmercury, what little mercury the crabs absorbed from the wreck was likely ingested directly from the sediments. The results show no evidence that the metal transforms into the more toxic methylmercury, Vanhaecke says. That “would make the problem much more risky,” he says, and needs to be further assessed.

Comments
George Helz (October 19, 2016 5:02 PM)
What was the purpose of all that Hg? Surely submarines weren't being used a freighters. How could a submarine even surface with a load like that?
Reply »

Deirdre Lockwood (October 22, 2016 8:25 PM)
Thanks for your comment--see my response to John King below for more details.
Reply »

David Young (November 17, 2016 1:03 AM)
The U-864 was sent on a mission to Japan primarily to deliver Me262 jet engine parts, technicians and plans so the Japanese could better engage the allies, thus drawing resources away from the fight in Europe. The shipment of mercury was of a secondary nature, and the steel ballast was removed from the keel and replaced with an equal amount in weight of mercury secured in steel cylinders. In the case of the U-864 which was a long haul ocean going type IXD2, it was being used as a freighter.
Reply »

David Mendenhall (October 19, 2016 5:05 PM)
What is the temperature at that depth? If cold enough, microbes won't grow and the mercury will just sit there forever.
Reply »

Deirdre Lockwood (October 22, 2016 8:24 PM)
According to author Frank Vanhaecke, "The estimated temperature is around 5°C. I don’t know what effect this would have on the bacteria, but also light is missing."
Reply »

Deirdre Lockwood (October 22, 2016 8:23 PM)
The mercury was intended for manufacturing explosives (Hg fulminate). According to the study authors, "The cargo also contained airplane parts. A U-boat was not a usual means of transportation of goods, but there was an efficient embargo against normal shipping activities during the end of World War II."
Reply »

Shankaran K (October 20, 2016 8:38 AM)
I wonder the depth at which this is unfolding? Mercury being heavy metal I wonder if any studies done to asses its spread and other ocean current dynamics of its movement? An estimate of cost of cleaning must be also addressed if the problem is highly localized. And, Nordic country and Germany must share the cost.
Reply »

RominElnagar (October 30, 2016 6:26 PM)
I am more worried about oceanic distribution of radiation from the disastrous meltdown of the reactors at Fukushima.
Reply »