Self-propelling motors could target cargo to the gut

Credit: ACS Nano
Micromotors that can deliver a payload to the intestines are made of gold (yellow) and poly(3,4-ethylenedioxythiophene) (green), and filled with magnesium particles.

The human intestine is a nearly 8-m-long cache of bacteria, both good and bad. When disease-carrying microbes colonize different sections of the gut, they can cause problems like inflammation and diarrhea. Researchers have now developed tiny, self-propelling, biocompatible robots that could deliver drugs or imaging agents to a targeted section of the intestine (ACS Nano 2016, DOI: 10.1021/acsnano.6b04795). When swallowed, the devices pass through the stomach, travel a preset distance, and embed themselves in the intestinal lining.

A team led by Liangfang Zhang and Joseph Wang of the University of California, San Diego, created 15-µm-long, 5-µm-wide hollow cylinders made of gold and poly(3,4-ethylenedioxythiophene). They filled the tubes with magnesium particles and a fluorescent dye as cargo and then coated them with a pH-sensitive methacrylate-based polymer. The methacrylate coating protects the tubes from the acidic gastric fluid in the stomach, but starts to dissolve in the neutral pH intestinal fluid. By tuning the coating’s thickness, the researchers can control how far the devices travel via natural gut movement before the coating dissolves completely; thicker coatings last longer.

At the target point, after the methacrylate coating has completely dissolved, the ends of the tubes open up, exposing the magnesium particles to intestinal fluid. Magnesium reacts with water to produce hydrogen bubbles that propel the tubes forward. The propulsion causes them to collide with and be trapped within the mucus layer lining the intestine.

To test the devices, the researchers fed mice suspensions of micromotors. Four groups of mice ingested either uncoated devices or devices with one of three different coating thicknesses: 0.3, 0.8, and 1.2 µm. Measuring the gold content of the animals’ digestive tracts with mass spectrometry showed that 79% of uncoated devices remained in the stomach. Most of the coated devices ended up where the researchers expected; devices with thin, medium, and thick coatings accumulated in the upper, middle, and lower sections of the small intestine, respectively.

Next, the researchers plan to load the micromotors with drugs and test how effectively the devices deliver them in mice. 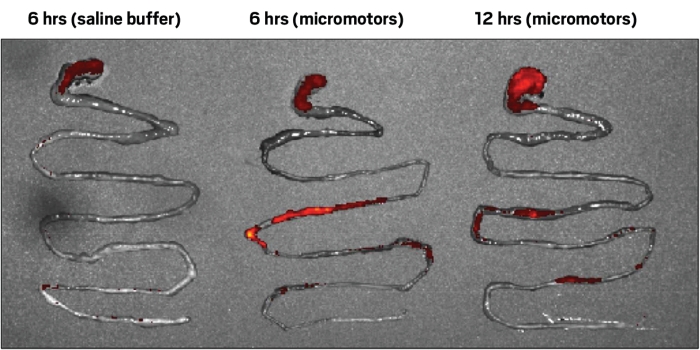 Credit: ACS Nano
Fluorescence images show the location of micromotors coated in order to target the middle section of a mouse intestine. At six (center) and 12 hours (right) after ingestion, the micromotors reach their expected position. A saline buffer solution used as a control does not show any signal in the intestinal tract (left).