Mutagenic azo dyes are the most prevalent brominated compounds in dust 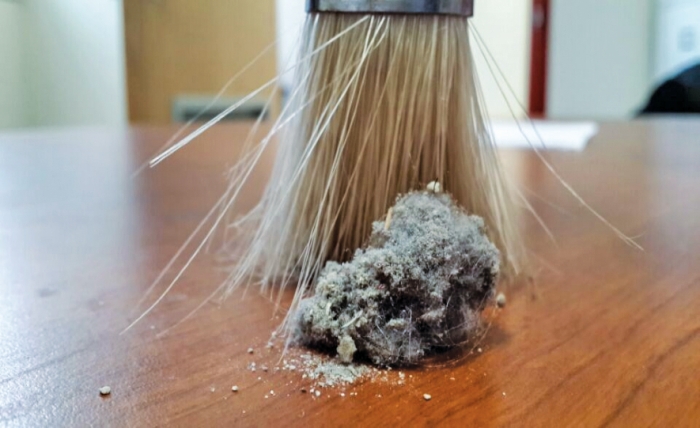 The health hazards of brominated flame retardants lurking in household dust have made the news for years because of the ease with which humans can be exposed to the endocrine-disrupting compounds. Studies have hinted there are also large concentrations of unknown and potentially harmful brominated compounds in dust, but the number of compounds remained unclear and scientists didn’t have an efficient way to identify them, says Jianxian Sun, an environmental toxicologist at the University of Saskatchewan.

Now, Sun, John P. Giesy, and colleagues show that flame retardants in dust are dwarfed by another class of brominated compounds, azo dyes, that are known mutagens and commonly used to color clothing and furniture (Environ. Sci. Technol. 2016, DOI: 10.1021/acs.est.6b03954). A novel method employed by the study can sift through the thousands of compounds in complex mixtures such as dust to identify and prioritize compounds for hazard assessment.

The team decided to take advantage of a novel screening method developed by co-author Hui Peng. Based on ultra-high resolution mass spectrometry combined with statistical analysis, the method can pluck individual brominated compounds out of a mixture and provide a chemical formula for them.

The team vacuumed up 23 dust samples from eight homes in Saskatoon, Saskatchewan, and ran them through the screening method. The researchers singled out 549 unique brominated compounds in the house dust but could find matches for only 14% of the substances in the public database Chemspider. “This study demonstrated for the first time that hundreds of novel brominated compounds exist in house dust,” Sun says. 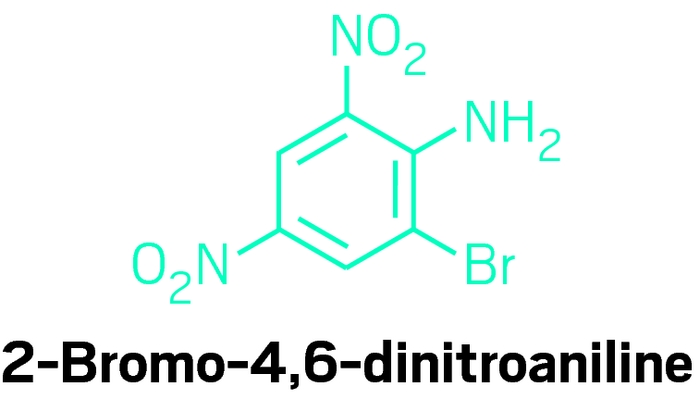 The scientists then focused on 140 of the most abundant ones. Out of those, the statistical analysis highlighted 24 as known brominated flame retardants. The analysis also uncovered a cluster of 78 unknown, nitrogen-rich brominated chemicals that accounted for about 85% of the mass of brominated compounds in the dust. Closer investigation showed that one of the more common motifs of the unknown molecules was 2-bromo-4,6-dinitroaniline (BNA), a raw material for the synthesis of brominated azo dyes. Based this finding and the compounds’ chemical formulas, Sun and her colleagues concluded that the unknown compounds were indeed these dyes.

To pinpoint a possible source of the dyes, the team snipped samples of shirts and pants, and ran extracts of the cloth through the screening method. Because the clothes contained high concentrations of BNA and other brominated dyes, and since the dust they collected also contained clothing fibers, the scientists suggest that brominated azo dyes from fabric may be the dominant source of brominated compounds in house dust.

Finally, the researchers used a standard, cell-based test to measure the mutagenic activity of house dust and pure BNA at a concentration of 1.25 µg/mL, comparable to levels of BNA in the dust. All samples showed significant mutagenicity.

Azo dyes, most of which are nonbrominated, represent 65% of the global dye market. They are relatively cheap compounds that impart bright yellow, orange, red, and blue colors to clothing, leather, toys, and plastics. Incorporating bromine in azo dyes could make the compounds more persistent and stable in the environment, Sun says. Some of the azo dyes, with and without bromine, are known to be carcinogenic or mutagenic.

“The results are surprising because few researchers have looked at brominated azo dyes and it raises questions about why they haven’t been discovered before,” says Miriam L. Diamond, an environmental chemist at the University of Toronto. Yet the findings line up with growing recognition that textiles could be an important source of humanmade contaminants, she says. The study indicates that the research focus on flame retardants likely underestimates human exposure to brominated compounds, which are of special concern owing to their health impacts and ability to persist in the environment and bioaccumulate, Diamond concludes.

Pollution
Rise in quaternary ammonium compounds observed during coronavirus crisis
Analytical Chemistry
Tracing the chemistry of household dust
Share X
To send an e-mail to multiple recipients, separate e-mail addresses with a comma, semicolon, or both.
Title: Bromine-containing dyes dwarf flame retardants in house dust
Author: Janet Pelley
Chemical & Engineering News will not share your email address with any other person or company.

Comments
Soumyajyoti Chatterjee (November 14, 2016 1:23 AM)
Are those brominted azo dyes are carcinogenic? Are are soluble in water? I am very interested to know their solubility in water/ acetonitrile.
Reply »

David Mendenhall (November 16, 2016 5:15 PM)
When an environmentalist describes concentrations as "high" it means nanomoles instead of "small", which is picomoles. Not clear whether these concentrations are significant. A study decades back of carcinogens in human solid waste found a potent carcinogen that was synthesized by gut bacteria.
Reply »

Geoffrey Lindsay (November 16, 2016 6:26 PM)
Was the concentration in micrograms of dye-precursor per mL of 'fluffy' dust as shown in the picture, or dust that is in the air (mL of air) or compacted dust?
This sounds like a dangerous level, and I hope EPA scientists check into this discovery.
Reply »

Dr. Syed Mohammad Abdul Hai (November 16, 2016 10:59 PM)
What is the trail of such brominated compounds in the house dust, as I am sure these do not occur in nature
Reply »

Clare Thorp (November 17, 2016 10:43 AM)
What is far more important here is not whether or not these compounds are present, but whether or not they are at high enough levels to cause harm. We all know about the relationship between dose and effect: acetaminophen is the classic example: it can get rid of a headache or it can kill you. Fruit and vegetables contain many naturally occurring carcinogens and that's before you even have a glass of wine with them. Cell based tests are very sensitive tests, and are often used as screening level assays to determine whether or not a chemical has the capacity to do certain things - in this case, whether or not it can trigger the necessary cellular responses that could lead to cancer. What these tests can't tell you is whether or not this can actually happen in real life situations (such as from dust) and in living beings. This requires an entirely different slew of testing - one which takes account of the fact, for example, that we don't exist as cells in a petri dish but that we are protected by our skin, our livers, our ability to metabolize chemicals so we can prevent these chemicals from entering our bodies, or remove them. If this were not the case every single one of us would get skin cancer the moment we stepped out in the sun. We would have to stop eating fruit and vegetables because they contain naturally occurring carcinogens. So before we start getting too anxious (because stress is also implicated in causing cancer!) or start asking for other dyes to be used in our clothing, our first question should be - does the fact it gets into dust actually matter? In other words, what is the risk? (risk = hazard x exposure) And our second question should be - are the alternatives any better, safer, or protect us from other risks as some of these compounds are designed to do? In other words, what is the relative risk? If we don't ask questions like these then we could end up focusing on entirely the wrong risk space and end up doing ourselves more harm than good.
Reply »

Joe Cotruvo (November 23, 2016 2:52 PM)
I agree with Claire Thorp that it is difficult to translate in vitro screening tests to whole animal cancer risks; it is too soon to get excited. Azo dyes often containing benzidine are well known bladder carcinogens from occupational exposures. Whether the bromine increases or decreases the cancer risk remains to be seen. Analytical chemists should be careful in their discussions of toxicology.
Reply »

Prakash Bhate (November 23, 2016 8:35 PM)
The manufacture of benzidine was banned in the US in 1973 and most countries followed suit soon after that. Azo dyes that are available today do not have benzidine as one of the raw materials used.
Reply »

Prakash Bhate (November 22, 2016 2:19 AM)
Dyes based on 2-bromo-4,6-dinitroaniline (BNA) are disperse dyes used for synthetic fibres (polyester/polyamde/polyacrylic). BNA is diazotized and coupled with a coupling component to give these dyes. With two nitro groups in the benznene ring, BNA is a very weak base and cannot be diazotized under the usual conditions, i.e. dil HCl and sodium nitrite at low temperature. It is diazotized by using nitrosyl sulphuric acid (NSA) which is essentially pure nitrous acid dissolved in conc sulphuric acid. BNA is dissolved in NSA and the solution is then quenched in ice whereupon the water soulble diazonium salt of BNA is formed. The reaction is almost quantitative. In a rare case when it is not, a small amount of BNA separates as an insoluble material because being a very weak base it is not soluble in the dilute sulphuric acid that is formed. The diazonium salt is then clarified to remove any insoluble impurities. The clear solution of diazotized BNA is then coupled to give the desired disperse dye. I have described this process in detail to drive home the fact that the resulting disperse dye is absolutely free from BNA. Coloured synthetic fibre is essentially a solid solution of these dyes in the fibre and hence reduction of the azo linkage by azo reductases present in skin-surface micro-flora to give back BNA is highly unlikely. Azo dyes are known to cleave at the azo linkage in a mass spectrometer and thereby exhibit a molecular ion of the parent aromatic amine used in the diazo coupling reaction. The BNA that Sun and others have detected is on account of this azo group cleavage of disperse dyes and not free BNA.
Reply »