Nanosensor reveals temperature variation in the muscles of live creatures 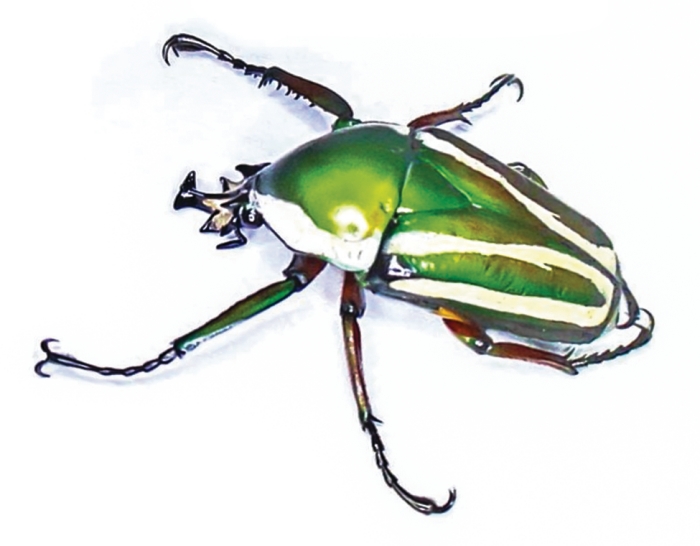 With a new nanoparticle-based thermosensor, researchers have revealed minute variation in temperature along the muscle fibers of a beetle as it prepares for flight (ACS Sens. 2016, DOI: 10.1021/acssensors.6b00320). The work is one of the first to trace the internal temperature of a live animal on the scale of micrometers.

Tracking temperature at the microscale in cells and live organisms could help researchers answer fundamental questions in physiology and developmental biology, and even design more precise cancer therapeutics. In one approach toward this goal, scientists use temperature-sensitive fluorescent probes that can be visualized under a microscope. But there are challenges in applying this method in live samples. For one thing, naturally present biomolecules, such as certain coenzymes and other proteins, can generate their own fluorescence and create background noise. Additionally, when cells or organisms move under a fluorescence microscope, the focus changes, generating more noise. 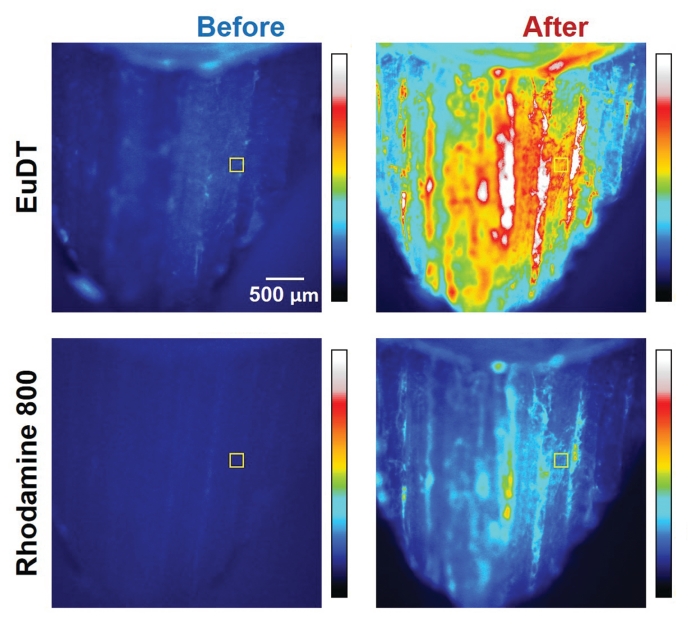 Credit: ACS Sens.
Stimulating a beetle’s muscle generates autofluorescence (left), as shown in these pseudocolored images. After spreading a nanosensor on the surface (right), the glow of the two fluorescent dyes in the sensor reveals temperature variation. Color scale shows luminescence intensity increasing from blue to red.

To circumvent these problems, Madoka Suzuki of Waseda University and his colleagues, including Hirotaka Sato of Nanyang Technological University, decided to make a probe containing two different fluorescent dyes—a highly temperature-sensitive dye called EuDT, and a less temperature-sensitive one, rhodamine 800, used as a reference. The intensity of EuDT’s glow varies with temperature between 21.5 and 44 °C, whereas the signal from rhodamine 800 doesn’t change much over that range. The system takes out the noise in two ways. The dyes emit reddish light at different wavelengths, avoiding overlap with the blue and green autofluorescence generated by cells. Then, determining temperature by looking at the ratio of the two signals eliminates noise due to movement of the sample.

To create the probe, the researchers encapsulated the two dyes in polymeric nanoparticles and verified that the ratio of their emissions showed a strong relationship with temperature. The team then tested the particles in a live animal. Previously, they and other researchers had measured temperature in nematodes and fruit fly larvae on the microscale, but these studies monitored externally induced temperature changes, like those created by shining a laser on the creatures. To see if they could monitor natural heat production by the muscles of relatively larger animals, Suzuki and his colleagues chose to study the 4-cm-long beetle Dicronorrhina derbyana.

To try and detect a heat response in the beetle, the researchers tethered it to a stick and removed the cuticle above its shoulder muscle. They spread the nanoparticle sensor over the muscle surface, then pinched one of the beetle’s hind legs with a tweezer to generate a preflight muscle response, and measured the fluorescence.

Their results show temperature variation at a much higher spatial resolution than could be detected with an infrared camera. With the nanoparticles, Suzuki says they could see that the temperature seemed to vary along a single muscle fiber.

Peter Maurer, a physicist developing nanoscale imaging techniques at Stanford University, says it is “an exceptional task” to probe temperature in a living organism on a micrometer scale, and this study takes a step in that direction. The method “can readily be implemented and is relatively robust to many leading sources of systematic errors, making it an ideal technique for many biological applications,” he says.