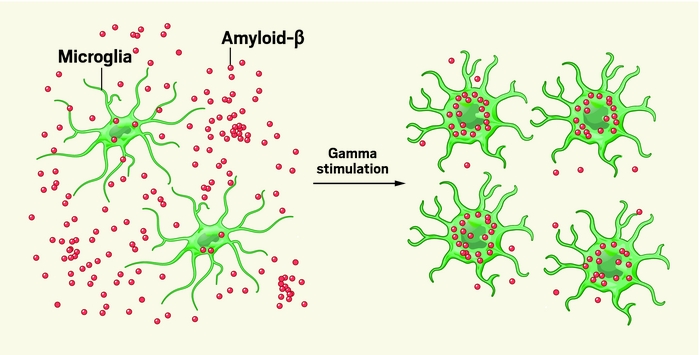 Credit: Nature
When stimulated by gamma waves, microglia take up amyloid-β from their surroundings.

Our brains can get quite rhythmical as groups of neurons fire together in oscillating patterns during different activities, such as processing sensory information or encoding memories. A study suggests that one of these rhythmical patterns called gamma waves can stimulate the brain’s immune cells to clear out amyloid-β (Aβ), the peptide that forms plaques in the brains of people with Alzheimer’s disease (Nature 2016, DOI: 10.1038/nature20587).

Researchers at Massachusetts Institute of Technology led by Li-Huei Tsai have shown that they can stimulate such brain oscillations in mice by flickering light at a specific frequency in front of the animals, and that this simple stimulation leads to reduced levels of the Alzheimer’s peptide. They think their results hint at a noninvasive therapy for the neurodegenerative disorder.

“The implications are significant,” says Michal Schwartz of the Weizmann Institute of Science, who was not involved in the work. And, she says, if the effects of gamma waves also improve cognition in Alzheimer’s models, “it’s unbelievable.”

Gamma waves—patterns of brain activity with frequencies between 30 and 90 Hz—are often disrupted in many neurological disorders including Alzheimer’s. The MIT team wanted to understand the connection between these oscillations and the disease.

Tsai and her colleagues engineered brain cells called interneurons in mice to express light-activated ion channel proteins, allowing the researchers to force the cells to fire when flashed with light from an implanted fiber-optic cable. When interneurons fire, they send signals to other cells to tell them to stop firing. Firing interneurons drive oscillating patterns of activity because they connect both with other inhibitory interneurons and with so-called excitatory neurons, which encourage other cells to fire.

“You can imagine these networks ping-ponging back and forth, which allows them to generate these gamma rhythms,” said Edward S. Boyden during a telephone press conference this week. Boyden is part of the MIT team and previously helped develop the light-activated neuron technique, also known as optogenetics.

When the researchers applied this methodology to mice engineered to overproduce Aβ, they found that gamma waves at 40 Hz could significantly reduce levels of the peptide. When the scientists studied these animals’ brains further, they found evidence that immune cells called microglia had cleared the peptide. The microglia “show very striking morphological transformation, and their gene expression profile changes, and they appear to have more amyloid in their cell bodies,” Tsai said during the press conference.

Optogenetics like the team carried out is too invasive for use as a therapy in people. So the researchers looked for a noninvasive way to stimulate gamma waves in mice. Their solution was to place the animals in a dark chamber and then flash a light-emitting diode at 40 Hz. This flickering triggered gamma waves in the visual cortex of the animals’ brains. After Aβ-overproducing mice watched the flickering light for an hour every day for a week, the animals had fewer amyloid plaques in their visual cortex compared with mice that just sat in the dark.

By restoring gamma waves disrupted by the neurodegenerative disease, “we can activate immune genes in the brain, which kick-start microglia to remove Aβ plaques and possibly halt the progression of Alzheimer’s disease,” said Annabelle C. Singer, a member of the team now at Georgia Institute of Technology.

“More and more we’re finding that microglia drive the pathophysiology of Alzheimer’s and other neurodegenerative disorders,” says Terrence Town of the University of Southern California, who was not involved in the work. Town and Weizmann’s Schwartz hope researchers try to piece together the biological mechanism connecting gamma waves and microglia activation. But Town thinks the biggest question is whether the findings will translate to people.

Cognito Therapeutics, a medical technology company, has licensed the MIT team’s intellectual property and is working on a gamma-stimulating method that could be tested in people. The light-flickering method generates gamma waves in the visual cortex, a region that isn’t usually affected by Alzheimer’s in people. To produce such oscillations in areas such as the hippocampus, which are affected by the disease, the researchers may have to explore other methods. If so, the MIT team points out that previous work has shown that many stimuli or activities can create gamma waves, even meditation.

Comments
khereddin Ennouri Ph.D Neuroscience (March 8, 2017 2:16 AM)
For humans it is the combination theta Gamma...
Reply »