With 20 other billionaires, Microsoft founder will invest in “breakthrough” technologies 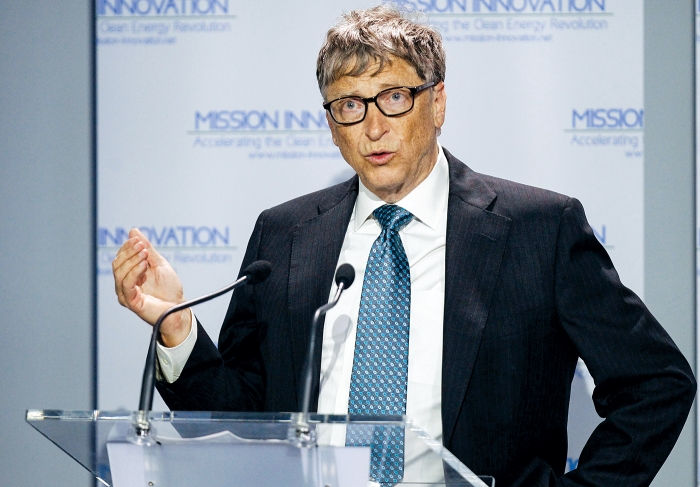 Bill Gates and fellow billionaires have formed a $1 billion venture capital fund aimed at commercializing energy and other technologies that dramatically reduce greenhouse gas emissions. The fund, which calls itself Breakthrough Energy Ventures, is a subset of an investor organization called the Breakthrough Energy Coalition.

The coalition came together last year as climate talks began in Paris that led to a global climate agreement. Now, Gates and 20 BEV partners—including Jack Ma of China’s Alibaba, cleantech investor Vinod Khosla, Amazon founder Jeff Bezos, and venture capitalist John Doerr—will begin hiring professional staff to select and fund technologies that have the potential to knock 5% or more off global emissions from fossil fuel use.

In a conference call, Gates said the funds have already been committed and that additional fund-raising is planned for 2017. BEV will operate like a traditional venture capital fund and is intended to make a financial return.

But whereas venture investors normally expect to recoup their funds within five years or so, BEV will work on a timeline as long as 20 years. Another big difference is that BEV will have the wherewithal to continue to back firms in later funding stages with tens or hundreds of millions of dollars, according to Doerr.

The group wants to make investments that address emissions in five sectors—electricity, transportation, agriculture, manufacturing, and buildings. As possible areas of investment, Gates pointed to proven, but pricey, technologies such as solar fuels—where energy from the sun is converted to hydrocarbons—and grid-scale energy storage. In both cases, Gates said, government-funded basic research has shown promise, but the innovations must become about 100 times more efficient to make a financial and climate impact.

Khosla, meanwhile, mentioned start-up companies LanzaTech, which converts emissions from steel plants into ethanol, and Impossible Foods, a developer of plant-based meat substitutes, as the type of technologies that fit the BEV mandate.

The group is making no promises, Doerr acknowledged, but he said he is confident the investments will result in better, cheaper energy by 2050. “I’m in awe of the power of entrepreneurs,” he said. “I would never underestimate the power of energy entrepreneurs to change the world.”

Comments
witanage (December 14, 2016 6:46 AM)
Could you please try to help Sri Lanka, a tiny islands needs some global hand to management of the forestry and also a good look at waste management system. , the mismanagement of these both areas going to distroy many species of birds, flora/fauna,and huge Elephants from this small island that would be a loss for whole world . Though we have a effective solutions for this its not easy to make them understand as its always against the quick solutions bring forward by environmentally insensitive managers.But all these are belong to the world heritage and the world leaders should join to save the world in this direction. Thanks for the invitation to save the world,not only human race.
Reply »