Dow CEO will head committee aimed at turning around manufacturing 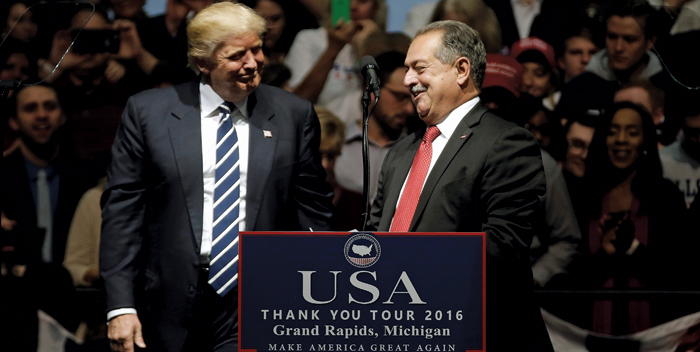 At a rally in Grand Rapids, Mich., on Dec. 9, Trump announced Liveris’s appointment to head the American Manufacturing Council, which Trump says “will be tasked with finding ways to bring industry back to America.” It is unclear if this means he will lead the existing “Manufacturing Council,” a committee made of industry leaders, which advises the Department of Commerce.

Timed with the appointment, Dow announced that it would build a new innovation center in Midland, Mich. The company says the new facility will support 200 R&D jobs. Dow says some 100 of the jobs will be newly created, and another 100 will be “repatriated” from other Dow facilities around the world.

Dow says the new facility will focus on combining its existing chemistries with technology that it acquired earlier this year when it assumed full ownership of the Dow Corning silicones business.

At the rally, Trump talked about the decline of U.S. manufacturing jobs since the U.S. signed the North American Free Trade Agreement and China joined the World Trade Organization. He pledged to reduce corporate taxes from 35% to 15% and lower regulations by 80 to 85%.

Liveris has been outspoken about the state of U.S. manufacturing. Back in 2011, he published the book “Make It in America: The Case for Re-Inventing the Economy.” In it, he argued that the U.S. government should follow the lead of its foreign counterparts and offer incentives to attract manufacturers to the U.S. “Around the world, countries are acting more and more like companies: competing aggressively against one another for business,” he wrote.

Liveris, who also spoke at the rally, wasn’t shy about connecting the new R&D center to the pro-manufacturing stance of the incoming president. “President-elect Trump, I can’t tell you, I tingle with pride listening to you,” he said. “You’re paving the way with your administration, with your policies, to make it easier to do business in this country—not a red tape country, but a red carpet country,” he said.

However, trade policies possibly offer a point of contrast between Trump and Liveris. Trump wants to scrap the recently negotiated Trans-Pacific Partnership agreement between the U.S. and Asian nations. Dow Chemical has endorsed TPP. “TPP is critically important for Dow, our employees, and our customers,” Liveris said in a press release in March.

Moreover, Liveris is locking arms with Trump at a time when Dow has major business before the federal government, most notably approval of its merger with DuPont. This deal, along with other megamergers in agricultural chemicals, is facing close scrutiny by regulators because of fears of over-concentration in agricultural chemical and seed markets. Iowa Sen. Chuck Grassley (R) held hearings on the topic in September.