by Melissa Pandika, special to C&EN 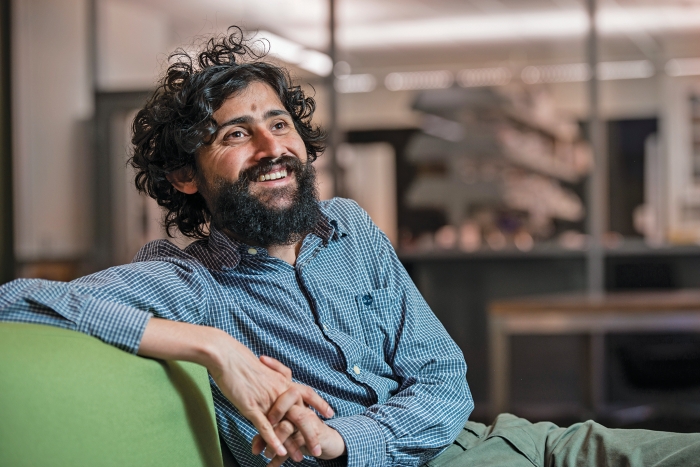 The Prakash group’s most recent device is a human-powered centrifuge, capable of isolating malaria parasites in blood. Inspired by a twirling toy known as a whirligig, the team built the device, called the paperfuge, by stringing paper disks together with twine running through the center. Rhythmically pulling the twine spins the disks, loaded with blood samples in attached capillary tubes, at up to 125,000 rpm. Health workers can then examine the samples, which are treated with a fluorescent stain that binds to the parasites, under a microscope to diagnose malaria using the telltale glow at the right layer in the tube. Prakash spoke to Melissa Pandika about how he developed the paperfuge and the challenges of adapting diagnostic tools to underserved areas.

How did you come up with the paperfuge?

I was in Uganda in 2013 during a field trip to test our ideas. I remember seeing a centrifuge in a clinic being used as a doorstop; there was no electricity. That triggered the question: Is it possible to build high-powered centrifuges purely driven by human power?

I started thinking about toys. The whimsical side of toys is that they hide surprises. I had a visiting student who happened to be a circus artist earlier in his life. He actually taught me how to throw yo-yos. We built a centrifuge using that type of principle. We got to a point where we were regularly throwing 4,000- or 5,000-rpm spins and were able to separate red blood cells from plasma. But (a) we wanted to go faster, and (b) it required a certain level of skill to throw these yo-yos.

Then we asked ourselves, “What if we explore other toys?” I bought a whole bunch of spinning tops, a whirligig, and a couple of other toys. A postdoc in the lab, Saad Bhamla, imaged one of these whirligigs with a high-speed camera. We were able to record speeds as high as 10,000 rpm. That was a big “Aha!” moment. A whirligig is much easier to teach others how to use, and the speeds were double what we were able to get with yo-yos. We wrote down a mathematical model that describes the dynamics of this object. Using that, we were able to optimize the paperfuge to go all the way to 125,000 rpm. Now, in 90 seconds, we can separate plasma from red blood cells. Within 10 minutes, we can separate red blood cells carrying malaria parasites from those without parasites.

How does the paperfuge work?

The paperfuge consists of disks that are made out of paper coated with plastic that contains channels, or we can attach capillaries. We fill those capillary tubes or channels with the fluid we’re interested in. You create twists in the wire, and as you pull on it, the twists in that wire convert your pulling force into rotational force. It’s what we call an oscillatory centrifuge because it goes back and forth, clockwise and anticlockwise. But that change in direction does not affect the actual separation process because the centrifugal force is still pointing outward. It’s a continuous system, unlike the yo-yo.

Why did you test for malaria first?

We wanted to choose a hard problem. The small density difference between a cell with a parasite inside and one without a parasite requires a high-powered centrifuge to separate them. Now that we’ve solved that harder problem, we can pick the low-hanging fruit of diagnosing other diseases like filariasis, a worm infection that can cause painful, disfiguring swelling, in which the parasites are bigger.

Centrifugation is a very old field in analytical chemistry, and there are a lot of different ways of using the technique—for density gradient centrifugation, as part of cell lysis, and for other types of separation. It’s a very versatile technique. Now we’re trying to adapt many of these methods to our device.

What are the limitations of the paperfuge?

The biggest limitation is that it’s a system designed for small volumes. The other limitation is social acceptability. Somebody might look at it and say, “It’s a toy. It’s not serious.” When we talk about the paperfuge to some of the doctors and health care workers we work with in Madagascar, they’re kind of skeptical. But when you pull it out and do one quick demo, their eyes light up. They get it because they’ve lugged all these instruments out there that don’t work in remote settings.

As with anything in global health, scaling up is hard. For global health specifically, the markets and the margins are so low that it’s not about companies jumping on it, so we actually work hard on scaling up manufacturing and keeping the prices low. It takes a long while to build the infrastructure around bringing these technologies to where they are needed the most.

How have you tested the frugal design tools you’ve developed?

We tested the paperfuge on malaria samples with our collaborators in Madagascar. This was at two sites with maybe around 50 samples, but we haven’t published the findings yet. We are going back again later this year to increase the sample size and include health care workers to show that the device doesn’t just work in our hands. Madagascar is important because a significant portion of the population has endemic malaria. There are few main roads, and it’s extremely difficult to get to any conventional hospitals.

We also made 50,000 Foldscopes and sold them to anybody who wanted one but requested they share what they did. Many people have written academic papers about their results with the microscopes. There is also the citizen science side. Microcosmos.foldscope.com is an incredible database of projects by people around the world. There’s a group in Washington, D.C., that explores pollen grains. There’s a kid in Namibia who imaged these gigantic bacteria. This year, in 2017, we’ll be shipping a million microscopes. We’re also trying to bring molecular assays out to the field using the chemistry kit-on-a-chip.

Melissa Pandika is a freelance writer. A version of this story first appeared in ACS Central Science: cenm.ag/prakash. This interview was edited for length and clarity.