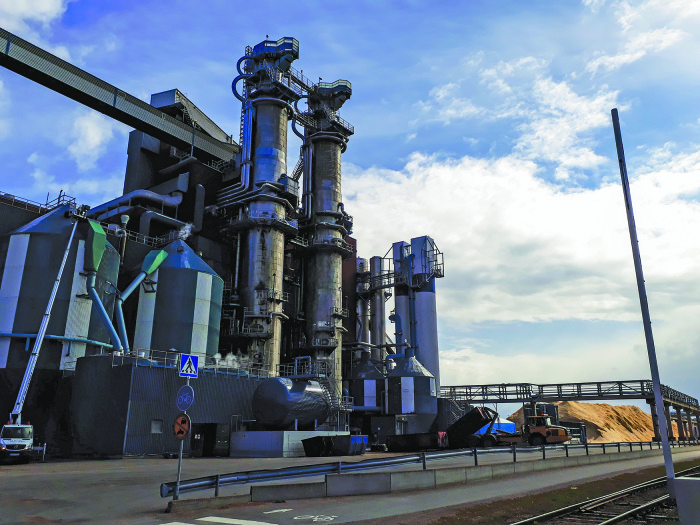 Europe’s largest pulp and paper mill—in Skutskär, Sweden, 160 km north of Stockholm—is an exercise in economies of scale. Its three wood pulp digesters rise more than 50 m above the nearby Baltic Sea, and the stockpile of logs waiting to be converted into paper is 10 m deep and trails for kilometers into the distance.

Stora Enso at a glance

▸ When established: Records date from the 1300s

Inside the mill, wood is put through multiple pulverizing, separating, bleaching, and other processing steps. At the other end, rolls of white paper, each weighing up to 33 metric tons, are eased off the production line ready for shipping to customers.

But Stora Enso, the plant’s owner, is in trouble. Its sales last year of $10.3 billion were down more than 25% from five years earlier. Its paper business has been hit particularly hard and now represents less than one-third of sales, compared with more than 70% a decade ago. Cardboard and pulp for products such as diapers have been the firm’s saving graces.

Other European papermakers are in similar straits. A shift to online publishing—and away from print—means global paper demand is declining, laments Andreas Birmoser, head of strategy and business development for Stora Enso’s biomaterials division.

In a bid to stop the financial rot, the firm wants to convert wood by-products it doesn’t use—amounting to 50% of each tree—into industrial chemicals. By processing rather than burning nonfibrous wood components, Stora Enso can open up an entirely new line of business, managers say. The effort is young, but they are encouraged so far.

The company is developing technologies to convert lignin into products such as adhesives and convert hemi-cellulose into five- and six-carbon sugars for processing into a range of useful chemicals.

It aims to do so by bolting biorefineries onto its pulp and paper mills. This is an efficient strategy, argues Henrik Holm, manager of the Skutskär plant, because the firm already has much of the infrastructure in place and will require only a small number of additional employees.

Stora Enso is now in a technology development phase ahead of making a major investment to build a biorefinery, Birmoser says. But the firm first has a raft of chemistry and industrial processing challenges to resolve.

It made an initial step to develop the processes it needs in 2014 with the acquisition of the U.S. biomaterials start-up Virdia for $62 million.

Using a hydrochloric acid-based technique initially created by Virdia, Stora Enso is now readying a $39 million demonstration plant in Raceland, La., near New Orleans, that will convert cellulosic biomass from sugarcane waste into five-carbon sugars, including the monosaccharide xylose. The firm will then convert xylose into xylitol, a sugar commonly used as a sweetener in toothpaste and chewing gum.

The facility will have an annual capacity of several thousand metric tons of xylose, and a little less than that of xylitol. It is on schedule to be fully operational by the end of this year, Stora Enso says.

In a subsequent phase, the demonstration facility will be used to test sugars ­derived from trees and other materials. The firm has already begun this work at a smaller scale in its pilot facility in Danville, Va.

Stora Enso will apply lessons learned from the pilot and demonstration facilities to its pulp and papermaking operations in Finland, Sweden, and Uruguay, Birmoser says.

The firm is also keen to develop applications involving lignin. In 2015, it started up a commercial plant with capacity to produce 50,000 metric tons per year of 95% pure lignin at its Sunila mill in Kotka, Finland. The lignin can be a direct replacement for the phenol used to make adhesives for plywood and other wood composites. Stora Enso is also working on other ways of using lignin, including converting it into carbon black.

Although Stora Enso has some pilot projects on the way, it is also ramping up more basic research across a range of technologies. It recently completed construction of a research center in Stockholm for its fledgling biomaterials division. The 4,900-m3, wood-clad building has 1,600 m3 of lab space.

About 70 researchers already work in the building, and recruitment for more scientists is ongoing. The firm is bringing in experienced industrial chemists. For example, it hired Roxana Barbieru, former regional head of R&D for the dyestuff maker DyStar, to lead the center’s application development team. Stora Enso employs about 150 people in R&D worldwide.

Already under way at the center is development of a method for making carbon fiber from a combination of lignin and cellulose. “We’re working on a novel process with selected R&D partners with encouraging progress,” says Heidi Saxell, an R&D manager for Stora Enso and a former research scientist with BASF.

Other paper companies have similar ideas. In 2015, Finnish papermaker UPM opened a 100,000-metric-ton-per-year wood-to-biodiesel plant, the first such facility in the world, at its mill in Lappeenranta, Finland. It required a $200 million investment.

Smurfit Kappa is another papermaker that has initiated chemical production. Since 2012, in association with Stockholm-based technology firm Chemrec, it has been making 4 metric tons per day of dimethyl ether from syngas derived from the waste of a mill in Piteå, Sweden.

Stora Enso claims to be ahead of its peers in the quest to produce chemicals, but it still has a number of blanks to fill in: It has yet to ascertain exactly which products will best suit its mills, what chemicals will generate the most value, and how much money it will invest. These are decisions the firm will make in the next couple of years, Birmoser says.

To accelerate its transition and sharpen its focus, the firm is seeking out novel technologies that it could license or acquire, says Dirk den Ouden, technology scouting director for Stora Enso’s biomaterials division.

Becoming a producer of biobased polymers is one option that intrigues den Ouden. By 2030, the Danish plastic toy bricks company Lego plans to switch its main raw material from oil-derived acrylonitrile-butadiene-styrene resin to a polymer that comes from renewable resources. With its high volume and quality requirements, Lego, den Ouden says, is exactly the kind of customer that Stora Enso would one day like to have.