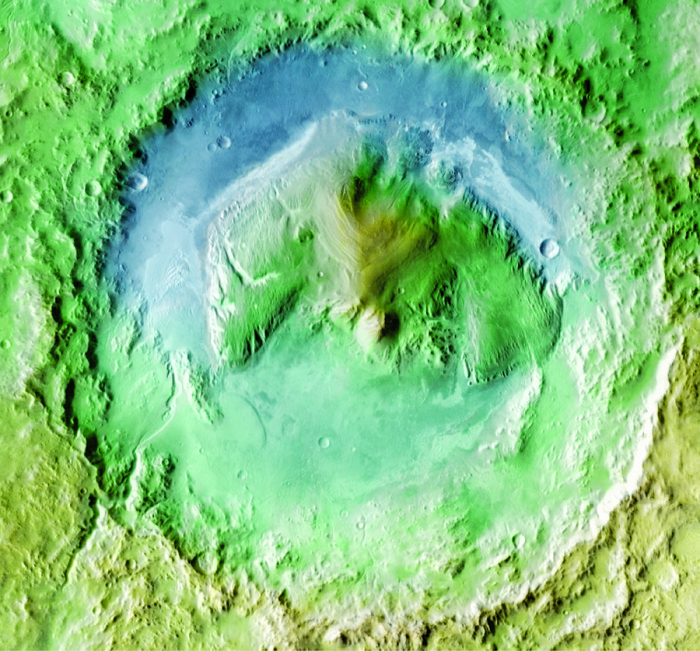 Credit: NASA
The Gale Crater on Mars was once a briny, habitable lake.

The ancient Gale Crater on Mars, once filled with water, could have been habitable during Mars’s early history, with oxidant-rich and oxidant-poor layers that became saltier as the lake dried up, according to a new study (Science 2017, DOI: 10.1126/science.aah6849).

The data, sent back to Earth from NASA’s Curiosity rover, not only add to growing evidence that ancient Martian environments could have supported life but also demonstrate the abilities of sophisticated robotic instruments to probe fine geological details of an extraterrestrial environment.

Curiosity landed inside the 150-km-diameter, 3.8 billion-year-old Gale Crater in 2012, and quickly accomplished, through its study of rock chemistry, its original goals of investigating potential habitability on Mars.

The rover’s mission has been extended indefinitely, and scientists are now trying to pinpoint the times during Martian history when microbial life may have had the chance to develop.

To that end, a team led by Joel Hurowitz, a geoscientist at Stony Brook University, reconstructed portions of the lake bed’s several-billion-year history, using data from Curiosity’s first 1,300 days of exploration. 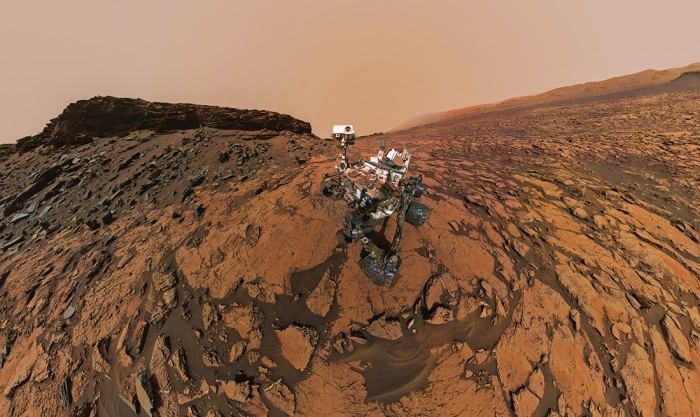 Credit: NASA/JPL-Caltech/MSSS
The Curiosity rover took this picture of itself while collecting samples from inside Gale Crater.

The effort involved sedimentologists, geochemists, mineralogists, and instrument scientists, who pored over data from multiple sources, including Curiosity’s X-ray diffraction instrument and its α-particle X-ray spectrometer.

The team concluded that the ancient lake contained a mineral brew with a neutral to alkaline pH that could have sustained life between 3.8 billion and 3.1 billion years ago. The geology that Curiosity explored showed that the lake was also geochemically layered, similar to Earth’s geology.

At the top, where photochemically generated O2 from the atmosphere could mingle with surface water, oxidizing compounds helped form oxidized iron minerals and phyllosilicates in rocks with coarse-grained structures. At the lower regions, the water was devoid of oxidants and formed silica and mixed-valence iron minerals in rocks with fine-grained sediment.

“It’s really exciting for us that we were able to reconstruct these aspects of Martian paleo-environment at such a high level of detail,” Hurowitz tells C&EN.

For example, Curiosity data showed that the lake contained a number of habitable subenvironments for potential microbial life, he says. These environments could have nurtured microbes that thrive in oxidant-rich conditions, in oxidant-poor conditions, and at the interface between both.

The team also deduced that as the lake gradually dried up, it became saltier, possibly forming the calcium sulfate veins that Curiosity found in the lake bed’s sediment.

“That’s good for habitability,” he says, “but the interest is, I think, in the ability to get detailed geochemical information on a stratigraphic sequence on Mars.”