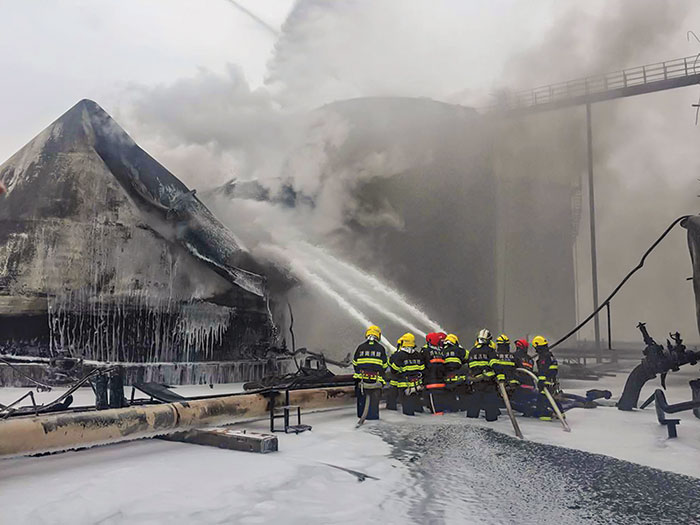 For reasons still unknown, a liquefied gas tanker exploded at a petrochemical plant in the city of Linyi in China’s Shandong province. The blast killed 10 people, according to Chinese media reports.

The explosion occurred on June 5 in the loading area of Linyi Jinyu Petrochemical. It shook homes and shattered windows, causing panicked local residents to flee. Firefighters needed 15 hours to control the fire ignited by the accident, local media reports say.

Little is known about Jinyu, which doesn’t seem to have a website. According to Chenhr, a Chinese chemical industry website, Jinyu was formed in 2010. It produces or stores basic chemicals and fuels, including propane, butane, isobutene, isooctane, pentane, polyvinyl chloride, and other materials. Jinyu employs 200, Chenhr reports.

After the accident, the government of Shandong issued a statement saying that more needs to be done to implement work safety directives issued by the Chinese Communist Party.

The explosion is a setback in China’s effort to reduce deadly accidents at industrial facilities. In 2015, after a massive explosion at a chemical storage warehouse in Tianjin that killed at least 165, the Chinese government ordered safety inspections throughout the country at facilities producing or handling dangerous goods.

At the time, the inspections were blamed for disrupting operations at many plants and delaying the start-up of newly built facilities. In a position paper, the petrochemicals, chemicals, and refining group of the European Union Chamber of Commerce in China complained that the government considers too many chemicals to be hazardous.

The chamber also claimed that new regulations China adopted in 2015 to govern hazardous chemicals were not sufficiently clear and were thus interpreted differently across the country.