[+]Enlarge
Credit: Adapted from Nature (both)
In the Skiniotis-Kobilka structure (left), GLP-1 receptor’s extracellular domain is dark green and its transmembrane domain is light green; GLP-1 peptide is orange; Gs protein is gold, light blue, and dark blue; and an antibody fragment is gray. In the Marshall structure (right), GLP-1 receptor’s extracellular domain is brown (with glycosylation modification stick figure), the receptor’s transmembrane domain is cyan, and GLP-1 peptide is a mostly-yellow stick figure. 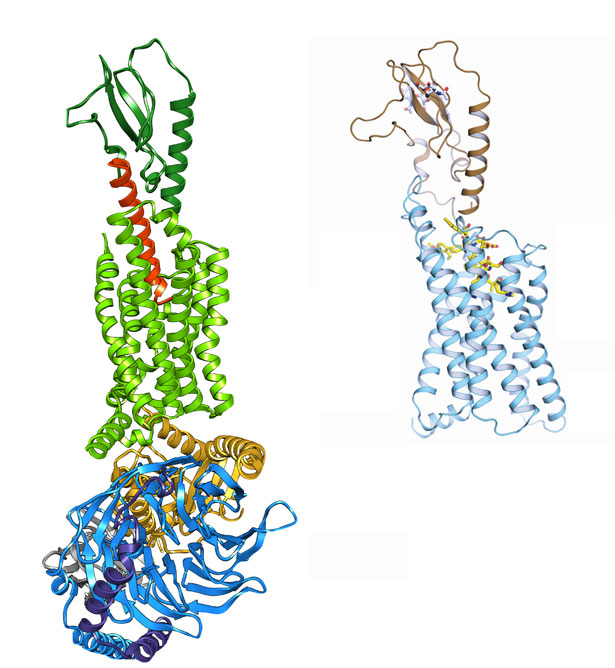 Credit: Adapted from Nature (both)
In the Skiniotis-Kobilka structure (left), GLP-1 receptor’s extracellular domain is dark green and its transmembrane domain is light green; GLP-1 peptide is orange; Gs protein is gold, light blue, and dark blue; and an antibody fragment is gray. In the Marshall structure (right), GLP-1 receptor’s extracellular domain is brown (with glycosylation modification stick figure), the receptor’s transmembrane domain is cyan, and GLP-1 peptide is a mostly-yellow stick figure.

Two independent research teams have determined structures of glucagon-like peptide-1 (GLP-1) receptor bound to peptide ligands, feats that could aid the discovery of new drugs for diabetes and other conditions.

GLP-1 receptor is an important drug target: Binding of the peptide hormone GLP-1 activates the receptor, causing cell signaling that helps regulate glucose metabolism and insulin release from the pancreas.

GLP-1 itself is rapidly broken down in the body and therefore can’t be used as a drug. But several peptides that mimic GLP-1’s activity and have better stability and longevity are approved type-2 diabetes drugs. These include albiglutide (Eperzan and Tanzeum), dulaglutide (Trulicity), exenatide (Byetta and Bydureon), liraglutide (Victoza and Saxenda), and lixisenatide (Adlyxin and Lyxumia). Researchers are also investigating activators and deactivators of the receptor as treatments for obesity, endocrine and cardiovascular disorders, and neurodegeneration.

Because all the approved GLP-1 mimics are costly to produce and must be injected, scientists are exploring smaller peptides or other GLP-1-mimicking small molecules that might be cheaper to make and that patients might take orally. But those smaller agents have been hard to identify and develop, and none has yet been approved.

Georgios Skiniotis of University of Michigan Medical School, Brian K. Kobilka of Stanford University School of Medicine, and coworkers including researchers at the structure-based drug discovery company ConfometRx determined the cryo-electron microscopy structure of a rabbit GLP-1 receptor bound to full-length human GLP-1 peptide and Gs, a G-protein that transmits receptor signals inside cells (Nature 2017, DOI: 10.1038/nature22394). It has 3.9-Å resolution at the peptide-receptor and receptor-Gs interfaces.

Fiona H. Marshall and coworkers at Heptares Therapeutics obtained the 3.7-Å-resolution X-ray crystal structure of mutationally stabilized human GLP-1 receptor bound to a shortened and modified human peptide (Nature 2017, DOI: 10.1038/nature22800). The modifications “facilitate the ability to get receptor costructures with multiple different types of ligands, including quite weak ligands,” Marshall says. “This is really important when you are doing structure-based design during lead optimization” of new receptor-targeted agents.

The nature of GLP-1 peptide-receptor interactions “has been unknown and very difficult to model with any accuracy,” comments GLP-1 receptor expert Patrick Sexton of Monash University, adding that the two studies together provide “broader insights than those available from either one alone.” He notes that the Skiniotis-Kobilka structure reveals interactions of the full-length peptide not included in the Marshall structure but that the latter is at higher resolution and shows interactions in greater detail.

Marshall says she believes that the complex network of peptide-receptor interactions revealed in the structures “would be very difficult to mimic with a small-molecule drug, which would be the ideal if you wanted an oral therapy for diabetes.” But her group did use information from its structure to design three GLP-1 peptide mimics that are 10 residues long, one-third the length of the native hormone. “These are easier to formulate as drugs” than longer peptides “and have the potential to be developed as oral therapies,” Marshall says.

Other small-molecule mimics may be out there as well, she notes. One approach to find them, eased by the new structures, she says, “is to look for allosteric modulators that bind to a different site than the peptide does but can still activate the receptor.”

Pharmaceuticals
Structure of antipsychotic drug target solved
Pharmaceuticals
Marijuana receptor caught in the act
Share X
To send an e-mail to multiple recipients, separate e-mail addresses with a comma, semicolon, or both.
Title: Two teams solve structure of elusive diabetes drug target
Author: Stu Borman
Chemical & Engineering News will not share your email address with any other person or company.