The color of organic chemistry and a meaty structure mistake

Color your own chemistry 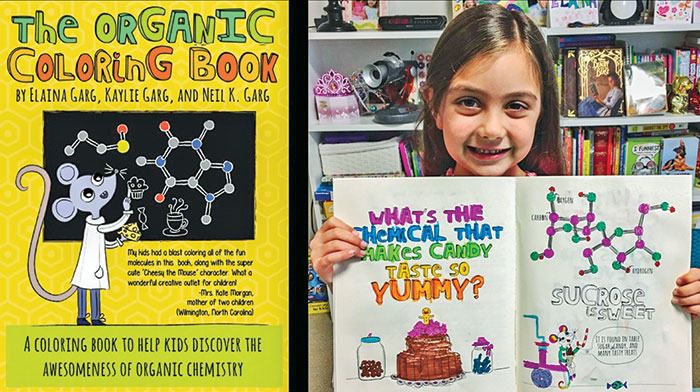 When his daughter Kaylie was four, University of California, Los Angeles, chemistry professor Neil Garg noticed a disturbing trend: She was scared of chemicals.

“I would give her something new, and she would say, ‘Is that a chemical?’ ” Garg remembers.

So Garg set out to help Kaylie and her older sister, Elaina, understand that chemicals are vital to some of their favorite things. Because they love to color, he thought a coloring book might be the perfect vehicle to spread that message to his girls and other kids their age.

Garg involved Elaina and Kaylie in creating “The Organic Coloring Book,” starting with deciding which chemicals to present. “We came up with the chemicals that they were curious about,” he says.

Elaina’s favorite chemical is dimethylpyrazine, which is a vital part of bacon’s smell. Kaylie’s is the cyanidin that colors blueberries, one of her favorite foods.

Garg hired a graphic designer to draw the book based on structures provided by Garg and several of his graduate students. Although the structures are in two dimensions on the page, he has been happy with how well his kids and others understand what they are seeing. “It’s not too far from the creative imagination of a kid to understand what it looks like in 3-D,” he says.

The designer came up with the idea of introducing an animal that guides readers through the book, named Cheesy the Mouse. Dressed in a lab coat, Cheesy introduces readers to the various chemical questions and answers. Kaylie chose a mouse guide “because I like mice and they love cheese.”

For 1-sulfinylpropane, Cheesy cries as she shows how the chemical in onions makes your eyes sting. “Our eyes make tears to wash the chemical away,” Cheesy explains.

The coloring book has sold about 100 copies via Amazon.com already, and the family has given them away at both girls’ schools.

The book should attract parents who are interested in teaching their kids about how the world works. “It’s really something for kids to at least get exposed to chemicals,” Garg says. 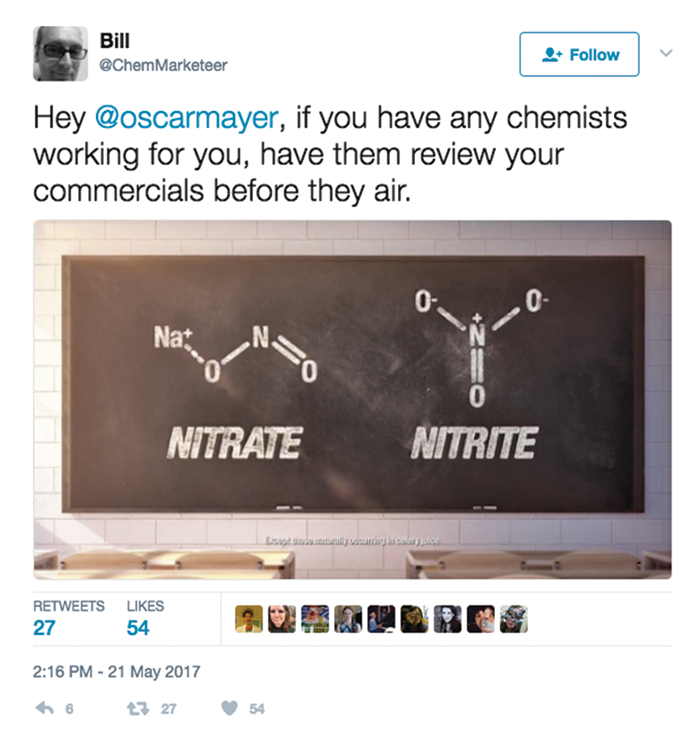 The advertising department at Oscar Mayer could have used a coloring book—or other guidance from chemists—on its recent advertising campaign.

The company made the exciting announcement that it had removed all nitrites and nitrates from its hot dogs. But its television ad flipped the two structures, causing a minor uproar on Twitter. “Hey @oscarmayer, if you have any chemists working for you, have them review your commercials before they air,” @ChemMarketeer tweeted.

The ad features another chemical mistake just a few seconds later: A structure labeled “artificial preservatives” includes an aromatic ring with its double bonds in all the wrong places.

Spokesperson Lynne Galia of Kraft Heinz, which owns Oscar Mayer, tells Newscripts they are aware of the issue. The structures “have been corrected and will be reflected in the ads on air soon,” she says.

If they need more help, they might be able to call Elaina and Kaylie Garg.

Science Communication
Chemists are finding their place on TikTok
Periodic Table
Meet the 'I Spy a Periodic Table' Readers’ Choice winner
Food Science
Chemistry in Pictures: Not-so-simple syrup
Share X
To send an e-mail to multiple recipients, separate e-mail addresses with a comma, semicolon, or both.
Title: The color of organic chemistry and a meaty structure mistake
Author: Andrea Widener
Chemical & Engineering News will not share your email address with any other person or company.