These four foods are ripe for CRISPR gene editing

Agriculture observers see tomatoes, mushrooms, wheat, and corn among the first to benefit from the hot new technique

These four foods are ripe for CRISPR gene editing

“Deterioration in flavor quality of the modern commercial tomato relative to heirloom varieties is a major cause of consumer complaint,” an international team of geneticists dryly note in a recent paper. The head of the team, Harry J. Klee of the Plant Innovation Center at the University of Florida, and coauthors examined 398 modern, heirloom, and wild tomatoes to identify missing flavor components. They found that 13 important flavor volatiles, including guaiacol and methyl salicylate, were significantly reduced in modern varieties and identified the locations of genes responsible for making the chemicals. In addition, they found that efforts to breed larger fruit had resulted in lower sugar content. The team says the research points to genes that can improve flavor quality in tomatoes and other fruit crops (Science 2017, DOI: 10.1126/science.aal1556). While other groups have shown that CRISPR can be used to edit genes in tomatoes, it has not yet been used to add a missing gene. 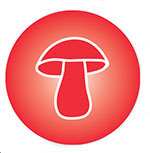 White button mushrooms, once they are bruised or sliced, don’t stay white for long. The culprit behind mushroom browning is the pigment melanin. Pennsylvania State University associate professor Yinong Yang traced the melanin production to a specific polyphenol oxidase gene in the mushroom and used CRISPR/Cas9 to make a small deletion in the gene. The result was nonbrowning mushrooms. But Yang is famous in the biotechnology community for what happened next: In October 2015, he wrote a letter to the U.S. Department of Agriculture asking it to confirm that his mushroom, which does not contain foreign genes, would not be regulated. Five months later, USDA wrote back with confirmation. The ruling opened the door for many other crops developed using CRISPR/Cas9 technology. Yang has filed a provisional patent application for the mushroom.

Many important agriculture crops are polyploids, meaning they have several copies of genes that may not all be identical. Wheat has three copies of most of its genes, including the gene that makes it susceptible to powdery mildew, one of the world’s most destructive plant pathogens. The crop’s complicated genome hinders efforts to create a resistant plant using traditional breeding. Yanpeng Wang of the Institute of Genetics & Developmental Biology at the Chinese Academy of Sciences and coauthors used CRISPR/Cas9 as well as transcription activator-like effector nuclease (TALEN) editing techniques to deactivate the susceptibility genes and turn up the plant’s defenses against powdery mildew (Nat. Biotechnol. 2014, DOI: 10.1038/nbt.2969).

Researchers at DuPont Pioneer built on earlier studies that found transgenic corn plants that overexpress a gene called ARGOS8 produce more grain under drought conditions than nontransgenic plants do. The gene reduces the plant’s sensitivity to ethylene, an important plant stress hormone. The team used a gene promoter for ARGOS8 from a native corn variety and inserted it via CRISPR into nontransgenic plants. The result was the plants produced more bushels per hectare during drought conditions and did not lose yield under well-watered conditions (Plant Biotechnol. J. 2017, DOI: 10.1111/pbi.12603).

Agriculture
How we’ll reengineer crops for a changing climate
Biological Chemistry
CRISPR advanced amid patent fight
Biological Chemistry
Bitterness in wild cucumber, melon, and watermelon
Share X
To send an e-mail to multiple recipients, separate e-mail addresses with a comma, semicolon, or both.
Title: These four foods are ripe for CRISPR gene editing
Author: Melody M. Bomgardner
Chemical & Engineering News will not share your email address with any other person or company.