A new formula for innovation 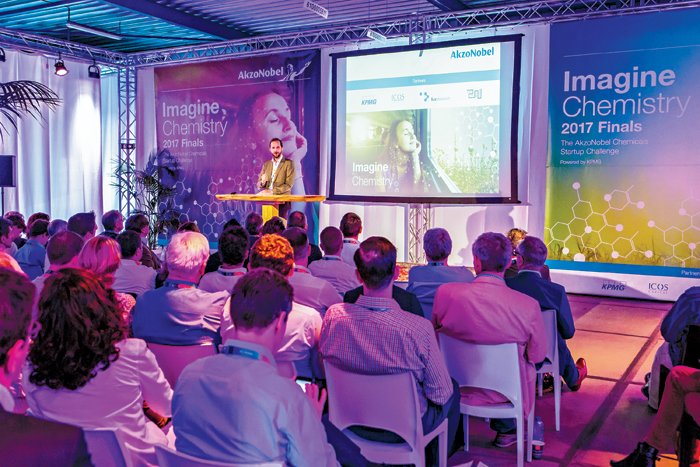 Credit: AkzoNobel
Nieuwenhuizen tells the 19 competition finalists what AkzoNobel is seeking from them.

For years, AkzoNobel has been struggling to innovate in seven key areas: plastics recycling, wastewater-free chemical production, cellulose-based alternatives to synthetics, biobased surfactants, biobased sources of ethylene, and highly reactive chemistries. R&D managers at the Dutch company now think they may have hit upon an approach that is innovation gold.

While AkzoNobel’s chemists haven’t given up on homegrown solutions, they are changing their tack and emphasizing innovation from outside the company more. AkzoNobel already has dozens of university collaborations for fundamental research. The latest effort is about getting to market more rapidly by working with start-ups that have suitable technologies already in development.

A competition recently debuted by AkzoNobel’s chemical business offers start-ups the prize of a commercial partnership if they can come up with solutions to targeted problems. The competition delivered a plethora of suitable start-ups to the company’s front door. And AkzoNobel has decided to work with no fewer than 10 of them.

Named Imagine Chemistry, the competition was successful enough that the firm already plans to repeat it and introduce it in its paints and coatings business in 2018. That also happens to be the year that AkzoNobel intends to split into separate chemical and paint companies.

When AkzoNobel launched the competition at the start of 2017, it was hoping to get 30–40 applicants. But on the back of a social media marketing campaign centered on Twitter and Facebook, the competition received 212 applications, 80 of which met the challenge criteria.

Additionally, more than 1,000 start-ups and academics registered with the Imagine Chemistry web platform, where discussions were spawned not only with AkzoNobel but also among registrants. Most of the applicants were unknown to AkzoNobel before the competition.

“There is so much stuff happening outside AkzoNobel, so many good ideas, that it would be a shame if we didn’t go out there,” said Thierry Vanlancker, head of AkzoNobel’s chemical business, speaking at the competition’s three-day final event earlier this month.

One area where AkzoNobel found competitors to be particularly strong was wastewater treatment. Of the finalists, four offer technologies for wastewater reduction. Akzo­Nobel awarded one of the four, U.K.-based uFraction8, a research agreement to develop its microfluidic technology, which the start-up says reduces dewatering costs by up to 75% compared with standard methods.

Overall, AkzoNobel whittled down the 80 suitable applicants to 20 start-ups and academics for the final event (one of which could not attend), held at its production and R&D complex in Deventer, the Netherlands. The high number of applicants increased the chances of finding game-changing technology, observed Peter Nieuwenhuizen, AkzoNobel’s global director for R&D and innovation. “It’s a numbers game,” he said.

And dollar for dollar, Nieuwenhuizen said, the numbers generated by the competition stack up well against the alternative approach: participation in an investment fund in which venture capitalists choose the start-ups and investors share the spoils.

Moreover, unlike in the hands-off approach of working with a venture capital firm, in Imagine Chemistry, AkzoNobel R&D staffers interacted closely with competitors. During the final event, 90 AkzoNobel employees and experts from partner companies mentored the start-up entrepreneurs and provided classes on topics such as intellectual property and developing a business proposition. “It is a chance to look not only at the technology but the people,” Nieuwenhuizen said.

The competition offers potential benefits for AkzoNobel’s R&D staff. “We are seeking to get infected by start-up passion,” Nieuwenhuizen said. The competition also helps shift the mentality of the firm’s R&D staff in a collaborative direction.

“Previously, our mentality was ‘I’m a good chemist, I can do it in-house.’ With Imagine Chemistry we are changing that,” he said.

From the 19 finalists, AkzoNobel offered three winning start-ups what it calls full partnerships and a further seven lesser prizes that include support for research or business activities and a rent voucher to help pay for space in the Deventer complex.

According to Nieuwenhuizen, one reason so many start-ups signed up for the competition is the generous terms of the full partnership. AkzoNobel offered the winners a product development contract in which the start-up retains ownership of its intellectual property. Any intellectual property developed during a partnership will be shared equally, he said.

As part of their prizes, the three main winners have access to mentoring, expertise, and facilities for scaling up and manufacturing with AkzoNobel. “It is a true partnership. We’re not just announcing a winner and giving out a financial award. We’re offering them a route to market,” Nieuwenhuizen said.

In contrast, most other chemistry competitions offer the winners cash prizes, he said. For example, 12 chemical companies, including BASF, Dow Chemical, and Sinopec, recently held IQ-CHem, a competition for petrochemical start-ups in which the winner was awarded $20,000.

Many of the Imagine Chemistry finalists said they welcome the structure of the contest and the terms of the winning prize. They include Jeremy Minty, chief executive officer of Ecovia Renewables, one of the three main winners. Ecovia has developed a fermentation process for making polyglutamic acid, an alternative to synthetic polyacrylates for thickening personal care products.

The offer of a partnership with AkzoNobel was a major draw for Ecovia, Minty said. He added that he was also impressed by the way the contest structure allowed finalists to network with experts from Akzo­Nobel and other organizations involved in judging the contest. Ecovia received “invaluable feedback” for further development of its business and technology, Minty said.

Minty started the company in 2014 based on technology borne out of his Ph.D. research at the University of Michigan on microbial ecosystems. Ecovia hopes its product will be commercial in two to three years, he said.

Another of the three top winners, U.S. start-up Industrial Microbes, genetically engineered bacteria to convert CO2 or natural gas into chemical building blocks in water at ambient temperature. AkzoNobel is looking at the technology as an alternative to its existing process for making ethylene oxide from fossil-fuel-sourced ethylene.

The third start-up to win a full partnership is Renmatix, a U.S. firm that uses high-pressure water to break down cellulosic plant biomass into sugars that can be converted into feedstock chemicals or fuel.

Further down the award scale, AkzoNobel handed uFraction8 a more limited research partnership for its post-bioreactor dewatering technology. “We don’t dewater fermentation broth yet, but we have got a whole lot of other things that need dewatering,” Nieuwenhuizen said.

Although many of the 19 finalists featured biotechnology approaches, Akzo­Nobel did select a Dutch software company as one of its 10 winners. The firm, FiliGrade, has developed watermarks to enhance plastics recycling. Engraved or lasered onto plastics, the watermarks can be picked up quickly by cameras stationed above conveyor belts in recycling plants. “It’s much cheaper than inserting a chemical marker,” said founder and CEO Johan Kerver.

Nieuwenhuizen hopes some of the competition winners will relocate to AkzoNobel’s Deventer complex, the home of its biggest chemical R&D center in the Netherlands, so it can interact with them more fully. In line with this strategy, AkzoNobel awarded six months of free rent at the site to the Belgian start-up InOpSys, which has developed an on-site wastewater treatment system.

A spin-off from KU Leuven, InOpSys combines readily available hazardous wastewater treatment technology into one integrated system that can be brought onto a site in a shipping container.

Relocation of some competition winners to Deventer could be the start of an influx of start-ups. Plans are under way to phase out organic peroxide production there and to convert the site into a multicompany innovation park focused on highly energetic chemistry. The conversion, which will involve a substantial refurbishment and building program, is set to cost $30 million. AkzoNobel aims to put in one-third of the money and raise one-third each from local and regional governments.

The plan should allow for the influx of 10 start-ups and 10 small companies. None of this year’s winning non-Dutch start-ups has disclosed whether it might move to Deventer. But AkzoNobel hopes that in the years ahead, a substantial number of its tenants will be winners of the Imagine Chemistry competition.

Nieuwenhuizen is betting that rubbing shoulders with start-ups will benefit the 270 R&D employees already working at the Deventer site. “We want to open this up for development and create a new ecosystem for ourselves,” he said.

Start-ups
AkzoNobel launches new start-up competition
Specialty Chemicals
Winning at a chemistry innovation contest in Sweden
Biobased Chemicals
Renewable chemical maker Avantium tries for an encore performance
Share X
To send an e-mail to multiple recipients, separate e-mail addresses with a comma, semicolon, or both.
Title: A new formula for innovation
Author: Alex Scott
Chemical & Engineering News will not share your email address with any other person or company.