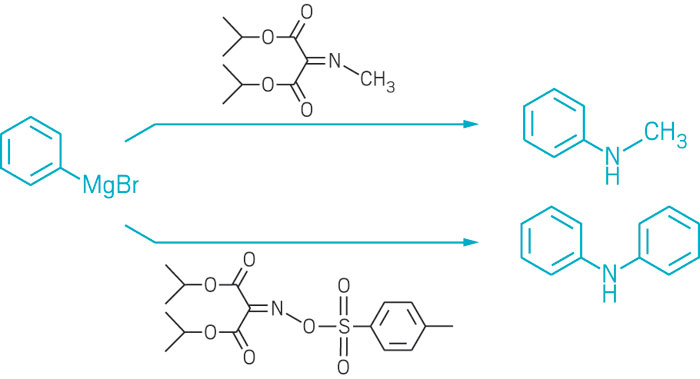 Organic chemists love their functional groups and perhaps the most hotly pursued of these amours is the amine. Arylamines, for example, are often important components of pharmaceuticals or other biologically active molecules. But the reactions commonly used to make them require transition metal catalysts and ligands that can be time-consuming to screen and expensive to remove should they contaminate a final product.

A new method for constructing both symmetrical and unsymmetrical diaryl-, arylalkyl-, and dialkylamines now gives chemists a general way to make these important molecular motifs without having to use transition metals and ligands. 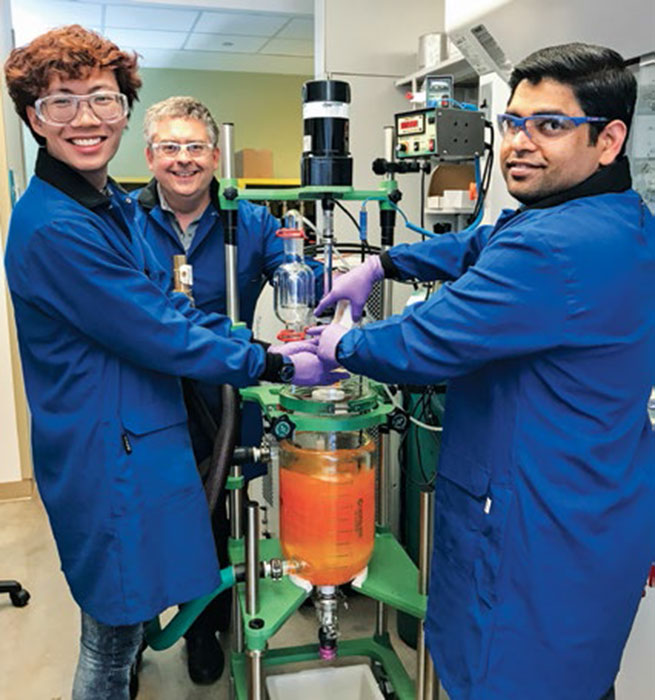 Umpolung—the fun-to-say chemical phenomenon in which a functional group’s polarity is reversed—underlies the new method. Chemists, led by László Kürti of Rice University, Daniel H. Ess of Brigham Young University, and Guigen Li of Nanjing University and Texas Tech University, have come up with a series of imines and an oxime—all derived from malonate—in which normally nucleophilic nitrogen becomes an electrophile. The polarity inversion can be attributed to the electron-density-withdrawing power of some neighboring carbonyl groups on those molecules. That property, plus some bulky substituents, guide nucleophiles such as Grignard reagents to preferentially attack this unusually electrophilic nitrogen. A single attack on an imine can lead to unsymmetrical products, while a double attack on the oxime produces symmetrical ones (J. Am. Chem. Soc. 2017, DOI: 10.1021/jacs.7b05279).

“This is something we stumbled upon a while ago when looking through the literature,” Kürti says of his umpolung approach. “We were not the first ones to think about this.” But chemists couldn’t use previous examples of imines with electrophilic nitrogen in a general manner to make many different types of secondary amines. So, Kürti’s postdoc Padmanabha V. Kattamuri made more than a dozen different imines in search of one that might have the desired reactivity.

The one he came up with is easy to make—Kürti’s lab regularly prepares its precursor ketone in 400-g quantities. From there, it’s simple to make any number of electrophilic imines from virtually any primary amine, or one can make the electrophilic tosylated oxime. Reaction with a nucleophile followed by removal of the malonate portion of the molecule via oxidation produces the desired secondary amine.

“The investigators have carried out an impressive study that includes the synthesis of a wide range of amines,” comments Erick M. Carreira, an expert in organic synthesis and heteroatom transfer reactions at the Swiss Federal Institute of Technology (ETH) Zurich. The work, he notes, “is bound to find wide resonance in the synthetic community.”

Carreira also points out that reagents capable of creating amines from simple organometallic reagents are highly sought after among synthetic chemists. “In this respect there is a special need for electrophilic nitrogen reagents that minimize any tendencies for dangerous run-away reactivity.” The imines and oxime made by Kürti, Ess, and Li’s team fill that niche.

Kürti notes that the imines can react not only with Grignard reagents but also with enolates, so chemists can make aziridines, morpholines, and other medium-sized nitrogen heterocycles using these electrophilic reagents. “This is a very versatile platform. It’s not just for making diarylamines,” he says. “You can make many other useful heterocycles with unique substitution patterns.”