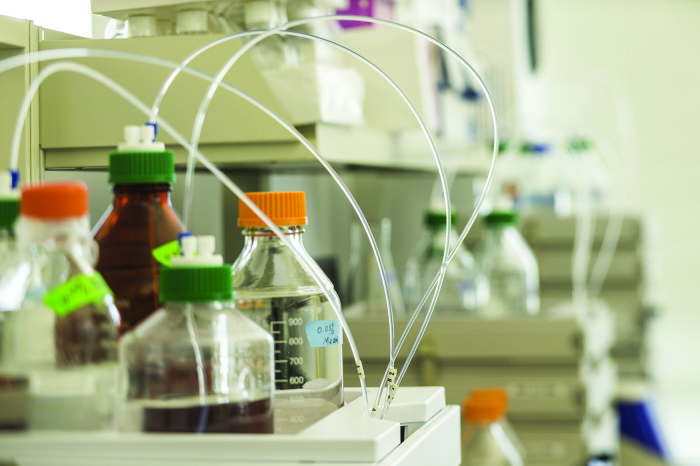 The San Francisco-based biotech firm has released results of a study showing that its developmental opioid, NKTR-181, provides pain release without the high levels of euphoria that can lead to abuse and addiction with standard opioids. Nektar previously reported that the drug significantly reduces pain in patients with chronic lower back pain.

Marketers of oxycodone and other opioids have confronted abuse with formulas intended to make their pills resistant to crushing and snorting. But drug abusers often find ways to thwart the controls and extract the pills’ active ingredients.

Nektar’s approach is to covalently bond, through an ether linkage, a short-chain polyethylene glycol to a five-ring morphinan, explains Chief Scientific Officer Stephen K. Doberstein. The molecule, whose structure will be published in the coming weeks, crosses the blood-brain barrier slowly, preventing the “rush” that abusers seek. “The speed of onset is super important,” Doberstein says.

Moreover, the ether linkage is more stable than the morphine ring, according to Doberstein. Thus, a potential abuser can’t use chemistry to break the linkage without denaturing the molecule’s active half.

NKTR-181 represents only the second example of a PEGylated small-molecule drug, Doberstein says. The first is naloxegol, a derivative of α-naloxol that Nektar licensed to AstraZeneca in 2009. FDA approved it in 2014 for the treatment of opioid-induced constipation.

Nektar continues to study the long-term safety of NKTR-181 in a Phase III clinical trial. Given its potentially large market, the company will seek a partner with pain drug experience. “We are talking to multiple companies,” Doberstein says.

I have been thinking, through the recent hype over opioid pain-killer problems, WHY, with all the amazing modern advances health-care, do we still have no effective safe pain medecine?

With osteo-arthritis, I'm quite aware that I can allow myself only periodic pain relief to avoid the need for an increasingly high dosage of opiate. The body learns to tolerate it remarkably quickly. Other pain-killers are ineffective.
Reply »

Gopinathan Padmanabhan (July 24, 2017 8:28 AM)
Cluster headaches are one of the most painful medical conditions. It has been reported on Clusterbusters web site that using LSD and certain magic mushrooms breaks the cluster cycles. Nektar should investigate if they can offer the chemical compounds of LSD or Magic Mushrooms without the high for Cluster headache sufferers!
Reply »