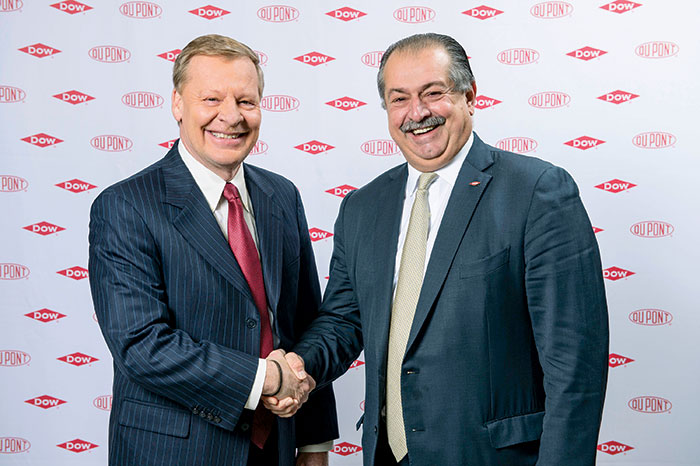 Credit: Dow Chemical
Breen (left) and Liveris shake on the deal in December 2015.

Dow Chemical and DuPont completed their merger last Thursday, Aug. 31, after the stock market closed, to form Dow­DuPont, the world’s largest chemical company by sales. But DowDuPont won’t be here for long. Managers’ ultimate goal is to split the new firm into three separate companies within 18 months.

DowDuPont at a glance

a C&EN estimates based on 2016 results from Dow and DuPont. The spin-offs account for DuPont’s pending asset swap with FMC.

Dow and DuPont combine for nearly $73 billion in annual sales. On the basis of recent stock prices, DowDuPont has a market capitalization approaching $150 billion.

When the merger was first announced in December 2015, the companies expected to complete their deal in the second half of 2016, but an in-depth investigation by European Commission antitrust regulators delayed it.

Regulators worried that the combined strength of the two firms in seeds and agricultural chemicals could limit choices and drive up costs for farmers.

The EC approved the deal earlier this year after DuPont agreed to sell a chunk of its pesticide business and most of its agricultural R&D to FMC. That transaction is still pending. The businesses being sold generated about $1.4 billion in sales in 2016. In return, DowDuPont is getting $1.6 billion in cash and FMC’s health and nutrition business.

DuPont CEO Edward Breen is the CEO of the combined firm. Dow head Andrew N. Liveris will be chair until he steps down next July.

The next order of business for these executives will be splitting up the company. One of the spin-off firms will house both of the companies’ agricultural businesses. It will have headquarters in Wilmington, Del., and have annual sales in excess of $14 billion.

The largest of the firms will be the materials science company. It will reside in Midland, Mich., and have about $45 billion in sales. It will be composed mostly of the former Dow’s petrochemical, plastics, and specialty chemical businesses. It is also slated to include DuPont’s polymers business and the Dow Corning silicones operation.

The smallest of the three firms will be a $13 billion specialty products firm with headquarters in Wilmington. It will house electronic materials businesses from both firms as well as DuPont’s safety and protection, nutrition and health, and industrial biosciences units.

But some investors are questioning the details of the split. Third Point, an investment fund and major Dow shareholder run by the activist investor Daniel S. Loeb, has suggested changes. For instance, Loeb says Dow’s food ingredients business is a better fit with the specialty products firm than the materials science company. He would also like to place Dow Corning into the specialty products company.

Dow and DuPont are taking the critique seriously and have hired the consulting firm McKinsey & Co. to evaluate the split plan. McKinsey’s report is due out soon.

Jimmy Leppert, a principal with the management consulting firm Kotter International, says hiring McKinsey was the right move. “Being attacked by these activist investors, they are looking for objective criteria from outside,” he says.

Leppert notes that Dow and DuPont managers have been refreshingly forthcoming with information about what they want to do after the deal. “With mergers of this size and complexity, it is not always that the plan going forward is laid out,” he notes.

Before the split, DowDuPont will have to achieve a lot of cost savings it has promised investors. Management expects $4 billion in annual synergies between the firms. Three-quarters of this is to come from cost-cutting and another $1 billion from new growth. These savings are in addition to ongoing cost-cutting programs at both companies.

People
Doyle is out, Breen is in at DuPont
Specialty Chemicals
DuPont execs outline strategy﻿ for independence next year
Investment
DowDuPont names new leaders for DuPont, Corteva
Share X
To send an e-mail to multiple recipients, separate e-mail addresses with a comma, semicolon, or both.
Title: Drumroll please ... DowDuPont emerges
Author: Alexander H. Tullo
Chemical & Engineering News will not share your email address with any other person or company.