Over the past 40 years, electroactive polymers have found their way into electronics such as transistors, batteries, light-emitting diodes, and solar cells. Built from conjugated building blocks, these materials exhibit conducting or semiconducting properties, the ability to reversibly change color when oxidized and reduced, and in some cases luminescence that can be toggled on and off. Notable examples include polyacetylene, polyaniline, polythiophene, and poly(p-phenylene vinylene).

Chemists and materials scientists working with these materials have lately been branching out from the conventional monomer building blocks by creating new, more exotic monomers. These molecules contain multiple fused rings in assorted combinations, heteroatoms including metals, and customized side-chain functional groups that help expand on the already useful properties of the polymeric materials.

Three researchers working in this area thought it was high time to have a gathering to feature the growing collection of these nonconventional building blocks and discuss how developing more of them will help lead to the next generation of optical and electronic materials for smart sensors, handheld gadgets, colorful fabrics, electric cars, and wearable electronics.

[+]Enlarge
These well-established polymers are among those used to make a variety of electronic and optical materials. 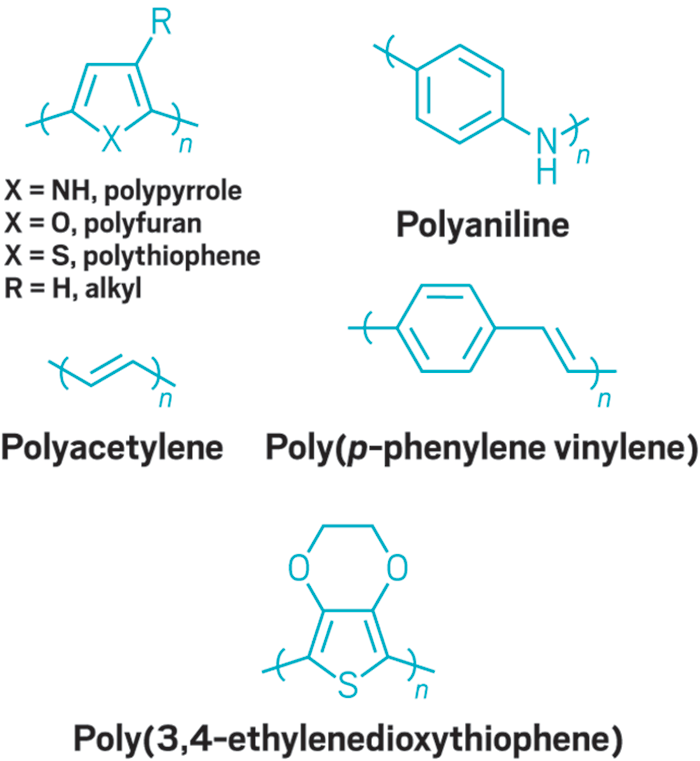 These well-established polymers are among those used to make a variety of electronic and optical materials.

To that end, Frieder Jäkle and Agostino Pietrangelo of Rutgers University and Kevin J. T. Noonan of Carnegie Mellon University joined forces to organize a symposium on the veritable zoo of nonconventional building blocks that are now available. The event was cosponsored by the Divisions of Polymer Chemistry, Inorganic Chemistry, and Polymeric Materials: Science & Engineering at the ACS national meeting held in Washington, D.C., last month.

“We didn’t just want to have another symposium on polythiophene, polyphenylene, and the usual suspects,” Jäkle told C&EN. “Many of us working in different areas of organic and inorganic synthesis and the development of hybrid metal and main-group polymeric materials wanted to get together to explore this new nonconventional trend.”

Pietrangelo added that the goal in focusing on the building blocks was to provide a platform for the speakers to discuss the rationale behind their novel molecular designs without feeling obligated to stress electronic device development and performance. “In this way, bold and fresh ideas could be shared to gain new perspectives on what the next generation of conjugated materials will look like,” Pietrangelo said.

“Chemists are fascinated by perturbations in conjugated architectures that in turn impact physical and electronic properties,” Noonan pointed out. “Trying to utilize a wider portion of the periodic table to manipulate π electron frameworks offers opportunities for exciting new discoveries. We thought bringing people together would inspire additional new directions in the field.”

The organizers planned the symposium around two complementary approaches used to design new monomers. One approach is elaborating on the structures and bonding patterns of traditional hydrocarbon-based monomers to alter aromatic and/or multiple-bond stabilization in the polymer backbone and enhance conductivity or luminescence. This approach includes “side-chain engineering” to expand the variety of substituent groups attached to the polymer chain. These additions can make polymers soluble and can facilitate polymer chain stacking in the solid state.

The second approach is introducing main-group elements into the building blocks, in particular boron, silicon, germanium, phosphorus, and selenium. These elements are variously electron deficient or electron rich relative to carbon. As such, they make possible interactions between empty p or antibonding orbitals and π systems, which can tailor the electronic structure of conjugated polymers. Both design approaches require that researchers develop new chemical methods to synthesize the building blocks and to polymerize them.

Jäkle’s group has been working on tuning the electronic structures of polymers by incorporating boron into the backbone of polythiophene-based polymers. The electron-deficient character of boron enables Lewis acid-base interactions that chemists can exploit when designing optical sensors and other organic electronics, Jäkle explained. For example, “boron doped” hybrid materials light up when fluoride ions bind to the boron atoms. That makes the materials good sensors to monitor safe levels of fluoride added to drinking water to protect teeth and optimal levels of fluoride in blood, which is important for treating osteoporosis.

Pietrangelo described new types of cyclopentadiene-based copolymers that use a simple nonaromatic building block to integrate the desirable conjugation lengths typical of polyacetylene with the desirable stability, processability, and flexibility typical of aromatics such as polythiophene. The end goal, Pietrangelo noted, is to develop thermally stable, solution-processable polymers for optoelectronic applications. One example, a cyclopentadiene-thiophene-diketopyrrolopyrrole copolymer, prepared by Pietrangelo in collaboration with Martin Heeney of Imperial College London, another of the symposium’s speakers, was designed with an eye toward making organic thin-film transistors. 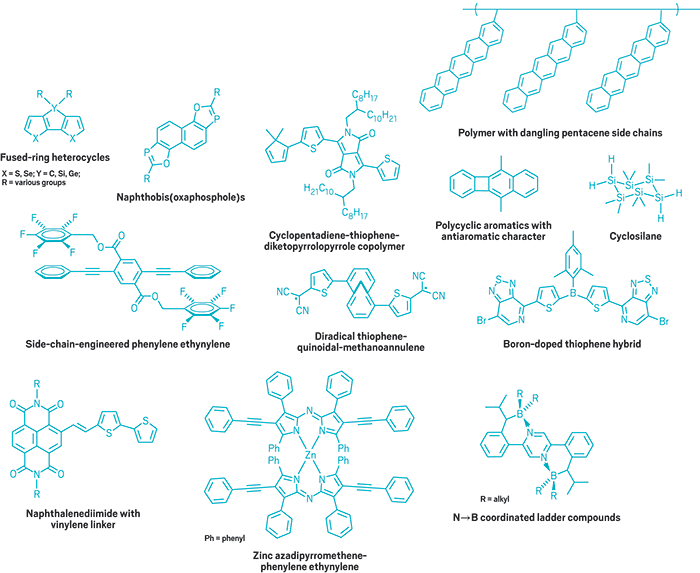 This parade of polymer building blocks represents a selection of molecules being developed to expand the properties of electronic and optical materials.

Noonan’s group is designing new polyfurans and polymers that include furan in the polymer backbone. Furan is an attractive heterocycle because it has good solubility and chemists can produce it from plant sugars, Noonan noted. Plus, polymers made from furans have the potential to be biodegradable. Noonan’s team has focused on optimizing the side-chain substituents on the furan rings­—for example, using ester groups that help control polymer conformation to improve structural stability and photostability. His group is further making furan copolymers with thiophene that elongate the monomer units. These perturbations of the main polymer chain and side chain have required developing a method to add ester groups to the monomer and a nickel-catalyzed Suzuki polycondensation reaction to prepare the polymers.

Among the other 40 speakers at the ACS symposium, Rebekka S. Klausen of Johns Hopkins University discussed how her group drew inspiration from the chair-shaped cyclohexasilane moieties embedded within the extended framework of crystalline silicon, commonly used to make semiconductors, to construct poly(cyclosilanes). Klausen described how her group synthesized a cyclosilane monomer, which is an all-silicon analog of cyclohexane, and used the difference in reactivity between methyl and hydrogen substituents on the silicon atoms in the ring to carry out polymerization.

“The approach of using cyclosilanes is just very different from anything done previously,” Jäkle commented. Klausen’s team has further developed a method to functionalize the silicon atoms after polymerization to dope the polymers with boron and phosphorus. “We keep being surprised by the properties of the molecules we are making,” Klausen said.

In another example of chemists replacing carbon in monomers, John D. Protasiewicz of Case Western Reserve University has been preparing π-conjugated multiring scaffolds bearing P=C double bonds known as benzoxaphospholes. “We want to replace carbon atoms, maybe all of them, with other elements,” Protasiewicz said. He explained that P=C bonds like those in benzoxaphospholes can mimic C=C bonds—phosphorus is coming to be known among chemists as a “carbon copy,” he pointed out. A bonus is that the P=C bonds can lower the energy of the lowest unoccupied molecular orbital of the molecules to alter their electronic properties. Protasiewicz’s team has shown these compounds have a high degree of luminescence. In related work presented at the symposium, Thomas Baumgartner of York University described modifying viologens to make phosphole derivatives. Viologens are bipyridine compounds often used to build electrochromic properties into polymeric materials.

Yew Chin Teo, a graduate student in Yan Xia’s research group at Stanford University, described some of her dissertation work on developing reactions to incorporate antiaromatic cyclobutadiene units into conjugated ring scaffolds. Chemists are interested in juicing up conjugated polymer systems with antiaromatic rings, which have higher energy than aromatic rings, to alter the polymer’s electronic properties. But the synthesis of these types of polymer building blocks has been challenging and limited because antiaromatic systems are relatively unstable and they tend to break up the conjugation of polymer chains, Teo said. Teo and her lab mates took on the challenge and crafted a palladium-catalyzed annulation reaction of aryl bromides and oxanorbornenes, leading to new cyclobutadiene-based building blocks.

Samuel W. Thomas III of Tufts University has been using side-chain engineering to manipulate the conformation of polymers, which in turn adjusts the resulting materials’ optical properties. His group does this by designing materials with noncovalent interactions between different aromatic groups in the polymer backbone and side chains. In one polymer system the Thomas group has made, the polarity of the aromatic rings in phenylene-ethynylene oligomers is opposite that of pentafluorophenyl groups located on polymer side chains. That difference causes the polymer chain to twist so the phenyl groups align, which modifies the phenylene-ethynylene’s luminescence. In effect, the mechanical force of the twisting controls luminescence, a phenomenon Thomas calls mechanosensitized luminescence. “Very small changes in structure can give us vastly different changes in optical properties, such as color in solids,” Thomas said.

The ultimate goal for all the chemistry presented last month, Jäkle observed, is finding efficient routes to incorporate these nonconventional building blocks into polymeric structures in a controlled fashion and then seeing how the materials can be used in new applications. “There has just been tremendous progress in doing that over the past few years,” Jäkle said. “I think further developments in the field of conjugated materials and their applications will ultimately be fueled by continuing to come up with new and radically different designs of the building blocks.”