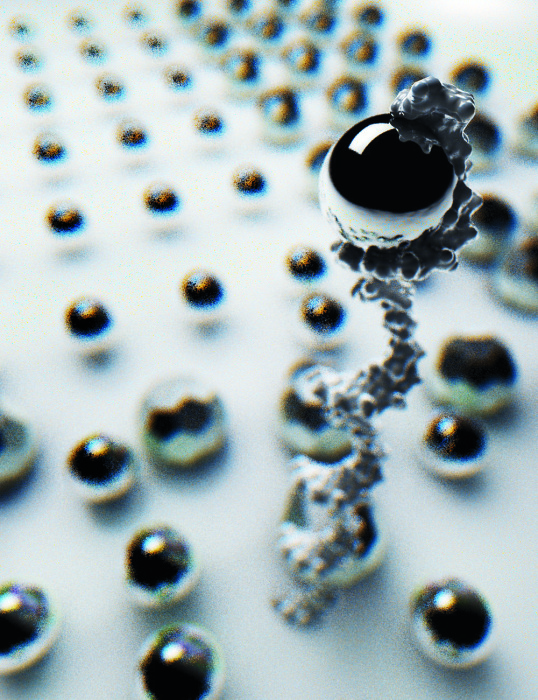 To deliver a package, we usually enlist the help of a postal or parcel service, which accepts the cargo, sorts it, and sees that it gets safely to its designated destination. This task becomes quite complicated in the molecular world, where our methods of manipulation are still fairly rudimentary. Now, with a single strand of DNA just 53 nucleotides long, scientists at Caltech have created a robot that picks up molecular cargo, sorts it, and delivers it to a predetermined location.

The DNA robot, developed by Lulu Qian, Anupama J. Thubagere, and colleagues, features an arm with a hand to carry cargo and a central leg with two feet that wander a DNA track studded with pegs of single-stranded DNA. The feet anchor to the track one at a time as they bind to complementary nucleotides in the pegs. When the robot encounters cargo—in this case, a fluorescent molecule covalently linked to a short single strand of DNA—it picks the cargo up and carries it until reaching a single strand of DNA on the track that’s designed to snatch the cargo from the robot (Science 2017, DOI: 10.1126/science.aan6558).

Qian and Thubagere’s team used two types of cargo, one bit of DNA with a yellow fluorescent dye and one with a pink fluorescent dye, to demonstrate the robot could sort the two. One robot working alone on a surface was able to sort six molecules of cargo in about a day. When the team used multiple robots at once, they were able to speed up the process.

“What’s novel about this system is that it has a design that allows for an army of robots to operate independently,” comments John H. Reif, an expert in DNA robots at Duke University. “The design of the whole system is incredibly elegant and simple.”

Applications in chemical synthesis and drug delivery exist, but they’re a long way off, Qian says. “The point of this work is toward understanding the engineering principles for building general-purpose DNA robots rather than how to use them for specific applications,” she says.