[+]Enlarge
Credit: David Scharf/Science Source
In mothers, gut microbes such as the ones shown here could influence the neurodevelopment of offspring. Magnification is 26,500x. 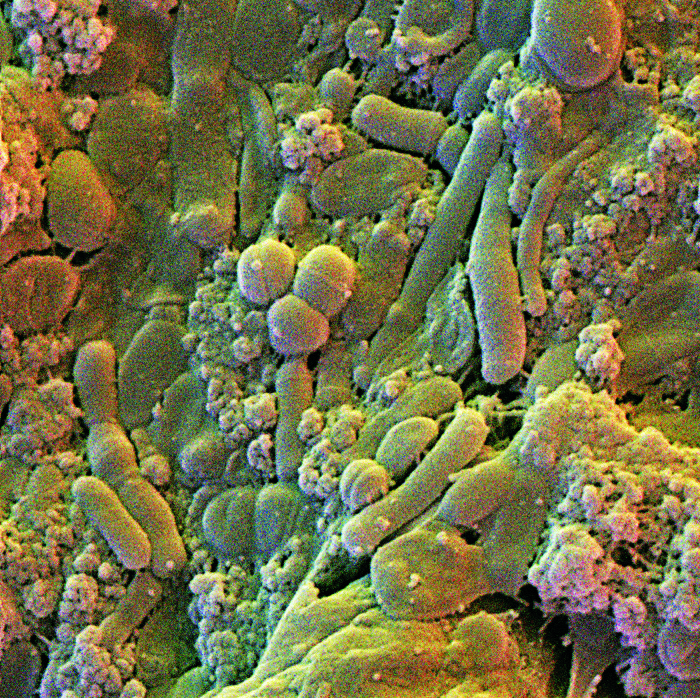 Credit: David Scharf/Science Source
In mothers, gut microbes such as the ones shown here could influence the neurodevelopment of offspring. Magnification is 26,500x.

We share our bodies with a microbial zoo. For every human cell in our bodies, there is about one bacterial cell, according to some estimates. And scientists continue to find ways in which the biology of these microorganisms influences our own.

Now, in a pair of papers that could provide insight into the mechanisms behind autism, researchers report that the presence of certain bacteria in the guts of pregnant mice promotes abnormal brain development in their offspring. These affected animals display behaviors that resemble those seen in people with autism spectrum disorders.

Neuroscientists have long noticed a correlation between viral infections in pregnant women and an increased likelihood their children will develop autism, schizophrenia, and other neurodevelopmental disorders. Scientists have replicated this connection in mice. Scientists can simulate a viral infection in pregnant mice by injecting the animals with a synthetic double-stranded RNA called poly(I:C), which resembles the genetic material of some viruses. The offspring of mice receiving poly(I:C) exhibit abnormal social and repetitive behaviors, such as ignoring new cage mates and repeatedly digging.

Gloria B. Choi of the Massachusetts Institute of Technology and Jun R. Huh of the University of Massachusetts Medical School have been studying this phenomenon in mice. In a previous study, the team found that a certain type of immune cell called a T helper 17 (TH17) cell was involved. The normal role of these cells is to fight off invading bacteria and fungi.

In one of the new papers, Huh and Choi report that the mothers produce these cells only when there are segmented filamentous bacteria in their guts (Nature 2017, DOI: 10.1038/nature23910). For example, pregnant mice treated with the antibiotic vancomycin lacked these microbes in their intestines, had few TH17 cells, and did not produce abnormally behaving offspring when injected with poly(I:C).

Huh, currently at Harvard Medical School, says that these microbes trigger the animals’ immune systems to produce TH17 cells. The poly(I:C) then stimulates the cells to release an immune-signaling molecule that somehow causes abnormal brain development in the fetuses.

The second paper from Choi and Huh pinpoints the part of the offsprings’ brains that develops incorrectly (Nature 2017, DOI: 10.1038/nature23909). This brain region, which is part of the somatosensory cortex, “tells an animal where its body parts are and how their positions change as a result of movement,” Choi says.

The team found that affected mice had increased neuronal activity in this region. When the scientists used a technique to decrease the firing of neurons in the area, the animals’ behavior became more normal. Meanwhile, when the team used the same technique in normal mice to increase this region’s activity, the animals started to display abnormal behaviors seen in affected mice.

To determine if gut microbes have a similar effect on neurodevelopment in people, Huh thinks scientists need to study pregnant women before and after they give birth. Such an analysis could correlate the composition of the women’s gut flora and activity of their immune systems while pregnant with the likelihood their children develop autism or other disorders.

If such a connection is found in people, researchers could investigate ways to reduce the risk of improper neurodevelopment by tweaking the composition of pregnant women’s gut flora, writes Craig M. Powell of the University of Texas Southwestern Medical Center in a perspective accompanying the two papers. But even if no such connection exists in people, Powell continues, “these papers still provide valuable insights by revealing the complexity of the interactions between gut bacteria, the immune system, and brain development.”

Biological Chemistry
Social behavior may have immune connection
Biological Chemistry
Broccoli Compound Improves Autism Symptoms
Biological Chemistry
Gene Deletion Linked To Autism In Mice
Share X
To send an e-mail to multiple recipients, separate e-mail addresses with a comma, semicolon, or both.
Title: Mother’s gut microbes could be linked to autismlike disorders in children
Author: Michael Torrice
Chemical & Engineering News will not share your email address with any other person or company.

Comments
Karen (September 23, 2017 3:39 PM)
Were the mice born immediately showing autistic-like behaviors or did they see a development of autistic-like behaviors over time? Did they say when they injected the pregnant mouse with the simulated virus, that the fetus were not at the same time infected also because whatever the mother is infected with, aren't their fetuses infected as well? Did they check the gut of the fetuses as well if it had the same bad bacteria?
Reply »

Previous reports of this phenomenon with poly(I:C) have looked at ultrasonic squeaks from the pups of "infected" mothers. All pups make them--they're the mouse equivalent of "Mom, where are you?!" But the pups of "infected" mothers make more of them, suggesting there are differences in social behavior early on. But the tests of social interactions and repetitive behaviors are done later in the animals' lives when they are mobile.

I don't have a good idea of when the poly(I:C) injections have to occur to see the effect, but remember poly(I:C) isn't an actual virus. So the mothers aren't really infected with anything. Their immune systems just think they are and fire up defensive pathways because of that. So the scientists think that there are some immune molecules released in that process that cross from the mother to the fetus and somehow disrupt normal brain development.

I didn't see any mention of checking the guts of the pups once they were born.