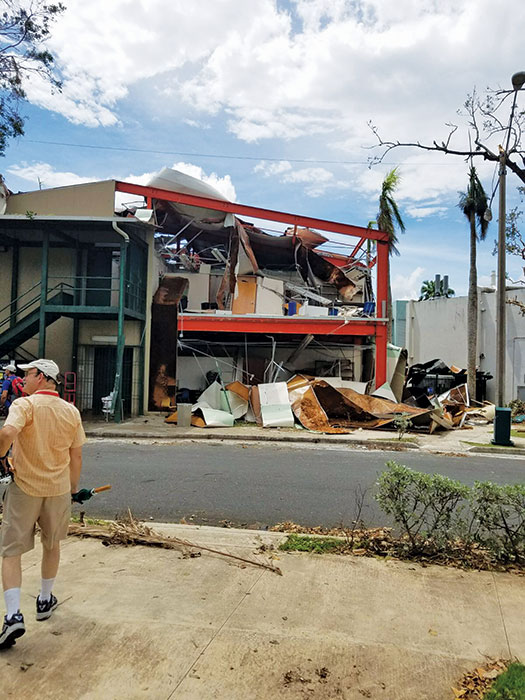 The timeline for recovery of Puerto Rico’s chemistry enterprise, including pharmaceutical manufacturing facilities and universities, is highly uncertain as millions of people on the hurricane-devastated island remain without running water and electricity.

The scale of destruction from Hurricane Maria, which slammed into Puerto Rico on Sept. 20 as a category 4 storm, is enormous, with relief efforts struggling to address the humanitarian crisis as of C&EN’s deadline.

Twelve of the top 20 global pharmaceutical companies have facilities in Puerto Rico, according to an archive saved in March of the website of the Puerto Rico Industrial Development Company, a government-owned corporation focused on economic development on the island. The website has been off-line since the storm.

Products produced in Puerto Rico include “cancer drugs, immunosuppressants used by transplant patients, and devices needed for people with diabetes,” U.S. Food & Drug Administration Commissioner Scott Gottlieb said in a Sept. 25 statement. “These are products that are used daily in hospitals, outpatient clinics, and homes.”

To ensure that critical life-saving drugs remain available to residents on the island as well as to the rest of the U.S., FDA is working with pharmaceutical and medical device companies in Puerto Rico to evaluate damage to manufacturing facilities. Such work includes “clearing debris to reach facilities; assessing fuel needs to keep generators running; and securing permissions to allow planes to land in Puerto Rico and fly critical products to the continental U.S.,” Gottlieb said.

Amgen and Eli Lilly & Co., both of which have manufacturing facilities on the island, told C&EN that only small teams stayed on the companies’ sites during the storm while the rest went home. The companies were working to assess the status of all employees as of C&EN’s deadline.

A worry for Carballeira was how to maintain some of the chemistry department’s instrumentation. “We need liquid nitrogen and helium,” he said. “We shut the instruments down, but they still need some cryogens.”

The department won’t know the conditions of infrastructure like the air systems and fume hoods until full power is restored, he noted.

Carballeira added that the campus’s biology facilities flooded and lost their generator, so researchers moved cell lines and other samples to other buildings. He did not know the status of other UPR campuses.

When Carballeira spoke with C&EN on Sept. 27, he had been able to keep his phone charged thanks to a generator at his condominium building, which is made of concrete and survived the storm intact. However, he noted that fuel supplies were getting tight. The condo building got its water supply back two days after the storm, but using power to pump water up beyond the first floor was becoming a concern.