Enzymes often elicit envy from organic chemists. Highly evolved by nature, these biocatalysts can carry out reactions with a selectivity that surpasses most synthetic catalysts. Yet they act on such a narrow range of substrates that chemists haven’t been able to exploit their abilities in a general way.

In an effort to broaden enzymes’ reach, researchers led by Alison Narayan at the University of Michigan explored how three known enzymes—called TropB, AzaH, and SorbC—carry out the same reaction (Nat. Chem. 2017, DOI: 10.1038/nchem.2879). 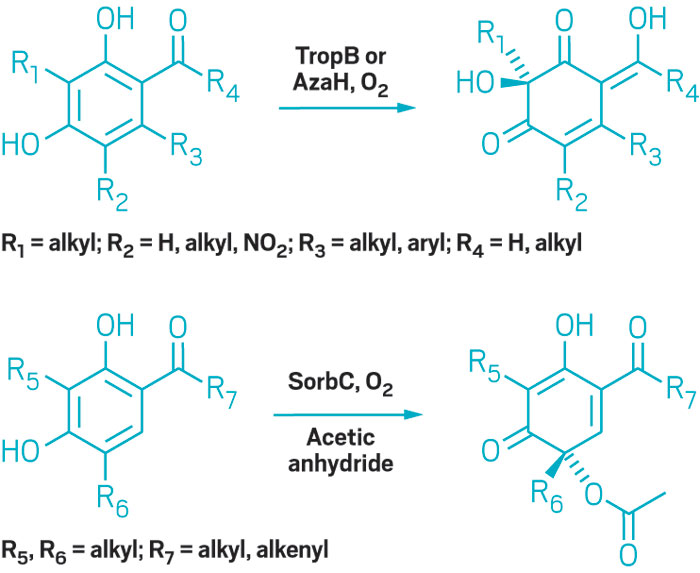 A sampling of the oxidative dearomatization products obtained by Narayan and coworkers from the enzyme trio TropB, AzaH, and SorbC.

In the reaction, known as an oxidative dearomatization, a catalyst breaks the aromaticity of a planar ring system to install an oxygen species, forming a valuable chiral building block. Narayan and her team determined which of the three enzymes worked best with which substrates from a group, allowing them to maximize the reaction’s enantioselectivity and site selectivity and enabling the chemists to target specific positions and geometries around the ring.

Previous catalytic synthetic methods for oxidative dearomatizations have struggled to achieve high selectivity, often wasting chiral oxidants like hypervalent iodine reagents and metal complexes in the process. The enzyme-driven reaction, on the other hand, uses a more atom-economical reagent, molecular oxygen. Under the conditions needed for synthetic oxidative dearomatizations, products can undergo undesirable side reactions, whereas under the enzymes’ biological reaction conditions, products are stable, Narayan says.

By using freeze-dried cells, which lasted in a freezer for six months without the enzymes inside losing reactivity, the researchers could also run the enzyme reactions at a scale that’s practical for synthetic chemists.

“This is a great example of how enzymes can effect difficult transformations in chemical synthesis,” says Frances H. Arnold, a biosynthesis pioneer at California Institute of Technology. “Starting from newly-discovered enzyme activities, Narayan and coworkers leveraged nature’s diversity to assemble and demonstrate a versatile platform for site- and stereoselective oxidative dearomatization, all the way to the gram scale.”

The team plans to further probe the enzymes’ chemistry with an eye toward eventually engineering the biocatalysts for a broader range of reactions.