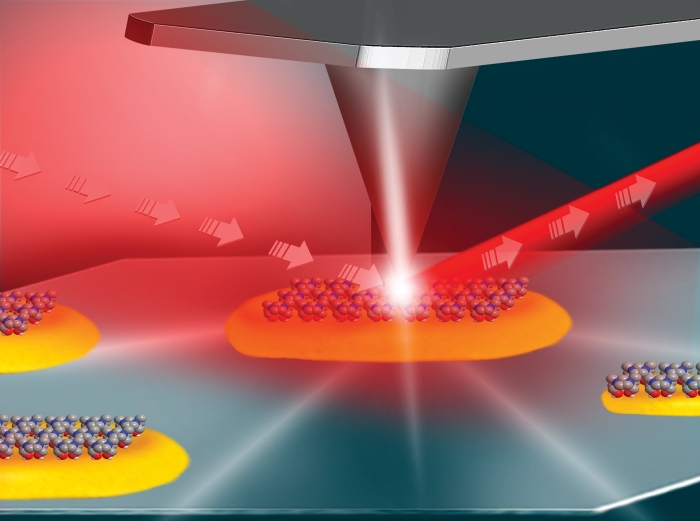 Credit: Elad Gross/Hebrew U
Like an optical antenna, a Pt-Si probe tip confines the spectral signal in a measurement made with synchrotron-based infrared light (arrows) to a nanosized spot. The setup enables high-resolution analysis of organic molecules reacting on Pt nanocatalysts (yellow).

More than 30 years after achieving atomic resolution with scanning probe microscopes, scientists remain endlessly fascinated with the ability to “see” and study individual atoms and molecules. For years, that fascination drove researchers to devise clever ways to use these tools to do more than just record high-resolution images. They came up with numerous methods to manipulate molecules one at a time and measure chemical spectra and other properties of individual molecules.

That innovation shows no sign of slowing down. In the past few months, scientists have demonstrated new ways to couple scanning tunneling microscopes (STMs) and atomic force microscopes (AFMs) with powerful tools for spectroscopy and electrochemical analysis. They’ve also come up with novel ways of improving AFMs’ and STMs’ key sensor element—a microscopic probe tip, which may be made from various metals, silicon, and other materials, depending on the application. Researchers have also developed theoretical tools that underpin data interpretation. Collectively, these advances have boosted the spatial resolution of spectroscopic techniques and deepened understanding of reactions on catalyst and electrode surfaces.

STMs and AFMs analyze materials by raster scanning their microscopically sharp probe tips across specimen surfaces with atomic-scale precision. By measuring tiny currents that flow, or tunnel, between the tip and specimen—and that vary on the atomic scale—STMs can “see” individual atoms and molecules. AFMs can also resolve atoms and molecules, but they do so by measuring microscopic forces that indicate atom positions.

One new way that researchers have used those probe tips is to enhance the interrogative power of synchrotron light. The intense radiation of synchrotrons enables researchers to deduce the chemical composition, structure, and electronic and other properties of specimens spanning the entire range of materials science. Combining that tunable, coherent light source with scanning probe methods provides scientists with a way to zoom in and characterize a nanosized region instead of averaging properties over a larger swath of a surface.

The method works because the AFM or STM tip functions like an antenna. It confines the area being investigated from one covered by a relatively large (micrometer-sized) synchrotron beam to a spot with just nanometer dimensions.

Elad Gross of Hebrew University of Jerusalem exploited that trick to pinpoint catalytic hot spots on platinum nanoparticles. Gross’s group recently teamed up with F. Dean Toste of the University of California, Berkeley, and coworkers to analyze industrial-type catalytic nanoparticles and figure out where exactly the action occurs. That information is key to understanding catalytic reaction mechanisms and strategies for improving catalyst performance. 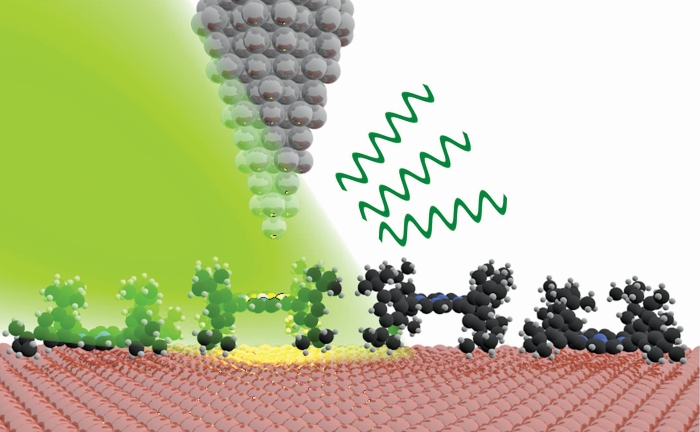 Credit: Nano Lett.
Coupling Raman spectroscopy (green laser light, left) with an STM tip (silver spheres) yields spectral signals (squiggles) that can distinguish the conformations of porphyrins adsorbed on a metal surface (from left: bowl down, bowl up, bowl up, bowl down).

The team anchored N-heterocyclic carbenes (NHCs) on platinum particles. Then, as they exposed the NHCs alternately to oxidizing and reducing conditions, they monitored reversible platinum-catalyst-driven reactions in these reporter molecules by using a platinum-silicon AFM tip to selectively sense the effects of infrared light absorption in a spot with a 25-nm diameter.

By scanning the tip across the particles, the team showed that particle edges, which contain undercoordinated metal atoms—atoms with fewer than the energetically optimal number of neighbors—are far more active than the particles’ flat, fully coordinated regions (Nature 2017, DOI: 10.1038/nature20795). The findings experimentally confirm long-held assumptions about site-to-site variations in catalytic activity, Gross says, and they demonstrate a widely applicable way to study these phenomena.

Northwestern University’s Richard P. Van Duyne also exploits the benefits of using a probe tip as an antenna. For decades, the laser spectroscopist has worked to broaden Raman spectroscopy’s analytical reach. Lately, his group has been toiling to focus the technique on one molecule at a time. They do so through a method called tip-enhanced Raman spectroscopy (TERS), in which Raman signals are greatly enhanced only in the immediate vicinity of the apex of a nanosized tip.

In a just-published study of this type, Van Duyne and coworkers carried out AFM-TERS measurements on Nile Blue dye molecules undergoing redox reactions in an electrochemical cell. The study demonstrates the feasibility of monitoring single-molecule electrochemical reactions in solution. It also shows that like other catalytic surfaces, electrodes exhibit site-to-site variations in activity on the nanoscale (Nano Lett. 2017, DOI: 10.1021/acs.nanolett.6b04868). This type of information pushes the limits of understanding in areas such as electrocatalysis, energy storage, and biological electron transfer.

In a related study, a team led by Van Duyne shows that STM-based TERS is sensitive enough to pick out the difference in the conformations of a pair of neighboring molecules adsorbed on a metal surface (Nano Lett. 2016, DOI: 10.1021/acs.nanolett.6b03958).

[+]Enlarge
Credit: Wilson Ho & Zhumin Han/UC Irvine
The close proximity of two CO molecules (black and red)—one on an STM tip and one on a surface—induces vibrations in both. As the molecules move in opposite directions, the oxygen atoms move more than the carbon atoms (arrows).

Credit: Wilson Ho & Zhumin Han/UC Irvine
The close proximity of two CO molecules (black and red)—one on an STM tip and one on a surface—induces vibrations in both. As the molecules move in opposite directions, the oxygen atoms move more than the carbon atoms (arrows).

The researchers deposited bowl-shaped meso-tetrakis(3,5-di­tertiary­butyl­phenyl)-porphyrin on the surface of a copper crystal held under vacuum. At room temperature, the bowl-shaped porphyrin molecules slowly interconvert between bowl-up and bowl-down conformations. By scanning the surface and simultaneously measuring TERS and STM signals, the researchers were able to distinguish one bowl-up porphyrin from its bowl-down neighbor. The wavelength of the green laser light used for Raman excitation was 561 nm. But because of the tip-induced focusing effect, which bypasses the resolution limit imposed by the wavelength, the lateral resolution worked out to be 2.6 Å, a record for optical techniques.

Access to that level of detail should benefit scientists studying molecular self-assembly and those who build electronic devices for which performance hinges on single molecules.

Using probe tips as antennae for spectroscopy isn’t the only way researchers have been advancing scanning probe methods. Many scientists have been modifying the electronic properties of probe tips through custom fabrication and chemical functionalization. These modifications allow researchers to probe new phenomena on surfaces.

For example, Wilson Ho of the University of California, Irvine, and coworkers prepared a silver STM tip through electrochemical etching, ion sputtering, and heat treatment, then capped it with a CO molecule. The team used the tip to probe the coupled vibrations between two CO molecules: the one on the tip and one on a silver surface (Phys. Rev. Lett. 2017, DOI: 10.1103/physrevlett.118.036801).

The study, which uncovered novel modes of intermolecular vibrations, marked the first time researchers had measured coupled vibrations of a single pair of molecules. This kind of molecular group dance can alter vibrations within individual molecules and influence chemical reactivity.

Twenty years ago, we dreamed of getting these kinds of results and thought of it as science fiction.

A group at the University of Alberta, Edmonton, including Taleana Huff and Robert A. Wolkow, has used one of these customized probe tips to address a question that has been bouncing around the scanning probe community. In the past few years, several research groups have published images that not only resolve atoms in individual molecules but also show features that appear to be bonds connecting those atoms. Debate has been hot over the meaning of those bondlike features and the factors that cause them to appear.

Aiming to clarify some of the unsettled issues, Wolkow’s group used a multistep procedure to prepare a sharp tungsten tip decorated with silicon and capped with a few hydrogen atoms. They then employed that tip to examine a hydrogen-capped silicon crystal in a combined AFM-STM study. The silicon system, which may underpin future quantum computing logic devices, is quite unlike the organic-molecule-on-metal surfaces analyzed in nearly all previous bonding studies. In this case, Wolkow’s team has extended the bond imaging discussion to semiconductor materials.

Earlier this month, Wolkow’s group reported how the images of the silicon surface change as the team moves the scanning tip within angstroms of the surface. With the tip held a certain distance above the crystal, the most prominent image features are bright spots, which correspond to the topmost Si atoms. But as the tip closes in on the surface a fraction of an angstrom per step, the bright spots give way to what appear to be Si–Si covalent bonds.

The team turned to a so-called tight-binding quantum method to analyze the images. The method faithfully simulates the experimental results, allowing the team to cautiously conclude that they have indeed imaged covalent bonds. The calculations indicate that bond images obtained in the experiments may be explained by properties of the tips involved, the silicon atoms, as well as σ bonds that connect the atoms. The computational analysis also shows that bond images do not result from other proposed artifacts, including a type of interference from hydrogen (Nat. Commun. 2017, DOI: 10.1038/ncomms14222).

Wolkow’s work and that of others demonstrate that long after scanning probe microscopes were commercialized, researchers continue to come up with original ways to use them, often coupling them with other tools, Swiss-army-knife style.

That approach has led to truly remarkable results, Van Duyne says. The almost routine way in which scientists now conduct single-molecule and other ultra-high-resolution investigations leads him to reflect on an earlier part of his career.

“Twenty years ago, we dreamed of getting these kinds of results and thought of it as science fiction,” Van Duyne says. “Now, here it is. It’s pretty amazing.”