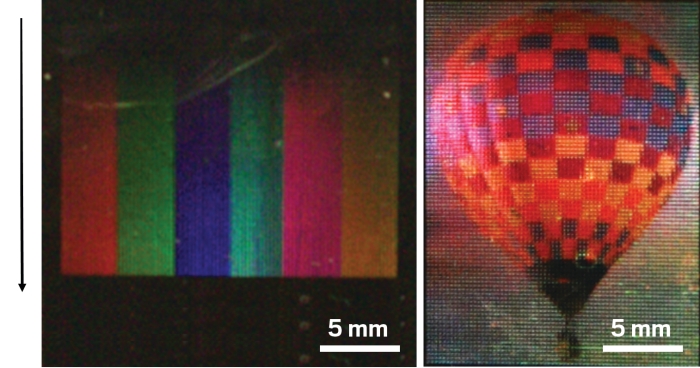 Credit: ACS Nano
Coating nanostructured patterns with silver nanoparticles creates a spectrum of colors. By increasing the number of nanoparticles per pixel (left, top to bottom), researchers can turn up the brightness.

Ink containing silver nanoparticles is widely used to print flexible surfaces with electronic circuits, which turn out to be colorless. Now, researchers have found that printing this silver ink on a polymer sheet carrying nanoscale patterns can generate iridescent colors (ACS Nano 2016, DOI: 10.1021/acsnano.6b06531). The colorful polymer sheets could be used as security stamps to authenticate currency notes, passports, and other documents.

The colors come from the way silver deposited on the patterns interferes with specific wavelengths of light. These so-called structural colors—which depend on the physical shape of nanostructures—are more durable and fade-resistant than pigments. But methods used to make them—such as photolithography, thin-film deposition, or laser printing—are usually expensive and slow, making it difficult to produce patterns over larger surfaces.

Inkjet printing, however, is a fast, cheap way to deposit silver nanoparticle ink over large areas. Compared to other technologies, “inkjet printing is the simplest in terms of speed, cost, resolution, and other properties we can control such as brightness,” says lead study author Hao Jiang of Simon Fraser University.

Jiang and his colleagues began by pressing a pattern of raised cone shapes—approximately 750 nm high and 520 nm wide at the base—into transparent sheets of plastic. Then, they used an ink-jet printer to cover the sheets with an alcohol-based ink carrying 50-nm-diameter silver nanoparticles, creating 100- to 300-nm-thick layers of silver on the polymer. Small differences in the cones’ shape and spacing resulted in red, green, or blue color.

Like with a computer screen, combining separate pixels of the three colors in different proportions produced a full spectrum of colors. The brightness can be varied by depositing more or fewer nanoparticles per pixel.

The resulting hues are strongly iridescent, changing depending on the angle from which they’re viewed. Such properties are particularly useful for making optical security markings for documents, Jiang says.

Credit: ACS Nano
Varying the shape and spacing of nanosized cones stamped into a polymer yields red, green, or blue colors when they’re coated with a silver nanoparticle ink.

Nanomaterials
Engineered metasurface points toward combination 2-D and 3-D color displays
Materials
Stretchy material creates dynamic holograms
Materials
Stretchy holograms made from a metamaterial
Share X
To send an e-mail to multiple recipients, separate e-mail addresses with a comma, semicolon, or both.
Title: Printing silver ink creates a spectrum of structural colors
Author: Jyoti Madhusoodanan
Chemical & Engineering News will not share your email address with any other person or company.

Comments
nisa thomas (January 19, 2017 12:17 AM)
it is really useful for young researchers who are interested in nano technology.
Reply »