Drug prices, the approval process, and manufacturing jobs were the focus 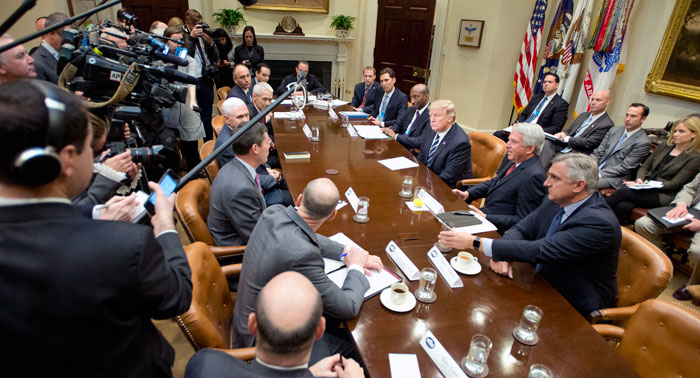 Although Trump’s public commentary touched on the hot button issue of drug prices, much of it focused on the time it takes to get a new drug onto the market.

Trump proposed streamlining the process “so that, if it works, you can actually get it approved instead of waiting for many, many years.”

However, the notion that drugs should be approved without sufficient data on their efficacy and safety has many industry experts concerned about the impact on patients. “Even sick patients deserve drugs that have some hope of working and that won’t make them die sooner,” said Aaron Kesselheim, an associate professor at Harvard Medical School. “We need to gather data on those parameters as part of a drug evaluation process.”

Kesselheim, an expert in pharmacoeconomics, noted that the Food & Drug Administration is already the fastest drug regulatory agency in the world. “The reason that drugs can take years to be evaluated is because we are gaining evidence on their efficacy and safety,” he said. “Without that evidence, we wouldn’t know how to use these drugs.”

Kesselheim also pointed out that FDA approves more than 99% of the applications it receives under its “expanded access” program, which allows a patient with a serious or life-threatening illness to petition to be given a drug that is still in clinical trials.

In his public comments at the meeting, Trump also focused on the high cost of medicines and the need to increase drug industry jobs domestically. “We have to get lower prices, we have to get even better innovation … and I want you to manufacture in the U.S.,” he told the executives. To encourage that shift, “we’re going to be lowering taxes … we’re going to be getting rid of regulations that are unnecessary.”

PhRMA put out a statement summarizing what was discussed after the public portion of the meeting. “We discussed many areas of common ground, including advancing stronger trade agreements to level the playing field with countries around the world, reforming our tax code to spur investment and job creation here in the U.S., and removing outdated regulations that drive up costs and slow innovation.”

In the statement, PhRMA CEO Steve Ubl said, “We believe if these policies are enacted, it will translate to up to 350,000 new jobs over the next 10 years as a result of growth in the biopharmaceutical industry.”

Comments
Wolfgang K.- D. Brill ( Ph.D. medicinal chemist) (February 3, 2017 10:15 AM)
The pharmaceutical in industry is well advised to approve only drugs after having obtained sufficient data. Primature approval of a drug called Contergan in the 1960s led to many people having severe disabilities.
Reply »