[+]Enlarge
Credit: Bioconjugate Chem.
Aggregates of amphotericin B (AmB, blue), can penetrate the membranes of mammalian cells (top), killing them along with the fungal cells they are supposed to target. When conjugated to cholic acid (brown), they are held aloft and do not puncture the membrane (bottom). 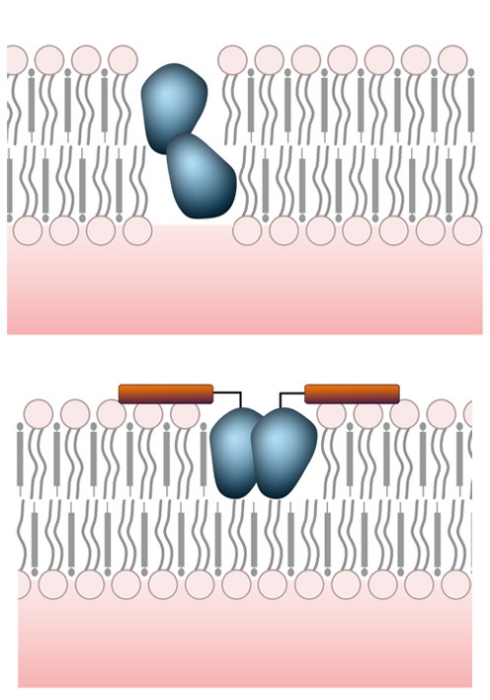 Credit: Bioconjugate Chem.
Aggregates of amphotericin B (AmB, blue), can penetrate the membranes of mammalian cells (top), killing them along with the fungal cells they are supposed to target. When conjugated to cholic acid (brown), they are held aloft and do not puncture the membrane (bottom).

Some antifungal medications can’t distinguish between a fungus and us, leading to potentially serious side effects. For certain systemic infections, amphotericin B (AmB) is the only effective antifungal agent available, but it’s also one of the most toxic drugs in clinical use since it indiscriminately ruptures membranes of both fungal and human cells. To make a more selective drug, researchers have now altered how AmB interacts with membranes, allowing it to weaken fungal membranes while leaving mammalian membranes intact (Bioconjugate Chem. 2016, DOI: 10.1021/acs.bioconjchem.6b00629). The approach may be generalizable to other membrane-disrupting medications, including many antibiotics.

The exact mechanism for AmB’s activity isn’t known, but Steven L. Regen of Lehigh University and others have shown that the agent exists as either monomeric, individual molecules, or as aggregates. Monomeric AmB, he says, punctures the membrane surface to create a leaky cell that eventually dies, whereas the aggregate goes deep into the membrane and causes a catastrophic rupture that “blows the cell apart.” Importantly, the monomeric form selectively acts on fungal cells, he says, whereas the aggregate kills indiscriminately. Regen’s team wanted to “tame the aggregate,” blocking it from killing cells, while letting the monomeric form continue to target fungi.

The researchers tested this using sheep red blood cells. When treated with AmB alone, even at low concentrations, these cells release all of their hemoglobin, an indicator of catastrophic rupture. But when the researchers added the AmB-cholic acid conjugate, the cells largely kept their hemoglobin inside. This held true at concentrations much higher than would typically be delivered to treat fungal infections.

To determine whether it remained effective at killing fungi, the researchers also tested the conjugate against four clinically important species of Candida fungi. Although more of the conjugate was needed to fully stall fungal growth compared with AmB alone, the conjugate still worked in all cases.

The higher level needed with the conjugate “is unlikely to be a problem,” says Paul B. Savage of Brigham Young University. It is still in the range where you would view the compound as potentially clinically useful, he says. However, the molecule still needs to prove effective in animal models, he says, to see if the lab results translate into better activity or diminished side effects.