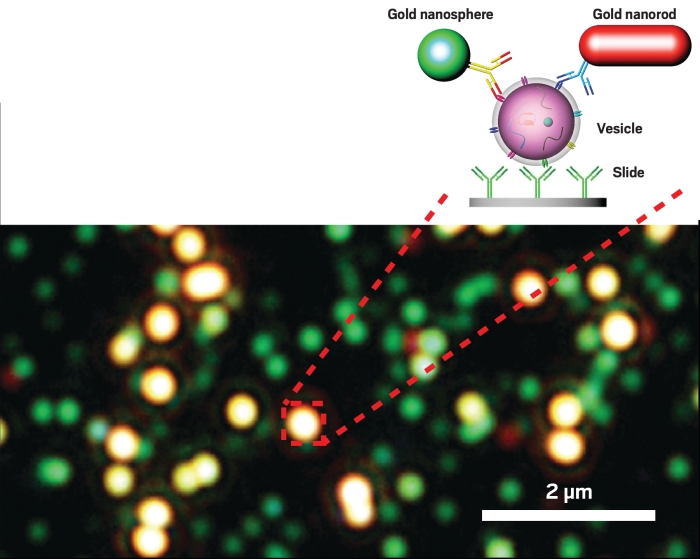 Credit: Nat. Biomed. Eng.
In a new sensor, a trio of antibodies helps capture and decorate vesicles from pancreatic cancer cells with gold nanorods and gold nanospheres, causing the vesicles to glow yellow.

Arizona State University’s Ye (Tony) Hu and his colleagues have delivered what they hope will be a double dose of good news for detecting pancreatic cancer. Pancreatic cancer is one of the leading causes of cancer deaths because it often goes undetected in early stages, according to the Mayo Clinic.

The researchers report a rapid and inexpensive nanoparticle-based diagnostic fueled, in part, by their second finding, a biomarker on the surface of vesicles released by pancreatic tumors (Nat. Biomed. Eng. 2017, DOI: 10.1038/s41551-016-0021).

As tumors develop, they release microscopic vesicles into a patient’s blood. If biosensors could isolate and identify these vesicles, researchers could potentially screen for cancer by pricking a patient’s finger and analyzing blood droplets. This would be easier and less costly than more conventional biopsies or positron emission tomography scans, Hu says.

But all cells release vesicles and determining whether those vesicles come from healthy cells or cancerous tissue has been a challenge, he explains. Now he and his colleagues have found that vesicles released by pancreatic cancer tumors overexpress a surface protein called ephrin type-A receptor 2, or EphA2.

The researchers steered their study toward EphA2 because of evidence collected by other cancer researchers and a computerized proteomic analysis. In this study, their new diagnostic tool helps solidify the protein as a biomarker of tumor-derived vesicles.

The biosensor consists of a glass slide divided into wells decorated with antibodies that capture extracellular vesicles by binding to a protein biomarker on the particles. Each well also contains gold nanorods and nanospheres that scatter light differently and shine different colors under a microscope. Nanorods appear red, whereas nanospheres glow green.

The team showed that this sensor differentiates between blood from healthy patients, patients with pancreatic cancer, and patients with pancreas inflammation. The latter condition is often confused with cancer in tests that use other biomarkers, Hu explains. The sensor requires minimal sample preparation, and its reagents are also comparable in cost to other immunoassay techniques, notably enzyme-linked immunosorbent assay or ELISA, the team reports. The sensor also works with samples as small as 1 µL, while ELISA needs more than 100 µL.

Rajesh Sardar, who develops nanosensors at Indiana University-Purdue University Indianapolis, says the new tool is exciting and transformative. “This simple, optical-based technique has the potential to screen patient samples much faster than ELISA or polymerase chain reaction,” he adds.

Pathologist Anirban Maitra agrees that the technology is promising and innovative. He works at the MD Anderson Cancer Center, as do some of Hu’s coworkers, although Maitra was not involved with the study.

Maitra, however, points out that the study was not blinded and each group was small with about 50 patients. Data in smaller studies such as this tend to look good, he says. “Validation in larger blinded sample sets becomes imperative,” he says. “I am hopeful that the PI and his team will expand their studies.”

Comments
Keith Knapp (February 8, 2017 9:17 PM)
I am extremely interested in what I read here. My father died over 20 years ago from pancreatic cancer and I remember too well the struggle he lived. Recently, I went to the ER with a significant pain in my abdomen that seemed to wrap around into my back. I mentioned my father's disease and told the doc so he could consider this. Their testing found a very high lipase result (633). Other tests, CT and Ultrasound, were performed but were unremarkable. The diagnosis was acute pancreatitis. I was told to watch my diet and consult with my primary care doc to decide what may have caused the episode. A blood test 3 weeks ago showed lipase back at normal levels. The doc is scratching his head and said to see how the next few months go. I have been well behaved diet wise and have been extremely active playing 2 or more hours of tennis 4 or 5 times weekly and walking as many as 5 miles on the other days. I've started losing a little weight and generally feel pretty good. Over the last couple days I have sensed slight symptoms of the attack I had ... bloated upper abdomen, pain in the same area of the back ... nothing severe however. At this point I am wondering if any of the tests I have had would use the advanced methods discussed in this article. My guess is no. I also wonder if the tests done for me so far would be able to detect early pancreatic cancer. Will your testing dependably detect EphA2 if it is present to the extent I could use the finding for diagnostic purposes?
Reply »

Matt Davenport (February 27, 2017 10:22 AM)
Thanks so much for your comment, Keith, and I apologize for not responding sooner. I'm very sorry to hear about your father, as well as your experience with pancreatitis. You raise some really good points/questions in your comment and I would say your suspicions are correct (for the time being). Researchers will need to subject this device to more rigorous testing to verify that these promising early results hold.
Reply »