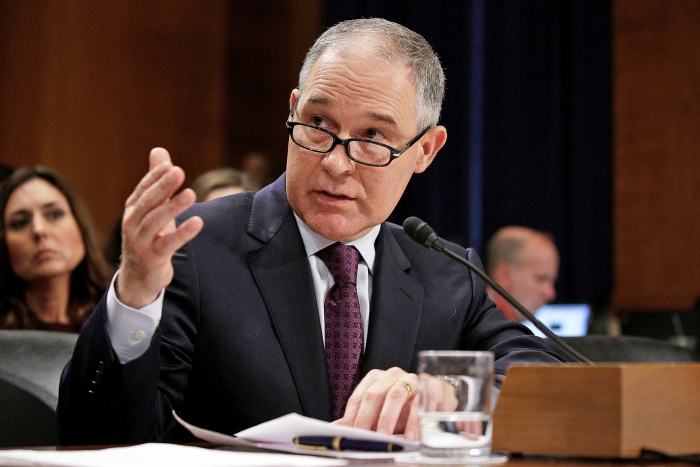 Pruitt, who began serving as Oklahoma attorney general in 2011, sued EPA more than a dozen times during the Obama Administration to challenge air and water rules. The incoming agency head has opposed EPA limits on carbon dioxide from power plants, and he has objected to rule-making that would overhaul the agency’s chemical plant risk management program.

The American Chemistry Council, a chemical industry trade association, issued a statement congratulating Pruitt on his confirmation, saying the group looked forward to working with the new administrator on the implementation of the revised Toxic Substances Control Act (TSCA), which was enacted last year.

“Efficient and effective implementation of the Act will restore public confidence in EPA’s regulation of chemical safety, and will promote American innovation and competitiveness,” ACC said.

On Feb. 16, as the Senate debated Pruitt’s confirmation, an Oklahoma district court ordered Pruitt’s Oklahoma Office of the Attorney General to release thousands of e-mails between Pruitt and oil and gas companies that plaintiffs argued could reveal conflicts of interest.

Senate leadership earlier in the week denied a request from Democrats to delay Pruitt’s confirmation vote in light of the pending court decision.

Calls to severely cut EPA’s staff or terminate the agency altogether go before Pruitt as he takes the agency reins. Congressman Matthew Gaetz (R-Fla.) introduced a bill on Feb. 3 that would end the 46-year-old EPA on Dec. 31, 2018.

On Feb. 1, Republican lawmakers in the House of Representatives introduced industry-favored legislation that would levy the Congressional Review Act to overturn a chemical plant safety regulation that EPA finalized in late December. The rule modifies the agency’s Risk Management Program in response to a West, Texas, warehouse explosion involving ammonium nitrate that killed 15 people.

In a Feb. 10 letter to EPA, House lawmakers requested details about agency efforts to identify and reduce “administrative waste.” Similar letters were sent to the Commerce, Energy, and Health & Human Services departments.

A series of executive actions, including a memorandum that ordered federal agencies to delay implementation of recently published final regulations, a memorandum that ordered a federal hiring freeze for civilian employees, and directives that temporarily halted EPA grants and restricted external communication, created uncertainty for EPA employees during the first days of the Trump Administration.

“They can do that as long as it’s on their own time,” says O'Grady, a biochemist who began working at EPA during the Reagan Administration. “Our people are dedicated to the mission of protecting human health and the environment.”

Chad Brick (February 19, 2017 9:02 PM)
And what would that mean in this context? Getting rid of people who know what they are talking about, or getting rid of regulations that pass cost-benefit analysis? Because that is what he is going to do.
Reply »

Dean (February 23, 2017 8:47 AM)
Another Trump puppet put into a position they have no business being in. Talk about the fox guarding the henhouse!
Reply »

Jerome Zoeller (February 23, 2017 9:35 AM)
A large part of the responsibilities of business is the disposal of their waste. Most businesses accept these responsibilities, and the expenses they require. But many ignore these responsibilities, and the cleanup expenses are passed on to the American people. This regrettable situation will continue as long as corporations lobby ( and contribute to ) Congress to continue using tax dollars to assume the expenses of environmental protection. The selection of a man like Pruitt indicates this trend will accelerate.
Reply »

HG (February 23, 2017 9:40 AM)
Since Region 8 intentionally released 3 million gallons of mine waste into the Animas River in August 2015 I don't know how much worse EPA can get. And remarkably the person that decided to do it still works at the agency. The EPA really should get back to the basics of science to protect the environment or they may have to be renamed the Environmental Destruction Agency.
Reply »