What’s in a bowling ball, and how does its chemistry help topple pins? 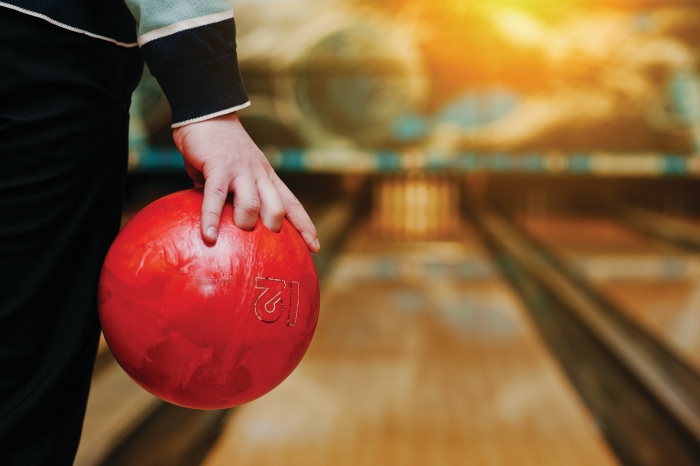 Even if you haven’t seen the 1996 cult comedy “Kingpin” about bowling and redemption, you can probably imagine Bill Murray’s indelible character Ernie (Big Ern) McCracken: With sweat on his brow and a comb-over flapping comically in the breeze, Murray stands at the top of the lane, gripping his beloved ball. He whips the crowd into a frenzy as he holds it aloft—a transparent ball with a single red rose encapsulated in the center—then hooks it down the lane, scoring a crucial strike in the tournament final.

Although many pro bowlers cherish Murray’s over-the-top performance, they might have a few bones to pick about the technical aspects of this scene. “It would have to be extreme conditions on the lane for a ball like that to come into play,” says professional bowler Kelly Kulick. Typically, pro bowlers use this type of smooth-surfaced ball when they just want to pick off one or two pins remaining at the end of the lane to score a “spare.” To knock all 10 pins down and secure a strike as Murray did, savvy bowlers typically use something else entirely: balls that have an asymmetric weight block in the center and that are coated with a porous polyurethane shell.

Ancient Egyptians, who invented a crude form of the game, would certainly be impressed by today’s bowling balls, which are a big improvement over their stone predecessors. In fact, the sophisticated materials science slipped into modern balls has helped improve player performance, says Danny Speranza, senior director of equipment specifications and certifications at the U.S. Bowling Congress, the sport’s national governing organization. Between 1910 and 1980, only one out of about 3,000 bowlers registered with USBC could score a perfect game—that’s getting a strike 12 times in a row. By 2007, that figure had increased to one out of about 30.

Costing anywhere from around $50 to $250 depending on its design, a modern bowling ball typically contains three parts: an inner core, an outer “filler” core, and a shell, which is called the coverstock in bowling lingo.

The exact materials that go into making each part of the ball are considered “proprietary technologies that are closely guarded,” says Victor Marion, director of R&D for Utah-based manufacturer Storm Products. In general, though, the inner core is made of powdered metal oxides such as calcium or iron oxide mixed with a resin and catalyst to harden the mixture. This is the heaviest part of the ball, and its shape—whether symmetric like a sphere or asymmetric like a lightbulb—influences how the ball rotates down the lane.

The outer core is light, yet rigid, containing substances such as polyester or glass beads, also mixed with a resin. Manufacturers use this part of the bowling ball to fine-tune its final weight. Heavy 7-kg bowling balls are quite dense, but balls weighing 4.5 kg or less have such a low density that they can float in water.

And don’t let the outer layer of the ball fool you with its bright, swirled colors—and sometimes delightful smell (Storm Products impregnates its coverstock with fragrances such as “birthday cake”). The outer shell of the ball is not ornamental; it seriously influences the ball’s motion as it hurtles down the lane, Speranza says.

The shell “is all about generating friction” with the lane, Storm’s Marion explains. “That’s where a lot of the magic happens.”

When a bowler releases a ball, it skids down the lane through a thin layer of mineral oil. About two-thirds of the way down an 18-meter lane, the ball enters a nonlubricated zone. There, it gains traction like tire treads on a road. At this point, depending on what type of spin the bowler applied to the ball during its release, the ball can really begin to curve, or hook, across the lane to make the pins scatter.

Lane conditions—the amount and pattern of the oil applied to the lane—can vary widely from bowling alley to bowling alley. And the conditions can change over the course of a game or tournament as balls soak up or spread around the oil on the lane. Recalling the tire tread analogy, Marion explains that “some days you’re driving in California and it’s a sunny day, and some days you’ve got six feet of snow and you need every bit of traction you can get.” On those so-called sunny days, when lane conditions are fair, bowlers don’t need a ball that creates a lot of friction with the lane, but on the snowy days, they might want something with a more porous, and therefore rougher, outer shell—a ball with some studded snow tires, so to speak. “Good bowlers know which ball matches up best for a particular game,” Speranza says. “If they’re going to a tournament, pros can take six to eight different balls with them.”

Kulick says that for professionals who bowl full-time, that number can even go higher. She’s been known to ship 10 balls and carry five others with her when traveling to tournaments.

“Usually, bowlers will start out with the most aggressive ball in their bag”—the one with the highest friction, Kulick adds. Then they’ll keep adjusting which ball they use depending on where the ball starts to hook as it rolls down the lane.

The most basic of outer shells on a bowling ball is made of polyester. This type of plastic covering is rigid and has low friction, and you use it when you want to throw straight, like when you need to topple just one or two pins to pick up a spare, Speranza says. Balls with a polyurethane shell, on the other hand, experience higher friction with the lane. To make these rough yet pliant shells, which are useful for knocking down many pins at once, manufacturers mix isocyanates and polyols. If they want to make an even higher friction ball with a so-called reactive resin shell, they add proprietary ingredients such as plasticizers to a urethane base layer to create a multitude of cross-links in the polymer strands, giving the ball’s coating more porosity and roughness.

These high-friction reactive resin balls were favorites among pro bowlers for nailing strikes—at least until recently. According to Speranza, one of the biggest changes in the sport in the past 10 years is that some pro bowlers now throw the ball with a two-handed release rather than a one-handed release. One celebrity bowler, Jason (Belmo) Belmonte had great success with the technique in tournaments and popularized it.

“When you throw a ball with two hands, you can put more spin on it” and therefore get more hook, Speranza explains. Two-handed bowlers have discovered that they don’t often need super high-friction balls. They don’t want to over-hook the ball on the lane and send it into the gutter, so they’re increasingly taking a step backward to balls with a less sophisticated urethane shell.

If all this strategizing among pro bowlers sounds complicated, for ball manufacturers, it’s even more so. They’re subject to the rules and regulations of USBC. To level the playing field and make sure that none of the nearly 46 million bowling participants in the U.S. has an unfair advantage because of overly engineered equipment, the organization sets limitations on parameters such as the coefficient of friction and surface roughness of a bowling ball’s outer layer.

“It’s amazing how complicated it is to get the right level of performance in a ball and still be within specifications,” says Marion, who formulates new ball designs for Storm each year. To get the chemistry just right, he adds, “it’s like putting together a jigsaw puzzle.”

What’s even more complicated? Bowling a tournament-winning strike with an ostentatious rose-decorated ball not really designed for the task. Big Ern was even more of a phenom than the crowd suspected.

UPDATE: This article was modified on February 21, 2017 to refresh its information and data.

Polymers
What’s inside golf balls, and can chemistry make them fly farther?
Materials
Automakers Look To Adhesives And Aluminum For Gas Savings
Education
Curling Chemistry, Speed For Sliders
Share X
To send an e-mail to multiple recipients, separate e-mail addresses with a comma, semicolon, or both.
Title: What’s in a bowling ball, and how does its chemistry help topple pins?
Author: Lauren K. Wolf
Chemical & Engineering News will not share your email address with any other person or company.

Comments
Robert Buntrock (March 2, 2017 5:03 PM)
Not stated was how long these "enhanced' bowling balls have been made. As far as I know, they used to be made out of ABS polymer. and were not "goosed" like those cited here. Back in the day ('50s and '60s) when I was bowling for fun with friends I bought my ball (used of course) from a bowling alley going out of business in downtown Minneapolis for $5 and had it rebored for my hand. Then again, I was never that good, with a 142 handicap max.
Reply »

laurenkwolf (March 5, 2017 10:21 PM)
Thanks for the question, Robert. Polyester bowling balls have been used since the 1960s, I believe. Polyurethane versions have been in use since the 1980s, and reactive resin balls were created in the 1990s. In the 2000s, manufacturers started putting sharp or hard particles in the coatings on balls to give them more friction with the lane, but bowlers found that those balls wore out fast (their performance declined, presumably because the particles weren't stable), so they've fallen out of favor.
Reply »

Braden Bills (June 9, 2017 10:31 AM)
It's interesting to know the physics and chemistry behind bowling. I've never even considered that it could be so intricate! This is making me want to go bowling more often. http://www.frontierbowl.net/
Reply »