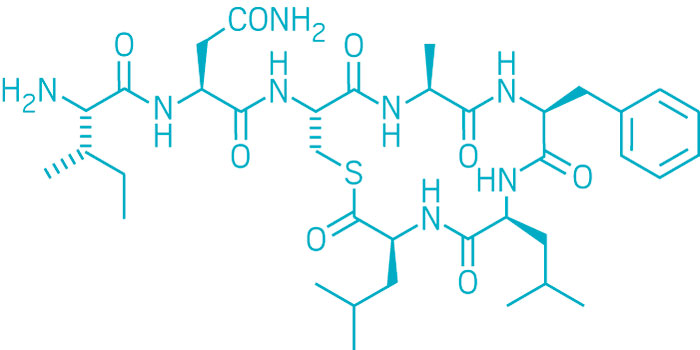 Forced into a literal do-or-die situation, bacteria evolve ways to evade death from antibiotics. These adaptations eventually lead to the problem of antibiotic resistance. One way to sidestep this problem could be to take the pressure off bacteria and let them live, while also blocking their ability to cause harmful infection. Using this approach, researchers have developed a new material made of nanofibers with peptides incorporated that block infection without killing bacterial cells. The easy-to-make material could be integrated into dressings for wounds, the researchers say (ACS Infect. Dis. 2017, DOI: 10.1021/acsinfecdis.6b00173).

[+]Enlarge
Credit: ACS Infect. Dis.
Electrospun fibers containing a peptide that blocks bacterial quorum sensing prevent Staphylococcus aureus from activating its infectious pathways. These fibers could one day be made into bandages that help prevent infection. 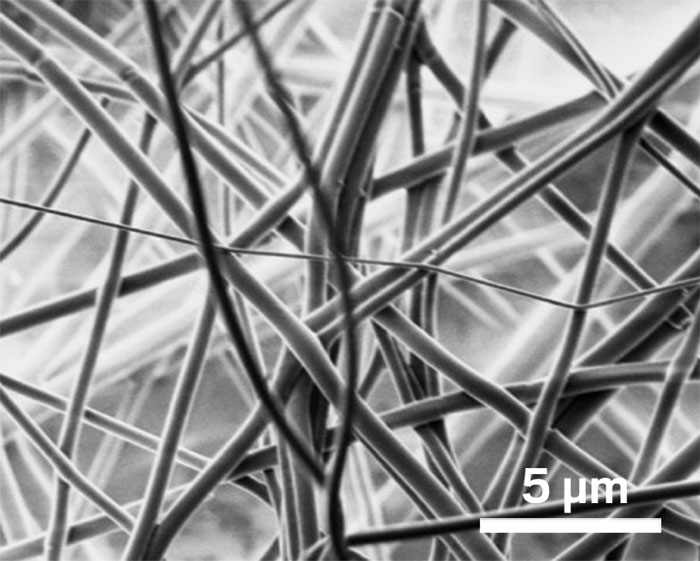 Credit: ACS Infect. Dis.
Electrospun fibers containing a peptide that blocks bacterial quorum sensing prevent Staphylococcus aureus from activating its infectious pathways. These fibers could one day be made into bandages that help prevent infection.

The approach targets bacterial quorum sensing—a mode of chemical communication used by bacteria to detect others of their species. When they sense that enough of their kind are present, they can mount an infectious attack. For more than 15 years, chemist Helen E. Blackwell of the University of Wisconsin, Madison has developed peptides to block this quorum sensing pathway, thereby preventing cells from attacking their host, regardless of their number. Although researchers have attempted to embed compounds that block quorum sensing into materials that could be used as wound dressings on patients, it’s challenging to make materials that deliver the optimal concentration of inhibitor to the right place to affect bacteria. Blackwell teamed up with David M. Lynn, a chemical engineer at the University of Wisconsin, Madison, to explore if nanofibers embedded with quorum sensing inhibitors could control bacterial infection.

The researchers mixed an inhibitor peptide developed in Blackwell’s lab into a solution of poly(lactide-co-glycolide), an FDA-approved polymer that’s long been used in biodegradable sutures and drug delivery methods. Then the team used electrospinning—a technique that relies on an electrically charged needle to spin threads out of a polymer mixture—to create a nanofiber mat on a piece of gauze.

The researchers tested whether the electrospun nanofibers could control quorum sensing in normal and antibiotic-resistant strains of Staphylococcus aureus—the latter of which kill more people in the U.S. annually than Parkinson’s disease, HIV/AIDS, emphysema, and homicide combined. Using a strain of S. aureus engineered to carry fluorescent reporter genes, the scientists found that the fibers with quorum sensing inhibitors were indeed able to block the bacteria from successful quorum sensing for up to two weeks. Moreover, when cultured in petri dish with red blood cells, the treated bacterial cells did not rupture the blood cells, whereas untreated cells did. Ruptured cells signify that bacteria are communicating via one quorum sensing pathway that causes infection.

Quorum sensing inhibitors have been around for more than a decade, but their promise has yet to be realized. “There’s always been this hype that they’ll be the next-generation of antimicrobial agents, but they’ve never reached the level of success that one would have hoped,” says Herman O. Sintim, a chemist at Purdue University not involved in this work. “But this study could re-energize the community that, indeed, these small molecules can be translated to clinical use.”

Blackwell and Lynn are now testing whether quorum sensing inhibitors embedded in nanofibers can work against other bacterial pathogens, such as Pseudomonas aeruginosa and Escherichia coli. They could also tune the nanofibers so that drugs can be released for longer or shorter than fourteen days, which would be useful clinically for different types of wound dressings, Lynn says.

Comments
Ron Huber (March 16, 2017 1:13 PM)
Kudus to researchers Blackwell and Lynn for their discovery that quorum sensing inhibitors embedded in nanofibers appear to offer a way to demonstrably and usefully interfere with quorum sensing by virulent bacterial species.

I would ask that they and their peers keep in mind the extraordinary importance of quorum sensing in critical biogeochemical processes throughout our lands, seas and air. While I doesn't doubt in the slightest that biosecurity protocols in their labs and those of others now pursuing this are more than adequate, we ask that researchers keep in mind that a host of non-medical uses will be using quorum sensing disruption to protect everything from salmon farm netting to container ships' ballast tanks, to keeping marine bacteria from creating surface biofilms that attract larger fouling organisms onto those surfaces.

Collectively the non-medical uses of quorum sensing interference _may_ amount to little at present. Let's seize the moment, look at Earth's non-virulent microbial communities - the overwhelming majority - and be sure we don't "destroy the village to save it."
-Ron Huber is executive director of Friends of Penobscot Bay, Maine, USA
Reply »