Measurements heighten mystery of D-amino acids in the brain 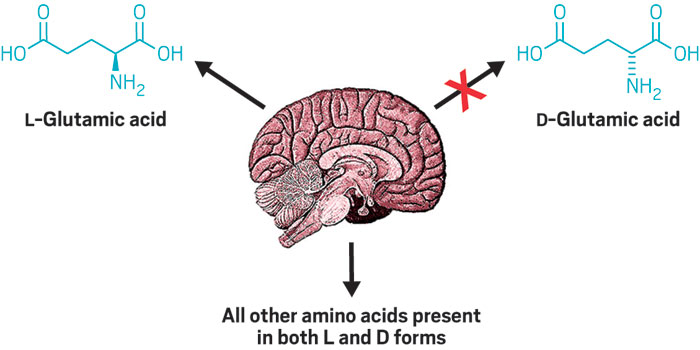 Right-handed amino acids—found in small doses in nature—are largely a mystery. In humans, most linger at low concentrations yet play unknown roles in the body. A new survey of right- and left-handed amino acids in the mouse brain thickens the plot. The study’s findings imply that the brain tightly regulates the levels of right-handed amino acids and hint at undiscovered enzymes that flip lefties to righties (ACS Chem. Neurosci. 2017, DOI: 10.1021/acschemneuro.6b00398).

Ubiquitous left-handed L-amino acids serve as the building blocks of all proteins. However, their mirror images, right-handed D-amino acids, are rarer and more perplexing. Their purpose in humans was unknown until 2000, when scientists figured out that one of them, D-serine, is a neurotransmitter. Many researchers think the presence of other D-amino acids in the brain and body suggests that they must have significant functions, too. To find those functions, though, requires baseline surveys that determine normal levels of D- and L-amino acids in various parts of the body, says Daniel W. Armstrong at the University of Texas, Arlington.

Armstrong’s group collaborated with Adam L. Hartman’s laboratory at Johns Hopkins University to measure baseline values for D- and L-amino acids in the cortex and hippocampus of mice, brain areas of interest because of Hartman’s previous work on epilepsy. The collaborators separated blood from brain tissue and then purified and fluorescently tagged the amino acids in the samples. They measured the amino acids by separating the D- and L-varieties with highly sensitive chiral columns and then detecting the fluorescent peaks.

“Many curious things turned up,” Armstrong says. Most D-amino acid levels were 10 to 2000 times as high in the brain as in the blood for the 12 amino acids measured. The concentration of the neurotransmitter D-serine, near 0.05 μg per mg brain tissue, was among the highest, but D-aspartate and D-glutamine were even higher. Such quantities suggest neural roles for many of the D-amino acids, Armstrong says.

Particularly striking was the conspicuous absence of D-glutamate anywhere in the brain or blood. L-glutamate is the most abundant amino acid in the brain, so Armstrong expected to see at least some D-glutamate. Yet his team couldn’t detect it at all with a detection threshold of 0.00005 μg per mg tissue.

Or, Herman Wolosker of Technion Israel Institute of Technology suggests that the brain may also lack transporters that recognize D-glutamate, so it cannot be imported from the blood into the brain.

Other findings from the study raise the specter of ghost enzymes, too: Wolosker points out that for some of the less abundant amino acids, relatively high fractions exist in the D-form. Isoleucine, for instance, is 24% right-handed in the hippocampus. “It points to the possibility of additional enzymes in the brain that transform L- into D-amino acids,” he says.

Proteomics
Many peptide hormones are O-glycosylated
Biological Chemistry
An amino acid mystery
Biological Chemistry
Receptor for prion protein identified
Share X
To send an e-mail to multiple recipients, separate e-mail addresses with a comma, semicolon, or both.
Title: Measurements heighten mystery of D-amino acids in the brain
Author: Louisa Dalton
Chemical & Engineering News will not share your email address with any other person or company.

Comments
Dr Yemisi Latunde-Dada (March 30, 2017 4:09 AM)
It is important to compare the levels of D-glutamate in the blood with that of the brain. If it is a case of the transporter, another possibility is the blocking or inhibition of the D-transporter by L-glutamate at the blood-brain barrier.
Reply »

H Knechtges (March 30, 2017 11:18 PM)
I am curious if the levels of the glutamine amino acid(s) would differ for someone who is negatively affected physically by ingesting MSG (Monosodium Glutamate)....for example, onset of a severe migraine when MSG is consumed. (As a migraine sufferer for 33 years, I would be very interested in this aspect of the research.)
Reply »

Nick Borek (April 4, 2017 12:21 AM)
The levels of the glutamine amino acids do indeed differ for someone who is negatively affected physically. The concentration of the neurotransmitter D-serine, near 0.05 μg per mg brain tissue, was among the highest, however t D-aspartate and D-glutamine were even higher. Since the person is affected physically, their brain is missing something such as a receptor which could cause the levels of the amino acids to differentiate.
Reply »

Louisa Dalton (April 6, 2017 4:56 PM)
H Knechtges--What role L- and D-glutamate may play in people’s reactions to the food they ingest (including MSG) is interesting to Armstrong as well. MSG is mostly left-handed, but there is a small percentage of the right-handed form in commercial preparations. Part of Armstrong’s planned study to test blood levels will include testing the blood before and after a large meal. If they can first establish baseline levels for what happens in the blood after consuming MSG and other food sources of D-amino acids, scientists can start to tackle what effects these may be having.
Reply »

Cassie (May 11, 2017 10:41 PM)
I have an Alzheimer's like reaction with muscle weakness :45 minutes after ingesting anything with d-glutamate (msg, guar gum, caramel color, etc) so if you ever need a test subject just let me know.
Reply »