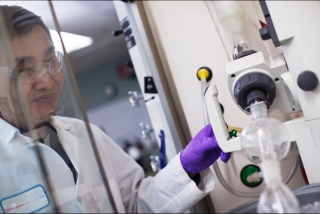 Forge Therapeutics has closed its first large round of financing, securing $15 million from MagnaSci Ventures, Evotec, and other investors. The tiny biotech firm, founded on technology developed in the labs of University of California, San Diego, chemist Seth Cohen, will use the proceeds to push forward its gram-negative antibiotics program.

Forge was the subject of a C&EN story in early 2016 about what it’s like to be a young biotech firm looking for financing and partnerships during the annual JPMorgan Healthcare meeting. At the time, the company was meeting with venture capitalists with the goal of raising its first round of funding to support development of metalloprotein inhibitors—in particular, compounds that block LpxC, a zinc-containing enzyme found in bacteria.

Forge’s goal was to raise the funds by the end of 2016. CEO Zachary Zimmerman attributes the delay to two developments that prompted a shift in the firm’s fundraising strategy.

The first was the creation in July 2016 of the Combating Antibiotic Resistant Bacteria Accelerator (CARB-X), a public-private partnership that is providing sizable grants to companies developing novel antibacterials. Forge pursued funding through the program and recently received the largest of CARB-X’s first awards—$4.8 million over 15 months and potentially $4 million more as its project progresses.

And in December, Forge formed an alliance with Evotec, a contract research firm, to move its LpxC inhibitors through lead optimization and development.

With the influx of cash, Forge plans to “graduate” from the incubator space it inhabits at Johnson & Johnson’s JLABS in San Diego. The biotech firm will also hire a few key scientists to complement the dozen Evotec researchers working on its antibiotic project. It hopes to start human tests on an LpxC inhibitor by 2020.

The funding marks a major milestone for the young firm and its management. Zimmerman notes that his 15-year-old son, who has watched his dad navigate the pressure cooker that is a start-up, told him, “Hey, dad, you can finally relax!” Zimmerman had to laugh as he explained, “No, quite the opposite. Now we can finally get to work.”