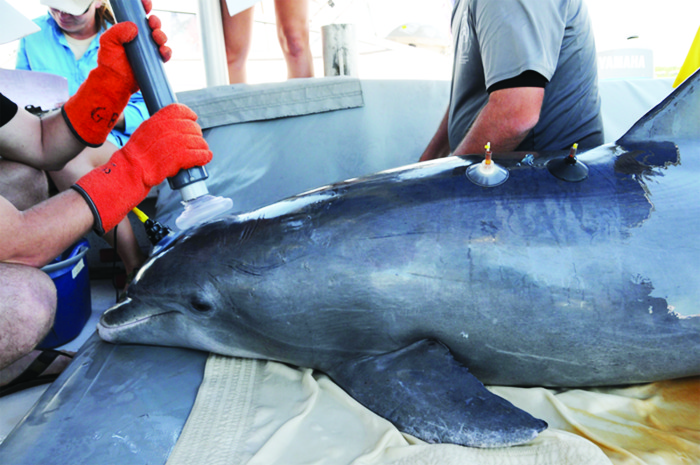 Credit: Environ. Sci. Technol.
A Breathalyzer-type device lets researchers sample compounds in dolphins’ breath that may give information about their health.

Certain molecules in the breath of dolphins exposed to the 2010 Deepwater Horizon oil spill correlate with signs of respiratory illness, a new study shows. The findings give researchers a set of biomarkers that could help assess the health of wild dolphins and other marine mammals using relatively noninvasive breath analysis (Environ. Sci. Technol. 2017, DOI: 10.1021/acs.est.6b06482).

During veterinary exams on dolphins, marine biologists often take small samples of blood and use ultrasound to check for lung illness or pregnancy. But dolphins, like humans, also exhale metabolites that can tell us about their health, and analyzing them could offer a less invasive monitoring tool, says Cristina E. Davis of the University of California, Davis. She and her colleagues have developed a Breathalyzer-type device that can capture compounds in dolphins’ breath for analysis. Before researchers can make a diagnosis based on breath alone, however, they need more information on how compounds in dolphin breath relate to dolphin health.

The blowout of BP’s Macondo well triggered a deadly explosion on the Deepwater Horizon oil rig and the largest oil spill in U.S. history. As the oil reached coastal regions along the Gulf of Mexico, including Barataria Bay, La., researchers at the National Oceanic & Atmospheric Administration and the National Marine Mammal Foundation began monitoring the health of local populations of bottlenose dolphins. A year after the spill, blood and ultrasound tests showed that the oil exposure harmed the dolphins’ lungs, adrenal gland function, and ability to reproduce; these problems have persisted in the years since. Many dolphins contracted bacterial pneumonia, and dolphin death rates spiked.

The groups collaborated with Davis to include breath analysis in their monitoring studies. For health exams on wild dolphins, researchers use a boat to encircle the dolphin with a net and bring it on deck temporarily for tests—including the breath analysis, which works best when the animal can be kept relatively still. Taking a breath sample involves holding the device—with a squishy first aid mask at its base connected to a capped glass tube surrounded by ice—over the dolphin’s blowhole for about 10 breaths. Organic compounds freeze onto the glass, and the scientists then use a plunger to scrape them into a vial for later mass spectrometric analysis and compound identification.

To compare the dolphins in Barataria Bay with healthy populations, the researchers also examined a wild population in Sarasota Bay, Fla., that was not affected by the oil spill and a population managed and trained through the U.S. Navy Marine Mammal Program in San Diego.

The team found that the two healthy groups of dolphins had fairly similar profiles of breath metabolites, but that dolphins exposed to the spill had quite different patterns. About two dozen compounds in the breath of Barataria Bay dolphins were linked with ultrasound diagnoses of lung consolidation, a possible sign of pneumonia in which lung tissue fills with liquid. Some of these compounds are products of the breakdown of lung cells, including phospholipids such as phosphatidylglycerol. The oil-affected dolphins’ breath also had bacterial metabolites that may be linked with bacterial pneumonia, and leukotriene E3, a marker of asthmatic inflammation.

“It’s a fantastic, innovative study,” says Jonathan Beauchamp, an expert in breath analysis at Fraunhofer Institute for Process Engineering & Packaging and associate editor of the Journal of Breath Research. “It’s quite impressive to have such good separation” of the metabolites in the different populations, he says, and for the researchers to have identified so many of them. He says the method could complement current tools to assess the effects of disasters on marine mammals.

Next, Davis and her colleagues want to figure out how to use these findings to track the health of other dolphin populations, and, down the road, other marine mammals such as whales and manatees.

The researchers also hope to refine the method to collect breath from wild dolphins when they are still in the water, and eventually to develop a device that could analyze the data in the field. “This opens up the possibility of doing health assessments on species that right now we can’t do, because there’s no way to catch them and handle them,” says study author Lori H. Schwacke of the National Marine Mammal Foundation.

Industrial Safety
What did we learn from the Deepwater Horizon disaster?
Environment
A breath test for dolphin health
Water
After The Deepwater Horizon Disaster
Share X
To send an e-mail to multiple recipients, separate e-mail addresses with a comma, semicolon, or both.
Title: Dolphin breath holds chemical clues to disease
Author: Deirdre Lockwood
Chemical & Engineering News will not share your email address with any other person or company.

Comments
Joanna Hinton (May 6, 2017 2:11 PM)
Well done. Very interesting study and dolphin air breathalyzer. What a shame so many animals and ecosystems were damaged by the Deepwater Horizon disaster.
Reply »