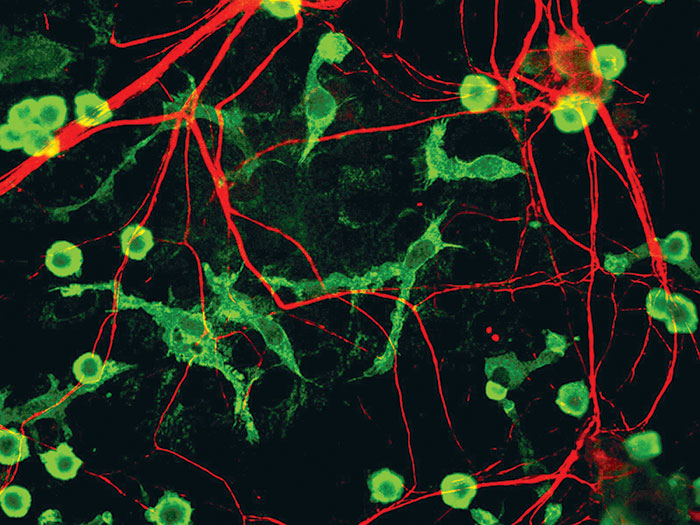 One of the hallmarks of Alzheimer’s disease is the formation of clumps, or plaques, of the protein amyloid-β (Aβ) in a person’s brain. Aβ usually starts to aggregate in parts of the hippocampus, the memory forming hub of the brain, but the protein clumps eventually spread to other brain regions as the disease progresses.

A new study in mice suggests that a protein released by immune cells during inflammation could aid this spread (Nature 2017, DOI: 10.1038/nature25158). The findings offer a new target to slow the progression of the neurodegenerative disease, the researchers who conducted the study say.

“We know quite a bit about Aβ spreading in Alzheimer’s, and we know that neuroinflammation plays a major role in the disease, but this paper is the first to link the two,” says Terrence Town, a neuroscientist at the University of Southern California who was not involved in the work.

Researchers have found many connections between inflammation and Alzheimer’s disease. For instance, immune cells, such as microglia, accumulate in parts of the brain with a high density of Aβ plaques. Also, people who take anti-inflammatory drugs to treat rheumatoid arthritis have lower risks of developing Alzheimer’s later in life.

A few years ago, Michael T. Heneka of the University of Bonn and coworkers had determined that protein complexes called inflammasomes might be involved in Alzheimer’s. When immune cells bump into possible invaders, such as bacteria, the cells form the large protein complexes, which then trigger the release of inflammatory signaling molecules to defend against the possible threat.

Heneka’s team removed a gene that codes for a key component of the inflammasome from mice with a propensity to form Aβ plaques. These animals had fewer cognitive deficits and Aβ plaques in their brains than mice with the gene.

The team wondered whether part of the inflammasome could be helping the spread of Aβ in the mice. In particular, they focused on a protein called ASC, which also likes to aggregate. When the inflammasome forms, ASC aggregates into fibers, recruiting the other proteins in the complex. Microglia also release clumps of ASC, called ASC specks, to help propagate inflammatory responses. So these proteins could bump into Aβ floating around outside of cells.

In the new study, Heneka’s group found that ASC specks accelerated how fast Aβ aggregates in test tubes. Also the scientists showed that ASC is necessary for the spread of Aβ in mice. The researchers could trigger the formation of Aβ plaques in the brains of young mice by injecting the animals with extracts from the brains of older mice that had developed the protein clumps. But if the young mice lacked the gene for ASC, the injections didn’t cause accelerated plaque deposition.

Heneka’s team thinks that Aβ interacts with regions of ASC that recruit other proteins to the inflammasome. The scientists demonstrated that injecting mice with antibodies that bind to this part of ASC prevents the protein from aiding the spread of Aβ.

Whether the damage caused by Aβ is what triggers the inflammatory response that leads to ASC release is still an open question, Heneka says. He points out that many other conditions can trigger a response from microglia, including hyperactive neurons. But he does think targeting the interaction between ASC and Aβ could lead to possible Alzheimer’s therapeutics.