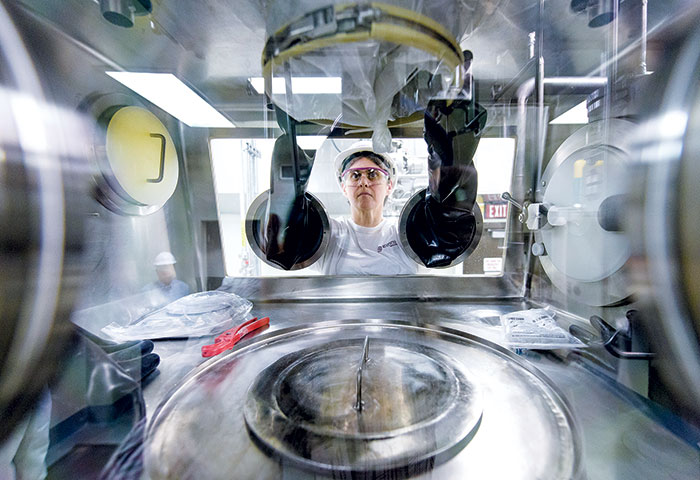 Evonik Industries declared victory for its exclusive synthesis division late last year when it announced the renewal of a long-term supply contract with Eli Lilly & Co.

Tippecanoe at a glance

The German firm bought Lilly’s TippecanoeLaboratories in Lafayette, Ind., in 2010 and had been supplying the drug company with active pharmaceutical ingredients (APIs). Its plan was to convert the huge site into a contract manufacturing base in the U.S. Now that the Tippecanoe facility serves more than 20 customers, including Lilly, Evonik said its plan has been realized.

It is a bold claim, given the challenge of putting a huge facility—one that Lilly no longer thought it could maintain—to work for other companies.

The plant is enormous by the standards of contract API production, with several manufacturing buildings, a large fermentation facility, and a water treatment plant that together take up a square kilometer of real estate on a much larger campus. Pulling up across from a school bus at an intersection on a recent tour seemed unremarkable in what felt more like an industrial park than one company’s factory.

An equal challenge is morphing a workforce of 700 people from a captive manufacturing division for one drug company into a contract services operation that can juggle a complex suite of assets to meet multiple customers’ demands.

“This has been a very successful story,” asserts Andreas Meudt, head of Evonik’s exclusive synthesis business. Although it is only a small part of a large, diversified specialty chemical firm, exclusive synthesis is expected, like all Evonik endeavors, to be a top-three player. Meudt credits Tippecanoe with bringing the company to that level in the exclusive synthesis field, alongside the Swiss firms Lonza and Siegfried. The site’s strength in high-potency drugs, fermentation, and enzyme reactions has been a real draw for new business, he says.

“It has taken some time, but now we have brought in 20 customers,” Meudt says. “It was a real culture change.”

That culture change took place during a time of many changes in the drug chemical sector. In selling Tippecanoe, Lilly was following the lead of Pfizer, AstraZeneca, and several others of its big pharma cohort. Between drugs coming off patent, new drugs requiring smaller volumes, and the rise of contract manufacturing, pharmaceutical companies were offloading assets to firms that would turn around and supply them with APIs.

The repurposing of the Tippecanoe site was largely accomplished under the direction of general manager Clive Whiteside. Whiteside, who started his career at ICI, describes the cultural conversion as a protracted effort. But he emphasizes that one element of culture has remained constant at Tippecanoe—a midwestern work ethic.

“One of the things that helped us be successful—that we inherited from our previous owner—is a high-quality workforce with know-how and commitment,” Whiteside says. “America’s Midwest breeds hardworking people who are good at working together. And that is a huge advantage for a service company.”

Whiteside also credits Lilly’s commitment to quality management as a strong foundation on which to build a contract manufacturing organization (CMO). Under Evonik, he says, the site has had five inspections by the U.S. Food & Drug Administration and received no warning letters.

The U.S. location itself has also been a draw, Whiteside says, partly because of the shift from outsourcing to Asia to producing in the West that has swept the drug industry since the acquisition. “You can say it was good anticipation at the time, but what we have certainly seen in the years since the acquisition has been increasing attractiveness of a Western location, particularly a U.S. location.”

The size of the plant, on the other hand, might take some explaining to drug industry customers surveying a field of small- to medium-sized contract firms that promote agility and close customer relationships. Evonik can match that offer, Whiteside says, claiming that size has its advantages. 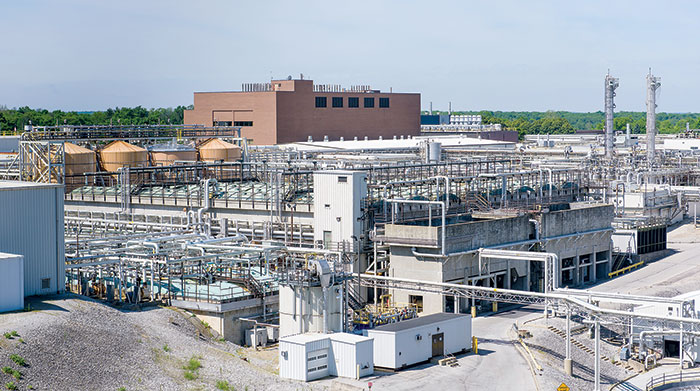 Credit: Evonik
Evonik has been working to put large-scale API manufacturing and fermentation capabilities acquired from Lilly to work.

“One of the things we tell our clients is that there are huge benefits to being a CMO that is part of a company that is as financially strong as Evonik, because there is a high level of confidence we will be around for the whole duration of their project,” he says.

The company can also handle the cost of regulatory compliance, Whiteside says. “When Indiana wants to raise the bar, we have to make substantial investments. So having the financial strength of a company as diverse as Evonik behind us is a real differentiator between ourselves and smaller CMOs.”

Moreover, the Evonik executives claim that they are putting the plant to full and good use. “We are operating at 60–90%-plus capacity utilization in the different plants,” Meudt says. “As often happens in this industry, some more mature projects are going down in volume, hence generating capacity for new projects. Overall, we are well booked but can be flexible for new projects.”

Whiteside says the company is even looking to invest in a modest expansion of the facility. He won’t quantify the amount of business Evonik continues to do with Lilly but says that more than half the available capacity at Tippecanoe is open to other customers.

The planning involved in multiclient booking of the site is one of the many skills the staff at Tippecanoe needed to hone post-Lilly, Whiteside says. He describes a fundamental mind-set shift among Tippecanoe employees.

“The change from captive manufacturing site to CMO is a change from being a cost center to a profitable service business,” he says. “Many companies talk about service being important. But if you are a CMO, it is the business. We’ve spent years getting people to understand what it means to be a service business.”

The executives say Evonik has retained most of those people, moving many former Lilly employees into management positions. Staff is down to about 620 through normal attrition, Whiteside says.

Current Tippecanoe managers who began at Lilly attest to significant cultural adjustment after the acquisition. They also remember a sense of relief once they figured out what the new owner was all about.

Theresa J. Ledbetter, a project team manager at the plant, recalls that when news of a planned sale came to light in 2009, “The first thing everyone here did was run to their computers and Google the name Evonik.” They learned that they would be going into the contract API manufacturing business.

“Our initial response was that this would be a big change,” she says. “Then came a feeling of optimism because it seemed to make sense. Cautious optimism. There are a lot of smart people whose careers and families depend on this place.”

The culture change was next. “When you first jump in, you have no idea,” Ledbetter says. “You think, ‘Okay, more customers doing what we always did but with more people.’ ” Staff soon realized it isn’t that simple, she says. “When you are captive, the goals are all internal. When it becomes customer service, you have to start thinking about what I would want if I were the customer. It’s a completely new mentality.”

The first thing everyone here did was run to their computers and Google the name Evonik.
Theresa J. Ledbetter, project team manager, Evonik’s Tippecanoe facility

Ledbetter began working at Lilly about two years before plans to sell the plant were announced. “I was a process engineer supporting several small-molecule manufacturing areas,” she says. “It’s not what you want to hear in your first job.” Now she heads a team of five project managers, each of whom is dedicated to specific customers.

Bryce A. Hufford, a director of small-molecule manufacturing at Evonik who started at Lilly in 1998 and came to Tippecanoe in 2001, agrees that anxiety percolated across the plant after Lilly announced the sale. Evonik was a mystery company. But Googling it was reassuring. He had heard of Degussa, Evonik’s predecessor company, and in recent years had become familiar with the outsourcing trend in the drug industry.

“I very quickly recognized that Evonik was a CMO,” he says. “So now our business would be serving customers other than Lilly. My first thought was that this is exciting. It would create a lot of opportunities.”

Becoming a CMO took time, Ledbetter and Hufford acknowledge. Easing the transition, much of the activity in the first few years was on behalf of the former owner. “It gave us time to make the transition,” Ledbetter says. “We could have pulled the Band-Aid and gone right away, but we had a lot of new systems to learn. We had to learn about Evonik.” The relationship with Lilly began changing soon after the sale, however, Hufford says. “Our interaction with former colleagues at Lilly—something was different,” Hufford recalls about the change. “We had to make sure things went through the right channels,” he says. “Not that we don’t still know some people there, but now we have more formal mechanisms for communication.”

New customers emerged, and Whiteside, Ledbetter, and Hufford agree that Lilly is now much like the others when it comes to working for a company under contract.

James Bruno, president of the consulting firm Chemical & Pharmaceutical Solutions, is familiar with some of the projects that Evonik has undertaken for new biotech industry customers.

Size is a consideration, says Bruno, and working with a large company at a large plant involves bureaucracy that can be avoided at smaller contractors. “But people go there because they are Evonik, and they think they will get more consistent and better product. And often they do.”

Bruno adds that the Midwest location is an asset for U.S. biotech customers.

Like any CMO, Evonik has a fine line to walk between developing new customer relationships and supporting important existing ones. Anchor customers can’t be taken for granted, Whiteside says. “Lilly could easily have taken the business out. They are not tied to us in any way. We won the new contract on merit.” Evonik works with Lilly now just as it does with any of its other customers, according to Whiteside. “They treat us as a preferred supplier,” he says, “but nevertheless as a supplier.”