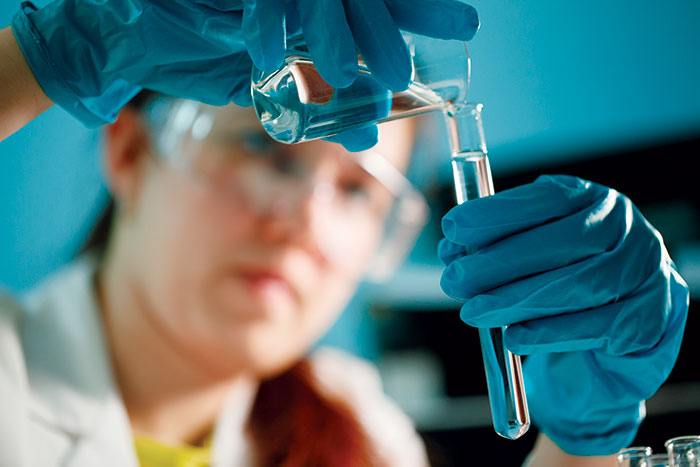 Credit: Shutterstock
University-generated chemical and materials start-ups are finding new support as corporations look to them for technology.

Glenn Vonk used to head Becton Dickinson’s BioVenture Centre in Singapore, where he oversaw new technology development, collaborations with outside partners, and acquisitions. When he returned to the U.S. in 2012, the Ph.D. chemist’s responsibilities included assessing and investing in start-ups whose technologies could be of use to the medical device firm.

Vonk’s duties brought him to meetings of the National Council of Entrepreneurial Tech Transfer (NCET2), an association of university technology commercialization officers and large corporations. At these events, upward of 150 university-launched start-ups would pitch their technology to corporate investors. “The universities were unhappy with us,” he recalls.

“Often the start-ups were not at all aligned to what I and other corporate investors were interested in doing,” Vonk says. Both the business and the academic folks, he adds, were not making the most productive use of their time.

Corporations and universities often don’t see eye to eye. The two have been known to quarrel over technology licensing fees and the influence that corporations can assert over university research. But as corporations increasingly turn to start-ups for new ideas and approaches to business problems, universities and big business are learning how to better support fledgling companies started by academics.

Only time will tell if the two are successful in creating viable start-ups in the chemical and materials fields. But NCET2 and, separately, institutions like Massachusetts Institute of Technology and Pennsylvania State University are taking steps that could significantly boost the development of start-ups, often with the help of corporate partners.

Vonk left Becton Dickinson and today is director of business development and alliances at NCET2, bringing his corporate chops to the council. He is part of a team at the group that enlists corporate technology mavens to give universities an early read on whether technology developed on campus has a shot at success.

Vonk espouses an approach to developing new technology that’s become widespread in the pharmaceutical industry but not so much in the chemical and materials space. Drug firms frequently invest in start-up firms, fund their research, and later acquire them or their most promising compounds. They often do so through close ties with academia and venture capital firms.

That’s because big corporations are good at building existing businesses but are often not so good at developing new technology, Vonk notes. With start-ups, the equation is different.

Whether they succeed or not, start-up entrepreneurs “are passionate and committed” to their unique technology, and they know they have limited time to succeed before the money runs out, Vonk says. In addition, start-ups leverage “external money”—such as venture capital and federal and state small-business development grants—to try to prove a technology.

About a year ago, Vonk and Tony Stanco, executive director of NCET2, launched the council’s IP2Startup program. Its mission: to identify university intellectual property for start-up formation with feedback from Fortune 500 companies.

Besides Vonk’s run-ins with university technology officers, another inspiration for the program was meeting with members of Congress who are active in technology transfer, competitiveness, and entrepreneurship caucuses. The government spends about $130 billion annually on university and national lab research, and very little of it is ever commercialized, Stanco points out. Caucus members suggested that the start-up community could help.

Universities tend to concentrate on licensing technology for a fee rather than the more arduous task of launching new businesses. “Start-ups are not their main focus,” Stanco says. That’s where NCET2 comes in.

Each year, NCET2 solicits about 200 member universities to submit descriptions of promising technology developed at the schools. Corporate reviewers rate the technology, and other business people experienced with start-up formation chime in on whether they think the technology can become a $100 million-a-year product or service.

Stanco says the goal is to get a start-up running in three months.

The experienced businesspeople he pulls in on the review—retired executives, angel investors, and serial entrepreneurs—are what he calls strategic development officers. The objective, he says, is to get these officers positioned as advisers to the start-ups or on their boards so they can help the young firms make business decisions and connect them to available financing.

NCET2 has a five-step plan to speed academic technology commercialization

Universities, corporate reviewers, and strategic development officers use intellectual property evaluation forms to rate potential start-ups. The forms were developed by Victoria Scarborough, a former external technology team director for the paint maker Sherwin-Williams who is now an officer with the NCET2 program.

Giving corporate reviewers an early glance at intellectual property is one of the most important elements of the program, Scarborough says. “They know what type of intellectual property they care about and have a good eye for market opportunities. If they don’t care, then there’s no market for it,” she says.

NCET2 is planning a Demo Day in May at which more than 500 start-ups at different development stages will be looking for validation and funding from corporations, venture capitalists, and angel investors.

About 35 corporations are NCET2 members, Stanco says, including chemical firms such as BASF, DuPont, and Evonik Industries. He considers the complete list of corporate members, who foot a large part of NCET2’s bills, proprietary. When the organization used to publish the list, universities not in the council would try to poach from it, he says.

Among the universities with their own programs to match corporations with start-ups is MIT. “We’ve seen an increase in interest among corporations in university start-ups,” says Karl Koster, corporate relations executive director for MIT’s Industrial Liaison Program. Corporations view start-ups as a way to “derisk technology coming out of the university,” he says.

There are companies who would like nothing better than for us to be their research arm. But that’s not our mission.
Karl Koster, corporate relations executive director, MIT

MIT, Koster says, files about 400 patents each year on behalf of university inventors. While not all those patents lead to new products, those that do get there only after corporations or start-ups have spent 10-plus years and millions of dollars to develop them, he points out.

To help corporations that are interested in meeting with MIT spin-offs, two years ago the university created a start-up exchange to track 280 companies that license MIT technology. The university will introduce companies to start-ups, but they must be members of the liaison program. About 250 firms pay $75,000 a year to be members.

Corporate executives are invited to get-togethers focused on MIT start-ups, but the events “are not an effort to fund the start-ups,” Koster says. Instead, MIT expects that such meetings will give start-ups insight into the market.

Gatherings with the heads of R&D at firms like Dow Chemical, General Electric, and Pfizer are invaluable for start-ups, Koster notes. “You can’t get that opportunity from a venture capital firm.” Ultimately, he says, the meetings could turn into partnerships, but that’s not MIT’s primary goal.

“There are companies who would like nothing better than for us to be their research arm,” Koster says. “But that’s not our mission. We’re generating graduate students to advance knowledge over a four- to five-year time frame.” Corporations are often looking for a much quicker turnaround, he says.

Other universities that don’t have the research firepower of MIT are also working to better connect start-ups with corporations. James Delattre, director of Penn State’s office of entrepreneurship and commercialization, says the school recently initiated a no-fee program to link corporations with university research.

Although Penn State doesn’t yet participate in NCET2’s IP2Startup program, Delattre agrees that the idea is a good one. “Industry often has a good perspective on how intellectual property could be best positioned,” he says.

One industry innovation scout who sees a benefit to the NCET2 approach is Werner Kaufmann of the German chemical maker BASF, an NCET2 supporter. He notes a general trend among chemical and materials firms to do more with start-ups but admits “we are not at the same level” as the pharmaceutical industry in engaging with nascent businesses.

While the company often helps fund more mature start-ups, it rarely gets involved in those just on the cusp of formation, Kaufmann says. For many start-ups, a speedy yes or no on funding is important, and BASF is not set up for such quick decision-making.

But BASF does get involved through NCET2 and offers early advice. Kaufmann takes several hours to review the periodic technology information packets that come from NCET2. “Maybe two of 10 per set could be of interest,” he says.

Evonik Venture Capital investment manager Eric Breese also acknowledges that it is difficult for the chemical and materials maker he works for to invest seed money in early start-ups. But for start-ups that fit Evonik’s business strategy, the company can quickly give them “access to markets that they don’t have.”

What NCET2 is giving Evonik and other corporations is access to start-up technology from a more extensive network of universities than they can access on their own. “For us, a win is a relationship with a start-up, not necessarily an investment,” Breese says.

CORRECTION: This article was updated on June 20, 2018, to correct some statistics about MIT. The university files 400 patents annually, not 800; its start-up exchange tracks 280 companies that license MIT technology, not 1,600; and 250 firms participate in its industrial liaison program, not 275.

Business
Corporations pledge aid to start-ups
Business
Investment Firms Nurture University Start-ups
Business
Chemical Makers Will Boost R&D But Slice Capital Spending In 2015
Share X
To send an e-mail to multiple recipients, separate e-mail addresses with a comma, semicolon, or both.
Title: Ensuring start-ups launch in the middle ground between the ivory tower and the business trenches
Author: Marc S. Reisch
Chemical & Engineering News will not share your email address with any other person or company.